The Centre of Attention

The Centre of Attention, London

3 short consecutive exhibitions, each presenting 2 different artists. Part 2: Tai Shani vs Kristian Hornsleth. Versus brings together 2 artists working in different disciplines vs is a clash, a complement, a synthesis, a blind date and throws up a new visual stimulus, a new mental conundrum and fresh ideas. Part 3: Otiose vs Marty St James, part 1: Thomas Raschke vs Abigail Durrant. 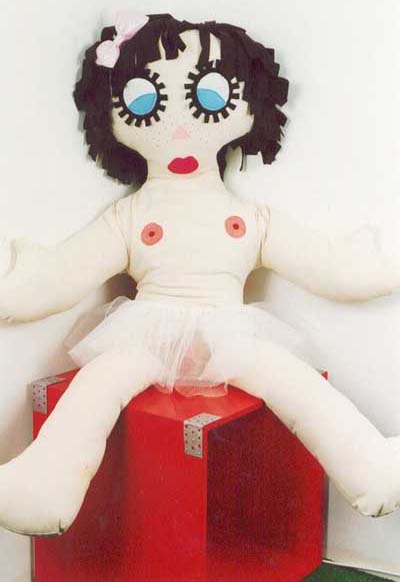 The Centre of Attention presents versus 3 short consecutive exhibitions, each presenting 2 different artists vs brings together 2 artists working in different disciplines vs is a clash, a complement, a synthesis, a blind date and throws up a new visual stimulus, a new mental conundrum and fresh ideas. vs highlights the fierce competition of the art world, altogether as fierce as biological or commercial imperatives.
vs: someone has to win.

Tai Shani
Tai Shani studied fashion design and fashion photography in New York and Tel Aviv where she has worked for major style magazines. She has shown her work at the Haifa Museum, at the Haus am LÃ¼tzowplatz and at Novalog, Berlin. In 2001, she had a solo show "Axl Rose you rock my world" at the Tal Esther Gallery, Tel-Aviv. She recently moved to London.

Tai Shani's videos, photographs and installations reflect the construction of gender. They especially examine how a body becomes sexed. They do not only recreate the female body from the viewpoint of "to-be-looked-at", but they also exemplify the deformation of body and identity resulting from this perspective. They thereby underline the power of definition that fashion has and portray pop as a field on which this power is executed.

Kristian Hornsleth
"Selected posters, large photocopies and other readymade materials are mounted on the canvas as contextual background. An important feature is the cut holes. Most of the work has been brutally cut and heavily scratched with sharp objects. This action is an intention to add an extra color, an additional branding control and not mention a Fontanian and Twomblyan fartherly respect."

"The concept was from the begining to combine an extreme subjective Rorschackian drive for painting itself with a conceptual idea to adapt an over visible brand-ID. All in line of the general research of the deconstruction of the power distribution between art viewer, producer, buyer and opinion makers."

"The paintings are mostly heavy expressionistic overkillish as well as sensational and statement oriented. With time this style has proven itself to have a market to well of-young-self-confident-business-types-who-normally-thinks-that-art-is fucking-boring."

"A consistent sales channel was opened. Some buyers and gallerists complained a little about the branding in the form of a huge Hornsleth signature which covered up to a third of the painting, but this proved not to be a problem of the consumer interest. After a while most of the art lovers who has bought a Hornsleth work tells us that they see the brand as an equal component in the painting composition." Hornsleth

Kristian Hornsleth has been shown extensively on the continent and in New York. This is his first London show.

stampa
permanent link
The Centre of Attention
IN ARCHIVIO [17]