The show explores the echoes and borrowings of historical avant-garde practices and features an array of works from 1936 through 2009 by a range of artists such as Duchamp, Ernst, Dali, Rauschenberg, Cornell, Motherwell, Horn, Berlant, and Sutil, among others. It combines diverse technical and aesthetic approaches, and uses paintings, graphics, mixed media collages, and sculptural assemblages to illustrate alternative modes of representation. 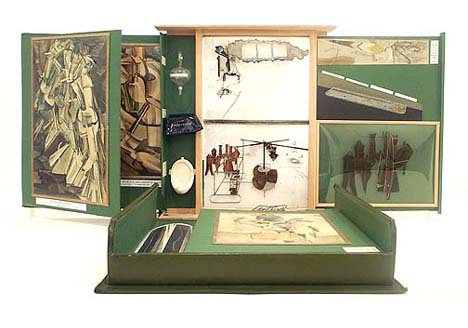 Since the turn of the Twentieth Century, artists have been breaking conventional thoughts of the “high” art media of painting. They have experimented with alternative modes of representation. Among the first most significant breakthroughs were Cubist innovations - including George Braque’s introduction of words and papiers collé in his paintings, and Pablo Picasso’s invention of collage and incorporation of unorthodox materials in his still life compositions.

These explorations later attracted the Dadaist and Surrealist artists, who began experimenting with challenging and provocative assemblages created from found objects. As they embraced the absurd, the new and unexpected, the use of extraneous juxtapositions soon became common devices in their works. French artist Marcel Duchamp played a central role in promoting these modern trends. Such experimental methods of the first half of the twentieth century had profound impact in the development of modern art and in many ways continue to inform contemporary art practices.

Both intriguing and eclectic, LAYERED/BOXED explores the echoes and borrowings of these historical avant-garde practices. The exhibition features an array of works from 1936 through 2009 by a range of artists – from modern artists such as Duchamp, Ernst, Dali, Rauschenberg, Cornell, Motherwell, Gottlieb, Schwitters, Nevelson, Schendel, Bearden to contemporary artists such as Horn, Porter, Pfaff, Reice, Jaudel, Walter, Berlant, and Sutil, among others. It combines diverse technical and aesthetic approaches, and uses paintings, graphics, mixed media collages, and sculptural assemblages to illustrate alternative modes of representation.

Among the highlights of the exhibition is a work by the influential artist Marcel Duchamp, entitled Boite-Series G, 1968. This piece consists of a green leather valise containing eighty items, including various miniature replicas of the artist’s celebrated ready-mades and reproductions of his most precious and prominent paintings. The result is a fascinating and intricate assemblage, intended as a small and portable museum. Also in the spotlight is a quintessential work by noted artist Joseph Cornell, where he presents a box assemblage in which personal objects enveloped with a nostalgic quality are placed in irrational juxtapositions. By collecting and carefully placing disparate, found objects in his boxes, Cornell creates enchanting and mysterious treasures that reveal his innermost memories, dreams, and fantasies.

Means of expression in boxes is also manifested in Louise Nevelson’s Sky Case XII, 1974, assembled from found wooden objects – in this case, fragments of furniture and everyday discarded things. Another magnificent work in the exhibition that illustrates the practice of reordering the ordinary is La Lumière Descend de L’Ombrelle Aux Moissons, 1969, by modern master Max Ernst. In this minimal assemblage on painted wooden panel, Ernst uses the possibilities of the medium of collage to create an irrational and surreal composition.

This technique is also exemplified in Draftsman, 1967, an exquisite work by Robert Motherwell, where he experiments with layered surfaces, introducing cut-pasted paper and commercial labels in his composition. By appropriating simple and every day materials into his work, Motherwell provides the viewer with a visual autobiography. Equally fascinating is Mira Schendel’s Minimal untitled work, from 1986. Here the artist cuts out flat and simple geometric shapes, which she then glues on a plain white sheet of paper that she uses as support. In doing so, she emphasizes spatial relationships and uses basic forms as metaphors for voices and ideas.

In this manner, LAYERED/BOXED highlights and celebrates the liberation of Twentieth Century artistic concepts and processes. Each work in this multi-faceted exhibition reveals individualistic and experimental approaches that transcend traditional conventions and stimulate the imagination of the spectator. Ultimately, the viewer is invited to think outside the box.