Masqueteros. The show aims to expand the ongoing inquiry regarding the context, subjects, and sources of the artist's late work. Building on new research into the artist's late life through the presentation of selected paintings and prints spanning 1962-1972, the exhibition suggests how the portrayal of the aged Picasso, bound to the past in his life and painting, has obscured the highly innovative and contemporary nature of the late work. 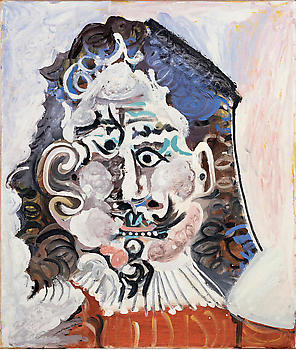 I enjoy myself to no end inventing these stories. I spend hour after hour while I draw, observing my creatures and thinking about the mad things they're up to.
--Pablo Picasso, 1968

"Picasso: Mosqueteros" is the first exhibition in the United States to focus on the late paintings since "Picasso: The Last Years: 1963-1973" at the Solomon R. Guggenheim Museum in 1984. Organized around a large group of important, rarely seen works from the collection of Bernard Ruiz-Picasso, as well as works from The Museum of Modern Art, New York, the Museo Picasso Málaga and other private collections, "Picasso: Mosqueteros" aims to expand the ongoing inquiry regarding the context, subjects, and sources of the artist's late work. Building on new research into the artist's late life through the presentation of selected paintings and prints spanning 1962-1972, the exhibition suggests how the portrayal of the aged Picasso, bound to the past in his life and painting, has obscured the highly innovative and contemporary nature of the late work.

The tertulia, an Iberian tradition of gregarious social gatherings with literary or artistic overtones, played a major part in Picasso's everyday life, even after he moved to the relative seclusion of Notre-Dame-de-Vie in the 1960s. The inner circle of Picasso's last years differed from its precedents in that, in addition to the writers and artists whom Picasso had always favored, it included a contingent of imaginary personages—musketeers, matadors, cavaliers, prostitutes, circus performers – borrowed from the history of art or developed in conversation with his friends. These characters, who fill the late paintings and prints, were drawn from a vast array of sources, from the old masters to the media. As a body of work, Picasso's late period is among the greatest demonstrations of his constant invention of the new, in terms of style, technique, and subject and, indeed, in relation to the history of his own creative output.

One figure who appears both in the imaginary world of the tertulia, and stripped of all pretense in the pictorial present, is Jacqueline Roque: muse, wife, and constant companion of Picasso during his late years. For all his prior attention to the nude, the scale and anatomical frankness of the late pictures, in which a Jacqueline-like odalisque is subjected to every manner of scrutiny, is unprecedented. Their increasing sexual explicitness, whether a symptom of sublimated impotence or simply one of modern candor, is just one instance of Picasso's awareness of the radical changes in contemporary art and culture in the late sixties and early seventies.

Looking afresh at the late work in the context of Picasso's life at Notre-Dame-de-Vie and the political climate of the time reveals the great artist to have been as aware of, and responsive to, the upheavals of the day as he was absorbed in the history of art and his own memories. Views about the last period in Picasso's long career have clearly begun to shift. But the final stage of his life, and the work that he produced during it, have yet to receive the attention that they warrant. "Picasso: Mosqueteros" aims to spur renewed interest in both.

The exhibition is curated by John Richardson, Picasso's celebrated biographer, whose third volume of A Life of Picasso was published in 2007, and Dakin Hart, former Assistant Director of the Nasher Sculpture Center, Dallas, now a PhD scholar working on Picasso at the Institute of Fine Arts in New York. An extensively illustrated book with essays by John Richardson, Dakin Hart, Memory Holloway, Assistant Professor in Art History at the University of Massachusetts, Dartmouth, and artist Jeff Koons will be published to accompany the exhibition. Several important but previously untranslated texts from the seventies will complete this vital resource on Picasso's late work. The exhibition design is by New York-based architect Annabelle Seldorf.