Free Mumia. The artist is showing two video works and a towel. Similar to the tradition of cultural anthropology, her camera appears to follow people at random in public places, or inconspicuously watches events from the sidelines and records social encounters. In this way, patterns of societal interaction at the periphery of raves and other large-scale events are revealed. Her work characteristically makes use of a hand-held camera that reacts to movements in the crowd, tracing their aimlessness and drawing the viewer into what is going on. 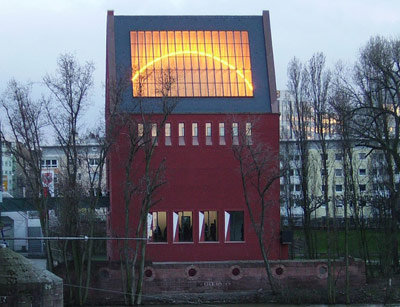 In her exhibition at Portikus, Nina Könnemann is showing two video works and a towel. The artist came to prominence above all with documentary videos like M.U.D. (2000), unrise (2001) and Pleasure Beach (2001) in which she takes an unmediated look at phenomena of the postmodern amusement society. Similar to the tradition of cultural anthropology, her camera appears to follow people at random in public places, or inconspicuously watches events from the sidelines and records social encounters. In this way, patterns of societal interaction at the periphery of raves and other large-scale events are revealed. Könnemann's work characteristically makes use of a hand-held camera that reacts to movements in the crowd, tracing their aimlessness and drawing the viewer into what is going on.

In the show at Portikus, this fleeting point of view is brought to a standstill, focusing attention on three objects which - in among a wealth of details and inessentials - could have appeared in the videos mentioned above.

The video installation Laughing Sailor (2008) is based on an automated puppet from an amusement arcade in the British town of Southport. This and similar nostalgic sailor figures, more familiar to viewers today as props in horror films, are shaken by a laugh that grips the whole body as soon as a coin is inserted. In Laughing Sailor, this movement is translated in reduced, grid-like form into a 3D animation. With this reduction to digital tissue, Könnemann suspends any emotional-associative ties with the viewer and filters out everything except for movement. Furthermore, the film forces us as viewers into a particular position: we see the laughing of the sailor puppet as if we found ourselves inside its torso. The animation is presented on a concave projection surface that recalls panoramic cinemas and their promise of total immersion in the projected image.

The video work Cone (2008) was made in the English seaside resort of Blackpool. Having played a pioneering role in the amusement industry in the early twentieth century, becoming a major tourist destination for the British working class, time now seems to have come to a standstill in the city. One field in which innovations can be observed in Blackpool, however, is the market in novelties and disguises. Since the tourists who come for the weekend like to dress up, there is a constantly changing range of outfits and accessories. In the summer of 2008, the favorite was a hat in the shape of a traffic cone. In the video, the camera follows hats of this kind through the throng of partygoers - the camera itself being hidden in such a cone - incidentally capturing life on the streets at night and the surrounding sounds: music blasting out of open pubs, scraps of conversation, and undefined noise.

The third element of the exhibition, Basketball-Handtuch (Basketball Towel, 2009), was inspired by this hat and by a similarly marginal trend. During a trip to Madagascar, the artist noted: "When I was here for the first time in 2004, I noticed that instead of traditional robes, many man wore large beach towels. Especially popular is a neon-pink towel with sprayed on flowers. It is produced in China and sold by itinerant merchants. Returning two years later, I find that a dark red towel with a basketball pattern is now the most popular." Könnemann's idea with Basketball-Handtuch was to produce an item that could be sold in both Madagascar and Blackpool; an object that can be imagined as a synthesis of the fleeting fashions of the towel-robe and the cone-hat. The deliberate indeterminacy generated by this combination links the towel with Nina Könnemann's earlier works. For the Free Mumia exhibition, the basketball towel was produced as an edition for Portikus.

Nina Könnemann was born in Bonn in 1971 and studied at Hamburg Academy of Fine Arts from 1992 through 1998.

The exhibition will be accompanied by a catalogue documenting the project.