The initial impetus for this exhibition was the question if visual art as a medium of critical analysis can reflect the American situation, in larger historical terms, or in a more narrow sense, as a response to the last decade or in respect to imminent changes. While the exhibition is hardly about the enormous political and cultural transformation that has taken place in America during the past year, culminating in Barack Obama's election for the next presidency, it is greatly inspired by that decisive shift. On display recent works which allude to carnivalesque realities: sculptures, installations, paintings, photographs and videos which access, but also seriously transform, carnivalesque showmanship, excess, and spectacle. 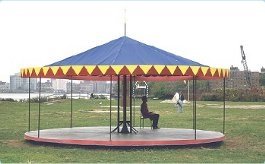 The initial impetus for this exhibition was the question if visual art as a medium of critical analysis can reflect the American situation, in larger historical terms, or in a more narrow sense, as a response to the last decade or in respect to imminent changes. While the exhibition is hardly about the enormous political and cultural transformation that has taken place in America during the past year, culminating in Barack Obama’s election for the next presidency, it is greatly inspired by that decisive shift.

Carnival Within will take as its theme the belief in transformation—the very motto that helped Obama win the election: “Change. The change we need. Change we can believe in.” At pivotal moments throughout its complex history, and against many odds, America has shown its capability to evolve and transform itself, never so much as right now, when what often seemed unlikely, even outrageously so, has come to pass: the election of the country’s first African-American president, with his promise of sweeping ideational, ethical, and generational change. At the heart of the American aptitude for regeneration and renewal is an against-the-odds belief that a seemingly intractable norm can be waylaid and suspended, that grievous errors can be rectified, and that wondrous new potentials are possible.

In a culture whose underpinning themes, values, and ideas can still be traced to the religious utopianism of the radical Puritans who fled Europe to settle in what is now Massachusetts in 1620, it is worth recalling that an abiding interest in transformation has also often taken raucous carnivalesque forms. The first great showman in America, P. T. Barnum, was in fact a contemporary of the first great theorist of radical art-making in the country, the spiritually inclined poet/philosopher Ralph Waldo Emerson (who was an extreme yet direct heir of Puritan thought and theology). Emerson had a profound impact, affecting writers in his immediate circle like Henry David Thoreau (author of Walden) and poet Walt Whitman, as well as the Hudson River School romantic painters and various painters of the American West, but his influence continued many years later and is still apparent now. Barnum’s influence has been equally durable and profound, and can be discerned in 19th-century road shows and freak shows, George Washington Gale Ferris, Jr. (who invented a famous wheel), Coney Island, Hollywood and the big screen, Wild West City in New Jersey, Holy Land Experience in Florida, Disney extravaganzas, Las Vegas at night rising out of the desert, and countless small-town amusement parks. Given this Barnumesque influence in American culture, it may also be possible to speak of an advanced carnival art operating now, in different media and manners. That is exactly what Carnival Within focuses on: an exhibition of American carnivalesque art at a time of profound transformation and catharsis. Excess, exaggeration, hyperbole, exuberance, and parody are intrinsic to this carnival art, which also scrambles distinctions between high and low, sacred and profane, thoughtfulness and ridiculousness.

The exhibition will bring together recent works of art made in America which allude to carnivalesque realities: sculptures, installations, paintings, photographs and videos which access, but also seriously transform, carnivalesque showmanship, excess, and spectacle. Within that context the art works touch upon issues of utopianism, faith, racial, gender, and environmental concerns, consumerism, and violence, among many others. Throughout the exhibition, the ordinary and mundane are transformed into something spectacular and promising, and things of wonder emerge from contexts which might otherwise seem familiar and banal. The exhibition will include the following artists: Janine Antoni, Joe Amrhein, Tracey Baran, Sanford Biggers, Laura Bruce, Chamecki-Lerner (Rosane Chamecki, Phil Harder, Andrea Lerner), Anne Chu, Spencer Finch, David Herbert, Joan Jonas, Nina Katchadourian, Karyn Olivier, Joyce Pensato, William Pope.L, Nadine Robinson, and Lawrence Weiner. Moreover, while the works will be broadly diverse, spanning different media and strategies, they will cohere as riveting individual approaches to centrally carnivalesque impulses.

When it comes to these carnivalesque impulses it is also worth recalling the Russian critic Mikhail Bakhtin, and especially his ideas on the carnival and carnivalization. In Bakhtin’s terms, the “carnivalized moment” or the “carnivalized situation” are those moments when the normal rules, values, hierarchies, and modes of apprehension are temporarily suspended in favor of a new freedom, which can be simultaneously ungainly and exhilarating, bewildering and liberating. These carnivalized moments do not seek to transcend normal life; they do not try to substitute a keen new consciousness for an enervated one. Instead, both mundane and carnivalized life exist together, and people move between the two, entering the carnivalized situation in order to be tested and transformed, and then returning to normal life—perhaps shaken, perhaps deepened—with some wisdom gained. An eccentric carnival impulse will be apparent in every work on display in this exhibition—involving free-spirited play and buffoonery, which, in Bakhtin’s terms, “combines the sacred with the profane, the lofty with the low, the great with the insignificant, the wise with the stupid.”

The exhibition is supported by the Hauptstadtkulturfonds.

Introduction by
Peter R. Claussen
Cultural Attaché of the Embassy of the United States of America