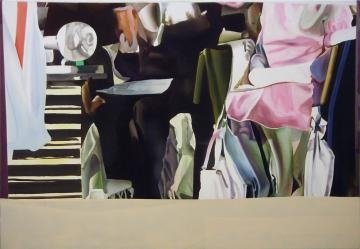 Fabian & Claude Walter are presenting a new series of paintings and assemblages by Robert Suermondt. Under the heading 'Contrebande', signifying the unlawful movement of goods across a border, the artist questions the inherent function and meaning of familiar images particular to Western society. Using photographs sourced from mass media as his point of departure, the artist investigates the exchange between the image and the viewer taking into consideration the historical, religious and sociological associations these images evoke. By working against the laws of attraction, clarity and completeness when translating the 'image trouvée' into painting, Suermondt deliberately introduces an element of uncertainty thus hampering the immediate interpretation and understanding of the image. The artist resists the dogma of visual representation thereby creating a visual paradox.

Robert Suermondt selects and represents unusual picture fragments rather than offering a general view of an event or object. Visually highlighted frames and meaningful stills from contemporary urban life - frequently not in their original orientation - are assembled and blended to form new and seemingly fleeting visions of larger realities. The paintings demand more than just fleeting attention and speak to the viewer in riddles.

Suermondt's visual language puts a strong emphasis on human body language. Gestures are emphasised: hands touching, the arm of a journalist expectantly stretching a microphone towards an unidentifiable target, fists rearing up in protest. Movement, atmosphere and body language form an alphabet that remains understandable across culture, time and language borders. Suermondt often excludes heads or replaces them with alternative signs and readable spaces, 'a little in the manner of Rorschach,' he muses, 'in order to adjourn or even suspend an identification with the image; these gaps are incompletenesses enabling the viewer's gaze to circulate on the picture surface.'

Robert Suermondt's primary image source is the daily press, mostly small black and white press clippings which he transfers to canvases of frequently considerable dimensions. One such example is Crash. The first page of a daily paper featuring the picture of a train accident caught his attention: 'What struck me was how this image immediately brought to mind the descent from the cross. I was fascinated by the possibility of transferring into painting the complexity of an image offering two different interpretations, and thereby playing with the confrontation of two modes of belief, that of the religious image, the 'divine' image, and that of the photographic press image.' In his opinion press images reflect a certain social reality while at the same time interpreting it.

The artist's perception of found images is distorted by a notion of their limits and a questioning of their framework. When a picture seems complete and self-sufficient, Robert Suermondt is tempted to add an element of difference. He encourages a detached and unbiased approach to images: 'My work is rather about replaying familiar modes of representing images, then changing them and conceiving paradoxical and totally new layouts.' He manages to lead the viewer's perception through contradictory stages, from the overall view of the painting, with its promise of a unified meaning, to a slow realisation that the details do not properly join up to confirm that first fleeting interpretation. The image simply escapes the viewer's grasp. Suermondt envisions that 'in order for the image to enter the viewer's mind, in order for them to establish a connection with the picture, it must pass through the movement of their own body.'

Biography: Robert Suermondt, born in Geneva in 1961, lives and works in The Hague and Brussels. He graduated from the Ecole Supérieure d'Arts Visuels Geneva in 1988, deepening his studies at the Rijksakademie van Beeldende Kunsten Amsterdam between 1990 to 1992. He has received a number of international awards, most recently the Prix Meret Oppenheim in 2006. The artist regularly has one person and group shows in European commercial galleries. In 2008 he showed at the Byzantine and Christian Museum of Athens (GR) and the Stedelijk Museum van Lier (B).