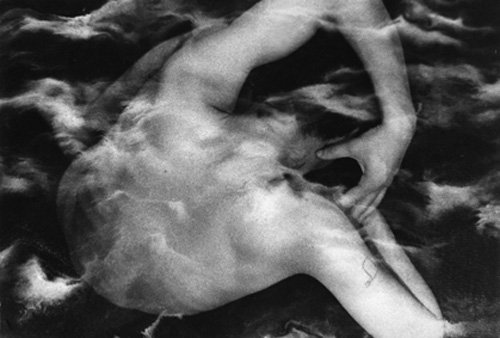 "Mr. Cadoo, you are not a photographer; you are a poet with a camera." Edith Piaf

Anya Stonelake / White Space Gallery are to present the UK's first exhibition of works by photographer Emil Cadoo, focusing on his seminal period of the 1960s-70s.

Born in Brooklyn, New York, Emil Cadoo (1926 - 2002) was one of the defining photographers of the 1960s. In May 1960 he emigrated to Paris, not only to escape the racism of America at that time, but also finding that (as a homosexual) the city offered far more freedom both to live and work. Except for an extended trip back to New York in 1965, he remained in Paris for the rest of his life, working both independently as an artist-photographer, and also for publications such as Life, the French Vogue and more.

A defining characteristic of Cadoo's work was his harnessing of the multiple exposure - often combining images of statues, the human or botanical form with more abstract images of varying textures - to give a sense of displaced layering, both intellectually and emotionally. To make such works he would frequently walk together with the person to be portrayed until they found a wall or surface whose texture he felt was expressive of what he wanted to say, seeing always a definite meaning, mood or attitude in the textures against which he depicted his subjects. Cadoo often spoke of his aim to express the most 'inner fiber' of the person he was depicting, though many see his use of the double exposure - especially when linked to series such as the 1964 Children of Harlem - as a metaphor and embodiment of Cadoo's sense of personal displacement in respect to his racial and sexual identity. It was also this characteristic, particularly in his erotic works, that brought him to become somewhat of a 'cause-célèbre' in the USA in the 1960s in the fight against artistic censorship, inextricably binding him to the social developments in America at that time, despite his foreign residency.

In April 1964, all 21,000 copies of the April/May issue no.32 of the American magazine Evergreen Review - containing (among others) texts by Norman Mailer, Jean Genet, William Burroughs, Bryon Gysin, Michael McClure, Karl Shapiro (a who's who of the day's practitioners of perceived outrage), and an erotic photo-essay by Cadoo - was seized by the police whilst it was still being bound. The edition had been deemed 'obscene' by the county's district Attorney, whose particular disapproval was leveled at Cadoo. It took the special intermission of Edward Steichen, who compared the images to the work of Auguste Rodin "the greatest living sculptor of our time", to obtain the condemnation of three judges of this action as 'unconstitutional', and to return the magazine to the public domain.

Throughout the 1960s and later, Cadoo produced whole series of photo-essays on leading black cultural figures and friends including Duke Ellington, Ray Charles and the writer James Baldwin (whom he portrayed almost as frequently as he did himself), but also including the French singer Edith Piaf, whom he captured in one of her last performances at The Olympia. Interestingly, his sources and inspiration for pose and expression were frequently closer to traditional sources found in western art than the contemporary fashion for commercialism and Pop Art; at times, his source was the art itself, such as in the series Reverie or Statue, where Cadoo took the idealised classical heads found in public sculpture and cemeteries as his subject. Incorporating into these faces the double or superimposed leaves, watery striations, wood, grain or wash effects evoking a sense of introspective and memorialised dignity.

Throughout his work, one sees in Cadoo's images an interest in the human over the political, the personal over the documentary, and the classical rather than the contemporary as an overriding background source. Whether as a result of his personal circumstances or not, the human body is consistently the site of his focus and means of communication. As Cadoo himself said, "Only when an artist in any field touches universals can it last through time, can it survive the destruction of things".