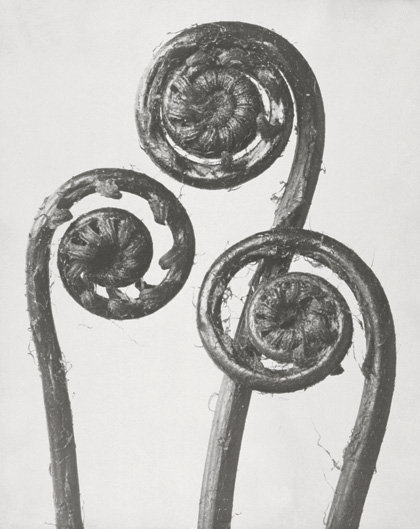 The exhibition will present for the first time in this volume the famous and influential plant studies by Karl Blossfeldt (1865-1932) from the collection of the Berlin University of the Arts as original prints in Cologne. Blossfeldt's photographs will be accompanied by the artist's herbaria and sculptures based on plants, the latter produced in cooperation with his teacher Moritz Meurer. The amalgamation and presentation of the various groups of work from the Berlin Blossfeldt collection provides detailed insight into the working style of the artist, who taught the study of natural forms in Berlin for over thirty years. His plant photographs were used primarily as reference aids during lessons in his classes. It was only towards the end of his working life that his photographs became known to the larger public through an exhibition at the Galerie Nierendorf in Berlin in 1926.The publication of the book Art Forms in Nature in 1928 led to an ongoing appreciation of his photographs. Karl Blossfeldt developed in year-long concentration on one theme a highly aesthetic picture language which up until today still fascinates the viewer with its clarity and focus on the object.

The exhibition highlights the topic of plant studies against a background of research into form and structure using selected historical and contemporary works. They mirror the development and technical possibilities of the medium, as well as the artistic reflection into their characteristics and decorative aspects. Thus the scope of the 300 exhibits reaches from detailed analyses of the form of individual botanical structures to the documentation of complex natural and populated areas, up to a symbolic contemplation of plants.

Framework - A Glimpse at the Collection
The presentation gives Die Photographische Sammlung once again an opportunity to draw attention to its own institutional orientation. In addition to the co-operation on the work by Karl Blossfeldt these include avant-garde objective and conceptual photographic works, which developed in particular in line with the sense of a new era in the 1920s and the 1960s/1970s or are artistically related to them. Works which the Cologne institution purchased during the past years in connection with the botanical subject or were obtained as permanent loans, are now part of the current presentation. They include works by Pietro Guidi, August Kotzsch, Paul Dobe, works from the Folkwang-Auriga Verlag, by Fred Koch, Albert Renger-Patzsch, Else Thalemann, August Sander, Ruth Lauterbach-Baehnisch, Ruth Hallensleben, Dr. Herbert W. Franke and Lawrence Beck. Although works by the younger artists Natascha Borowsky and Simone Nieweg are already part of the collection, in light of their more recent work both artists have made photographs from their own collections available for the show.

The current show is a thematically oriented insight into Die Photographische Sammlung's collection which ranges from the historical to the contemporary and in the last few years has been extended by a number of corresponding groups of photographic works. In order to provide a comprehensive, but lively background to Karl Blossfeld's work and to display illuminative positions, which were frequently mentioned in connection with the reception of Blossfeldt's work, but were rarely, if ever, presented together in exhibitions, and also to permit new assessments and links, important loans have been integrated into the exhibition. They have been borrowed from the Karl-Blossfeldt-Archiv/Ann and Jürgen Wilde, Zülpich, which contains the largest collection of original photographs by the artist.

Karl Blossfeldt and his teacher Moritz Meurer
Karl Blossfeldt received essential support from Moritz Meurer (1839-1916) who worked as a graphic artist and painter, and for whom Blossfeldt worked as an assistant in Rome from 1892 to 1895. On the basis of Meurer's concept, reference aids in the form of sculptures and drawings, as well as photographs, were developed for later use in lessons. Meurer's idea, to take the basic forms in nature, which could be seen in the composition of a plant, as models for architecture, artistic and craftwork objects or ornaments, was integrated by Blossfeldt into his photographs.

According to the records, attention was drawn to Karl Blossfeldt's work in particular by the fact that the Berlin gallerist Karl Nierendorf heard about his work and presented the first exhibition of his photographs outside the school context in 1926. The plant photographs, still under the influence of the ornamental art nouveau -- although more as a reaction to it -- were highly appreciated in the early days of New Objectivity. These studies seemed to put into practice the newly formed principles contained in the art of the 1920s, in which there was a demand for things to be presented without artistic digression, in a clear, authentic pictorial language, at the same time providing insight into their nature. It is therefore even more surprising that Blossfeldt was able to achieve this so easily, considering that he accomplished it seemingly uninfluenced by questions of artistic or photographic history categories. His motivation stemmed from his didactic and pragmatic aims to depict plant forms with precise accuracy, in order to provide flawless reference aids which would encourage his students to transform them artistically. His straightforward, passionate concentration on one theme, which he almost endlessly varied within a limited field, opened it up for comparative viewing. In particular since the 1970s, in the light of a new-orientation of the medium, his work was highly regarded and gained indirect influence on contemporary art, to the extent that knowledge of his images influences today's viewing perspectives.

On the occasion of the exhibition Plant Studies by Karl Blossfeldt and Related Works Die Photographische Sammlung/SK Stiftung Kultur is presenting on its website a directory they have created of all 631 photographs, 39 herbaria and 57 sculptures from the Universität der Künste's Karl Blossfeldt collection together with documents from the University archive. A distinctive feature of the research is the fact that every photograph is accompanied not only by a concordance of primary and secondary literature but also Blossfeldt negatives and transparencies from the Deutsche Fotothek in Dresden and, in the near future, from the Karl Blossfeldt Archive/Ann and Jürgen Wilde. The website provides a text forum on the topic, which uses selected documents to illustrate Blossfeldt's teaching work in the context of the history of the University and includes various aspects of his reception in publications and exhibitions.
http://www.blossfeldt.info