"Beyond the Picturesque" wants to investigate how the concept of 'the picturesque' can still (or again) be applied to artistic interpretations of the present landscape; the exhibition presents works of 24 artists. Dara Birnbaum: "Retrospective: the dark matter of media light", presents an emotionally loaded and highly critical insight into (American) society. Her work is a sustained search for a redefinition of what it can mean to be 'a woman' in a world evolving ever faster and overloaded with images. In his latest work, Satoru Eguchi breaks down the existing truth surrounding him and recreates some of its fragments in a 'man-made' world. 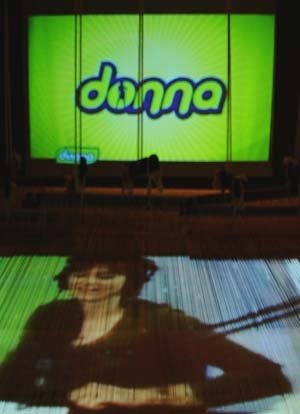 The concept of ‘the picturesque’ originated in the 18th century and was closely linked from the very start to that of the English landscape garden, which traded in the strict geometry of the French garden for a carefully recreated and staged image of nature.

The term ‘picturesque’ refers to a certain kind of landscape that was considered suitable as a subject for a painting, as well as to a part of reality that could be looked upon as if it were a painting. It is remarkable that a lot of contemporary artists are fascinated by the hybrid landscape in which the differences between centre and periphery, between city and countryside and between nature and culture are no longer clearly defined.

Furthermore the present natural landscape is to a large extent and on a global scale colonized and domesticated by means of a worldwide spread of images in the form of works of art and all kinds of media images of landscapes in film, television, tourism, etc.

Dara Birnbaum (1946 New York, USA) presents an emotionally loaded and highly critical insight into (American) society and more particularly into the way it is being portrayed by television. The prominent presence of ‘the woman’ as emotional being allows for a feminist interpretation of her work. Yet, unlike other contemporaries Birnbaum does not run diametrically counter to a male society affected by testosterone. Her work is a sustained search for a redefinition of what it can mean to be ‘a woman’ in a world evolving ever faster and overloaded with images.

Dara Birnbaum considers it a challenge to formulate a strong and well-founded commentary on a political as well as a social level, by means of new audiovisual techniques. Although she grew up in a climate of political crisis, she has still maintained her unfathomable sense for romanticism.

Parts of her personal archive will be opened up and films which were never shown before will be presented. At the same time a retrospective monograph will be compiled in which a choice selection of national and international authors will throw light on their view on Birnbaum’s oeuvre from various perspectives. The exhibition begins in the S.M.A.K. and will afterwards travel to Fundaçao Serralves (Porto, Portugal) amongst others.

In his latest work, Satoru Eguchi (°1973, Japan, lives and works in New York) breaks down the existing truth surrounding him and recreates some of its fragments in a ‘man-made’ world.
He researches the process that is involved and strives to develop imagery, based on the friction between reality and non-reality. He mainly works with simple materials like paper and cardboard to reinterpret spaces and every-day objects from his environment and he creates them into completely handmade three-dimensional sculptures. A process-like method; drawing and painting are part of each sculpture and sometimes there are elements of performance involved, when the audience participates in creating the work or are witnesses in the process.

In 2007 he re-created “Making a Home” for the New York Japan Society show; an actual life-size model of his studio, completely constructed from paper and wood. In the sculpture, he included countless minute details like drawing material, plants and snarls of cables. The sculpture represented a kind of self-portrait, exclusively constructed from objects that make up his studio. Thus he stressed the relationship between his work as an artist and his personal daily life; how banal objects may become exceptional and how they become a source of inspiration.

Satoru Eguchi will continue his artistic research in the S.M.A.K. His stay in Ghent will result in a new local installation in the Kunst Nu-space. It will be his first solo show in Belgium, but in the spring of 2008, he was a guest in our country for a residence in Lokaal01 in Antwerp. For a month, he worked intensively on a mirror-version of the office space and the kitchenette of the studio where he was staying. He investigated how the reproduction of reality may be personalised, with the aim to blur the boundary between private and public. All the details and objects are recreated to scale with nothing but paper, masonite, pencils, paint brushes and glue. He applied words on objects like a plastic bag, a tobacco pouch and a book cover in mirror writing. He also played with the physical experience of a mirror-image space by lowering the ceiling to just below his own height, which made it seem to the public as a more intimate experience of the space on the one hand and on the other an experience that was just a little uncomfortable, which intensified the fictitious content. The work was only open to the public for two days and was irrevocably destroyed afterwards. This is the reason why we wanted to offer this artist a broader platform.