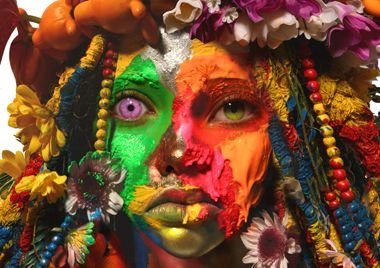 White Cube Hoxton Square is pleased to present an exhibition of new work by Ashley Bickerton, his third at the gallery.

A leading figure of the 'Neo-Geo' movement in New York in the early 1980s, Bickerton moved to the Indonesian island of Bali in 1993 and the influence of this location is manifest in much of his recent work. The cast of grotesque and exotic characters that populate Bickerton's work make oblique reference to consumerism's influence on the world's spiritual and ecological condition: from hedonistic expatriates and voluptuous indigenous women to grimacing, anthropomorphic serpents inhabiting an increasingly contaminated environment. The recurrent figure of the blue-skinned '20th century man', in Bickerton's words, 'appears as a refugee from the literature and art of the 20th century, the lone figure of the Caucasian existential anti-hero, now unwittingly lost and adrift in a drastically different and global 21st century. He wears his 'Picasso shirt' and exhibitionistically trumpets his roots, a tangle ranging from anything Hemingway to the overarching stylistics of Fassbinder's Querelle. He is blue for the ocean and his hair is braided into a desert isle.' In these paintings, he features both as relaxed family man, motoring contentedly along the coast with brood and accoutrements on-board, and as a manic, drug-fuelled sex tourist at night. The intense colours of the paintings echo the exotic palette of Paul Gauguin, with whom Bickerton has an affinity, while the gaudy, thick frames, incorporating Indonesian handicraft, make direct reference to the commodification of the art object, a continuation of Bickerton's primary discourse of the late 1980s.

Bickerton describes his artistic comfort zone as 'at the edge of credulity', where his subjects' appeal hovers 'between desire and repulsion'. Painting directly on the skin of models of whom he takes multiple digital photographs, Bickerton manipulates, twists and reassembles composite parts to create warped and seemingly impossible caricatured portrayals. In the three portraits, 'Kid', 'Rambutan Eyes' and 'Smiling Woman', the classical frontal pose of the sitters is skewed by misaligned and enlarged features, peeking from an abundance of garlands, beads and fruit. In 'Bed', women and children repose on a tawdry mattress strewn with cash and gold, watched over by carved Hindu figures set in the surrounding frame. 'The thing about the frames', says Bickerton, 'is that it is really not about the content. Some people are reviled by the use of tourist bric-a-brac and other schmaltz in their construction. The fact is it is what I have always done. Whereas in the past I bought handles, levels and aluminium brackets on Canal Street in New York City, this is the stuff they sell on my Canal Street here in Bali. It makes the same, general point'.

The artist's dystopian view of 'the end of human time' is expanded further in the sculptures. 'Flower Pot' features a giant Indonesian stone pot holding an array of exotic plant-life; closer inspection reveals a quagmire, filled with plastic cartons, bottles and other remnants of conspicuous consumption, as green-skinned creatures at the base of the flowers emerge ominously from the swamp. A 10-foot-long pearlescent white hammerhead shark hangs adorned with a white net bodysuit, buoyed up - or weighed down - by coconuts and blood red liquid in translucent bags, its predatory power rendered absurd and impotent.

Ashley Bickerton was born in the West Indies in 1959, and lives and works in Bali, Indonesia. He studied at the California Institute of the Arts, graduating in 1982, and continued his education in the Whitney Museum Independent Studies Program in New York. He has exhibited extensively internationally, including the Museum of Modern Art, New York; The Guggenheim Museum, New York; The Whitney Museum of American Art, New York; Tate, London and the Stedelijk Museum, Amsterdam.

A fully illustrated catalogue, with an interview by Harland Miller and text by Nick Stillman, will be published by Other Criteria to coincide with the exhibition.