Beatriz Milhazes. Intricately layered with a profusion of ornamental motifs, her vibrant and hypnotic paintings refer to sources as diverse as the Colonial baroque, high modernism, and popular Brazilian art. For her exhibition the artist presents a focused selection of large format acrylic paintings, chosen from her work of the past decade, as well as a monumental collage. For the last three years, American photographer William Eggleston has photographed the city of Paris throughout different seasons. This exhibition brings together his distinctive pictures and his recent paintings. 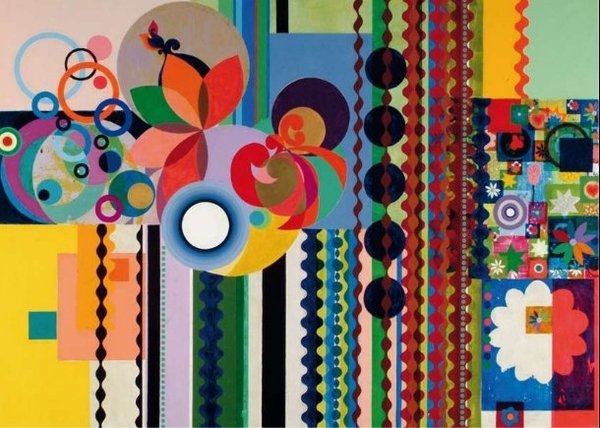 The Fondation Cartier pour l’art contemporain is pleased to present an exhibition of the work of Beatriz Milhazes, one of the most celebrated Brazilian visual artists today. Offering an overview of her work of the past decade, the exhibition will include a selection of large-format acrylic paintings as well as a remarkable new collage that she has created specifically for the show. The Fondation Cartier has also commissioned the artist to produce a special architectural installation for the exhibition. Using a technique closely related to collage, she will apply motifs made of translucent adhesive vinyl directly onto the glass walls of the Fondation Cartier, creating an effect that is evocative of stained-glass. Reflecting her interest both in natural forms and rigorous geometry, this striking installation will enter into a powerful visual dialogue with the architecture of Jean Nouvel and the surrounding garden.

Brazilian Heritage
The work of Beatriz Milhazes occupies a unique position between Latin American and Western traditions. It is thus not surprising that she showed an early interest in the work of Brazilian writer and poet, Oswald de Andrade (1890–1954) and that of his wellknown companion, the painter Tarsila do Amaral (1886–1973). Andrade’s Manifesto Antropofago (1928) called upon Brazilian artists to develop their own unique culture by “devouring” European styles and melding them with elements derived from local culture. Tarsila do Amaral’s painting expressed this philosophy, combining the bright colors and tropical imagery of Brazil with the surrealism she discovered in Europe. Inspired by her predecessors, Beatriz Milhazes embraces a dizzying kaleidoscope of influences, following an approach that she describes as “culture eating culture.” Her canvases have an undeniably Brazilian flavor, filled with an abundance of brightly colored, highly decorative motifs. Much of the artist’s inspiration comes from the high and low art present in her native country, including sources as varied as ceramics, lacework, jewelry design, carnival decoration, and Colonial baroque architecture. The delicate arabesques of tropical flowers and leaves have also found their way into her painting, revealing the artist’s fascination for luxurious vegetation. Other references for these works, which revisit the traditional genres of landscape and still-life, range from the contemplative works of Albert Eckhout—a 17th century Dutch painter who recorded the plants and animals of Brazil—to the modernist landscape designs of Roberto Burle Marx, known for his design of Copacabana beach promenade in 1970.

European Modernism
The paintings of Beatriz Milhazes express many of the formal preoccupations inherent in the history of abstract painting, from the vibrant color of Matisse to the rigorous structural composition of Mondrian. The underlying square fields of color that serve as the background for many of her works and the overlaying motifs, call to mind the work of early modernist abstract artists such as Kupka, Klee, and Léger. The artist has stated: “I am seeking geometrical structures, but with freedom of form and imagery taken from different worlds.1” Classical music, particularly the opera, as well as popular music such as bossa nova or tropicalia, motivate the “choreographed spontaneity” of the artist’s compositions. Stripes, rays, lines followed the more austere conceptualist and circular forms evoke a synchronized rhythm while the dynamics of color articulate harmony and dissonance. This clearly relates Milhazes compositions to those of other 20th century masters who have explored the relationship between music and art, such as Kandinsky and Delaunay. The use of intensely vibrant colors, such as fuchsia, gold or orange, endows her canvases with an explosive energy that many have compared to the breathtaking rhythm of fireworks.

Artistic Technique
To create this elaborate network of forms, Milhazes has developed a technique that is closely related to monotype and collage. The artist first paints the motifs and drawings of her work on translucent plastic sheets. She then applies them to the canvas and peels the plastic off, superimposing images and colors in a variety of combinations. During the transfer process, part of the motif sometimes tears, leaving portions of itself behind. These accidents create interesting surfaces marred by subtle imperfections. The slow and laborious process leads to rich palimpsests of overlaid images, some fully present, some masked, some only ghostly silhouettes.

During the past several years, the artistic production of Beatriz Milhazes has continued to expand, recently branching out into arenas such as, theatre sets, site-specific installations, and design work, including fabric and tapestry. She has also created two artist’s books, one in conjunction with the MoMA and one with the Thomas Dane Gallery, London, which explore the realms of printmaking and collage. Through her diversity of practice and multiplicity of sources, Beatriz Milhazes erases all distinctions between the high and the low, the national and the international, the classical and the contemporary, leaving her free to explore the entire realm of visual expression.

Beatriz Milhazes Born in Rio de Janeiro in 1960, Beatriz Milhazes entered Rio’s renowned Escola de Artes Visuais do Parque Lage in the early 1980s. She emerged on the Brazilian art scene in the midst of what was known as “the return to painting” of the Geraçao Oitenta (the 1980s Generation), which followed the more austere conceptualist art that dominated the country in the 1970s.

For the last three years, American photographer William Eggleston has photographed the city of Paris as part of a commission for the Fondation Cartier pour l’art contemporain. Taken throughout different seasons, these new images by one of the fathers of color photography portray the local and the cosmopolitan, the glamorous and the gritty, the everyday and the extraordinary. This exhibition also provides an exceptional occasion to bring together William Eggleston’s distinctive pictures and his recent paintings, an unknown aspect of his work that has never before been presented to the public. The Paris series of photographs forms the Fondation Cartier’s third commission to William Eggleston, following the Deserts (2000) and the Kyoto (2001) series. After his very first retrospective in 2001, this exhibition marks his second solo show at the Fondation, reflecting its commitment to artists over time.

Nomadic Nights On the occasion of the exhibitions William Eggleston and Beatriz Milhazes, Nomadic the Nights are putting on a special program of performances and concerts.