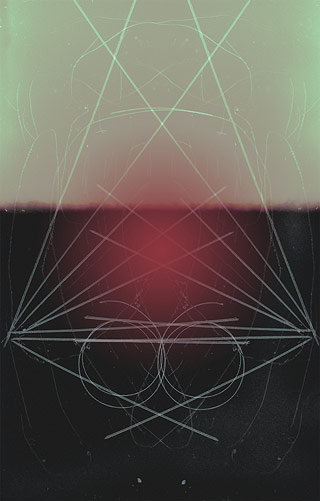 The title of the show derives from a science fiction film directed by Paul W. Anderson. Event Horizon is also an astrophysical term describing an interface within a black hole from which information cannot escape.
What visions of the future in films and artistic practice have in common is that they create a new space which does not itself show its whole validity at once but is settled in a sphere yet to be defined. The "new and undefined" holds the potential for hopes and dreams - a manifestation of all the answers that cannot be given at the time being. The works exhibited at Event Horizon bear ironic, poetic qualites and are subtle investigations of the question: What will the future bring?

The show involves seven emerging Swiss artists. Coming from and living in different areas of the country, they work in a constant cultural and intellectual dialogue. Although they have different backgrounds and conceptual approaches, there is a strong link between their practices. The artists form a new intellectual collective, creating a unique language and meaning.

Apart from the works exhibited at Raster gallery the artists will be performing and showing films at the villa rented by Raster Gallery especially for that purpose.

VALENTIN CARRON (*1977) uses formal tropes and material displacement to question art's utility and its place in the public sphere. He creates works with stark graphics and a succinctly intellectual approach. Often the motives are taken from his hometown Martigny - e.g. Christian crosses, mountains or wooden beams or they refer in a humorous manner to Swiss culture and art history, like his sculpture of a golf-playing Giacometti-figure.

ANNE-LISE COSTE's (*1973) main medium is drawing. From A4-sized papers to walls (like in a graffito or mural painting) she uses different porters for her witty and poetic cribbles. In her works text and image melt in a calligraphic manner, they complement and comment on each other. Coste's playful questions on life bear an existential meaning and give her work a poetic depth. Often the character of her surveys is rebellious, questioning the mechanisms of power.

At the heart of DAVID HOMINAL's (*1976) work lies a dream of painting, of "Grand Peinture" even, as if it were still a heroic undertaking. Hominal vehemently inscribes himself in the art-historical canon to claim for himself a place among famous painters like Goya and Velazquez (his personal heroes). He doesn't list modern or contemporary names but rather refers to these paradigmatic figures in the history of painting. Not Hominal pays homage to his "masters", he also fights against the aspirations of heroism or typical "high culture seriousness" by bringing in what was outlawed and by relating to the notions of opposition and transgression.

The artistic method of FABIAN MARTI (*1979) is based on the use of scanner and analogue photography. The procedure to reach a picture via the detour of scanning makes traces like dust, and scratches become an important physical element too, in spite of technical precision. And this is exactly what makes Marti's photography so uncommon. His photography is about a mysterious haptic presence. His symbolism, or esoteric signs, as in "The Rise", a photograph showing a magnified golden thumb on black ground. "The System", "The Inspiration", or "The Future" (all of 2008) seem as if Marti wanted to re-edit the tarot cards of Alistair Crowley.

TOBIAS MADISON (*1985) works with various media, which always encircle the idea and the concept of the image as an existing cultural value as well as its contemporary function. One of his essays about methods and strategies of cultural production was called "Production as a Spectacle". He mixes contemporary strategies of production coming from a design discourse with more nostalgic ones (e.g. theft). All his personal craftsmanship is digital, the final work is just a product, a copy of the digital idea. Tobias Madison is the founder of the exhibition space New Jerseyy (with Daniel Baumann, Emanuel Rossetti and Dan Solbach), The Ettore Sottsass Museum (with Martin Jaeggi and Emanuel Rossetti) and the publishing project Used Future (with Emanuel Rossetti and Dan Solbach). Sometimes he takes on the role of Tobias Radisson, a famous french Masterthief.

PAMELA ROSENKRANZ(*1979) artworks could be described as interventions effecting in shifts in the perception of space. Related
to this is a certain fascination with the inde?niteness of time, a subject that the artist often explores. Patterns, mirroring, and the interplay of presence and emptiness are the means that Rosenkranz frequently employs in her installations to visualize those concerns.
She took part in the 5th Berlin biennale, Manifesta 7 (2008) and will show a solo project at Art Basel Statements in 2009.

Karma International has been founded by Karolina Dankow and Marina Leuenberger in September 2006 in Zurich as a platform for international emerging artists never before shown in Switzerland. In autumn 2008 Karma International changed its status and since then has worked as a commercial gallery representing selected artists.
Apart from working with selected artists, Karma International realises special projects, which are an important element, as they lead to new collaborations, provide flexibility and enable a spontaneous way of reacting towards new tendencies in art. We also understand it as a cultural responsibility to provide a scene for young artists who play an important role in the art world but have not had a chance to show in Switzerland. In that sense we also invite guest curators, hold lectures and organise performances in collaboration with institutions such as Migros Museum für Gegenwartskunst Zürich or Kunsthalle Zurich and international galleries.
Our programme is characterized by artists with a conceptual approach as well as unique aesthetical strategies. There is an emphasis on installation and sculpture. However, the diversity in media is inherent to our practice.
http://www.karmainternational.org

Tickets for the evening events at Willa Żoliborz sold at Raster or at the Willa before concerts. Limited number of tickets.
Price: 10 PLN.