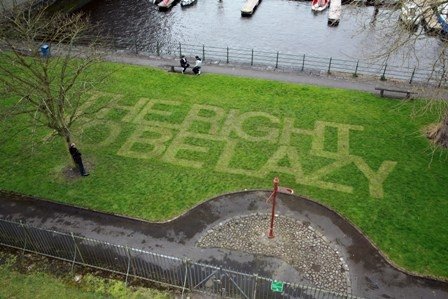 OPEN e v + a 2009, Ireland's pre-eminent annual exhibition of contemporary art, now in its 33rd year, opens to the public on March 14th. Selected by Angelika Nollert and Yilmaz Dziewior the exhibition will present the work of 36 artists drawn from 14 countries of Continental Europe, Asia and the Americas. A variety of art-formal and alternative sites throughout Limerick's city – centre chosen by the curators include the Limerick City Gallery of Art, Istabraq Hall at Limerick City Hall, the Hunt Museum, the former Art College among others.

2009 Curators' Statement:
This exhibition is about the multiple perception of urban space. As a theme 'Reading' in this context develops two perspectives. It refers to the reception of City as a linguistic structure, to the 'limerick' as a famous poetic structure, and most of all, the title reacts to those artists' approaches that deal with urban questions from different angles within a great variety of media: installations, photography, drawings and paintings as well as text and sound pieces and performances. They negotiate how the city can be read, identified and classified; they comment on how place is generated, transformed and developed within political, economic, cultural and social aspects. How is identity shaped through the place one lives in? How can a city be characterized through architecture, sound, found material and the surfaces of traces?
The exhibition negotiates the validity of a portrait of a city and its inhabitants

The broad selection of 36 artists from 15 countries, deal with these topics showing both the urgency of the issues and their individual approach to them. A lot of new and extensive projects are especially developed for "OPEN e v+ a 2009 / Reading the City."

The different venues and their specific history can be read as signifiers of different aspects of Limerick's past and present: the historical buildings of the Limerick City Gallery of Art as the former City Library and Museum, the Hunt Museum as the former Custom House, as well as the modernist architecture of the old Limerick School of Art and Design on George's Quay and the postmodern City Hall. They indicate the central social tasks of cultural accumulation, education, learning and administration.