A Duck for Mr. Darwin is a group exhibition of contemporary artists exploring evolutionary thinking and the Theory of Natural Selection. The show focuses on the legacy of Darwin's ideas and is informed by the spirit of experimentation which was so distinctive to the time in which he lived. Sarah Sze's expansive sculptural vocabulary uses these items constructively to precisely build structures that defamiliarise our preconceived ideas of these objects, lending them a new found use and vitality. On display also a new collaborative project by Slovenian born and New York based artist Tobias Putrih and American architect and design company MOS. 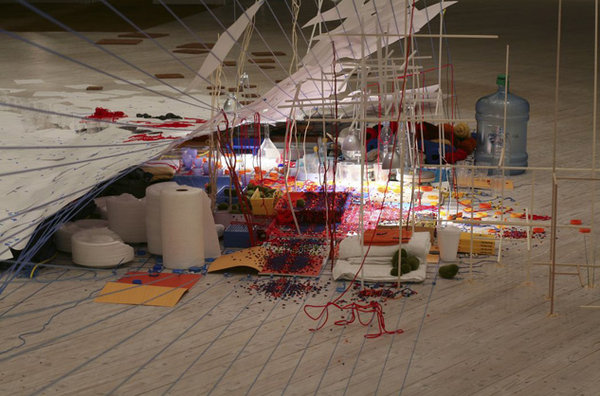 A Duck for Mr. Darwin

A Duck for Mr. Darwin is a group exhibition of contemporary artists exploring evolutionary thinking and the Theory of Natural Selection. The exhibition focuses on the legacy of Charles Darwin’s ideas and is informed by the spirit of experimentation which was so distinctive to the time in which he lived.

A Duck for Mr. Darwin presents individual artworks which mix fact and fiction, experimentation and observation, methods of display and several artists’ own research of and journeys to the Galapagos Islands. Located within Level 3 gallery, the exhibition presents work by nine contemporary artists including a number of new commissions.

Journey with the Blue Footed Booby around the Galapagos Islands in a new film by Marcus Coates, see earthworms in Tania Kovats’s new piece entitled Worm, a glass fronted display of a working wormery, which will change over the course of the exhibition and explore Mark Dion’s re-presentation of collected equipment, artefacts and trappings of the Tropical Collectors.

The exhibition title references the story of an exchange of letters between the young naturalist Alfred Russel Wallace and Charles Darwin. In 1857 Wallace was to send Darwin a specimen - a domestic duck from the island of Lombok. Just a year later he would send a short twenty page essay on species variation. This correspondence proved to be an important catalyst precipitating the publishing of Darwin’s monumental theory – the Origin of Species in 1859.

BALTIC presents American Artist, Sarah Sze’s largest UK solo exhibition to date. Tilting Planet is a cluster of sculptural installations each cobbled together out of common disposable items such as water bottles, drawing pins, paper, salt, string, lamps, matchsticks and wire. Sze’s expansive sculptural vocabulary uses these items constructively to precisely build structures that defamiliarise our preconceived ideas of these objects, lending them a new found use and vitality. These cumulative sculptures mould themselves into spaces – spreading ivy-like throughout the gallery.

Sze’s architecturally inspired works are extremely delicate and tower precariously in gravity-defying structures. These spectacular and tactile constructions can be large, complex, and beguiling in scale and composition. Operating almost as an independent ecosystem, the sculptures that comprise Tilting Planet will become a singular topographical terrain, a unique landscape emerging from components of the everyday.

Sze’s work was last seen in the UK at the Liverpool Biennial (2008) and Victoria Miro Gallery, London (2007). In 2004 she participated in the group show State of Play at the Serpentine Gallery and had a solo exhibition at the ICA, London in 1998. This exhibition in the Level 4 gallery in BALTIC will beher largest exhibition in the UK to date.

BALTIC presents a new collaborative project by Slovenian born and New York based artist Tobias Putrih and American architect and design company MOS. For this installation Putrih has used Styrofoam blocks and stack structures according to the basic rules of equilibrium and ‘maximum overhang stacking’ to produce a lightweight structure that appears on the verge of collapse.

Putrih’s work exists between science, sculpture and architecture, his projects informed by improvisation and often by collaboration with others. The artist choosing to use temporary materials such as cardboard, Styrofoam and packing tape in seemingly improvised way, though the results are highly ordered and systematic. His striking and thoughtful constructions may be thought as models or design concepts where the potential of an idea is explored, but this can extend to making proposals for objects or entire architectural spaces, sometimes that will never be built.

Embedded in his work are ideas that undermine and question the fixity of things we know. One recurring theme is the history of modernist utopian architecture.

Born in Slovenia but now living in New York there is much in his practice that looks at the exchange between Eastern Europe and its ideas of modernism and his understanding of such structures and their reception in the West. This exhibition is presented at a time when a well-known modernist edifice in the centre of Gateshead is in the process of being dismantled, piece by piece. Responding to the proportions and scale of Level 2 gallery, this project has more than a degree of resonance with some of the 60s and 70s architecture that can be seen across the city’s skyline.

This is Tobias’s first solo exhibition in a public gallery in the UK.