''Dream in a Contemporary Secret Garden'': 12 contemporary Asian artists from Taiwan, Korea, Japan, and New York use various media to express spiritual refreshment. ''Eternal Recurrence'' brings together the art of Lucero Gonzalez Jameson and Claudia Doring Baez, 2 artists from different generations whose works poetically vacillate from the present to the past. 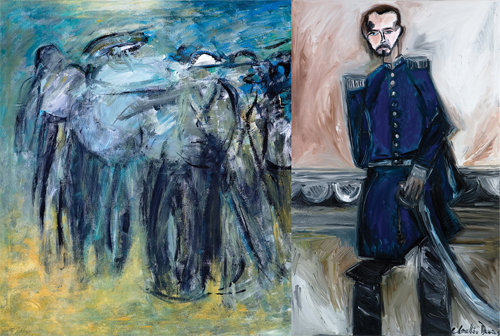 The Chelsea Art Museum – Home of the Miotte Foundation – is pleased to present Dream in a Contemporary Secret Garden. The Garden is a common subject in art - both ancient and contemporary, Eastern and Western. New York is a landscape that lies beyond nature, a city of secrets. To uncover its multicultural art is to discover the secret gardens of the city, and find the city’s heart.

Treatment of gardens has evolved into a genre offering many facets of nature - plants, trees, flora and fauna - to the dreamer. Gardens change according to the season, the aspect of nature revealed, and human involvement. It is a landscape in motion, and a children’s wonderland, where fairy tales start. Gardens in Asia are more exotic and erotic than their Western counterparts, and more frequently grounded in literary contexts. Poets, scholars, and literati meet in Asian gardens, and love stories bloomr in the back garden. Of course, a secret garden in an imperial palace exhibits the most extreme instance of these characteristics, and the intersection of private and public life lends itself easily to passion, drama, and tragedy.

In this exhibition, twelve contemporary Asian artists from Taiwan, Korea, Japan, and New York use various media to express spiritual refreshment. The art relies on multiple perspectives to create a startling view of a landscape of the mind.

The works are divided into four categories: Poetic Garden, Landscape in Motion, Wonderland, and Hidden Garden.

Eternal Recurrence brings together the art of Lucero Gonzalez Jameson and Claudia Doring Baez, two artists from different generations whose works poetically vacillate from the present to the past. Both artists are related to important Mexican historical figures: one is Manuel Gonzalez (1833-1893), a President of Mexico and a liberal; and the other Miguel Miramón (1831-1867), an interim President of Mexico, a general, and a conservative; the latter was one of two persons executed with Maximilian I, Emperor of Mexico and immortalized in Edouard Manet’s The Execution of Emperor Maximilian (1868-69).

Lucero's contribution to the exhibition consists of sculptures, a video, and paintings and she introduces her works in Eternal Recurrence via her rendition of Manet’s iconic painting. Her other canvases also trope history in that they are informed by canonical artists such as Picasso and Matisse, yet her paintings are of more personal subject matter and articulated in her distinctly abstract and expressive style.

Claudia Doring Baez, on the other hand, approaches history almost as if it is fiction: her participation in Eternal Recurrence explores a postmodern spin on portraiture in which the models she depicts are based on real individuals, though the resulting works are titled vis-à-vis their professional occupation: the filmmaker, the librarian, the art dealer and so forth. Her strategy is to capture the quintessence of a maker of films, for example, so that the painting embodies a character or even an archetype rather than a specific person. She prefaces her paintings and sculptures in Eternal Recurrence with a series of portraits titled The President of Mexico, which is based on a full-length portrait of Manuel Gonzalez housed in Mexico City’s Chapultepec Castle and part of Mexico’s cultural patrimony.

Chelsea Art Museum
556 West 22nd Street - New York
open Tuesday through Saturday 11am to 6pm
Thursday 11am to 8pm
closed Sunday and Monday
8 Usd adults, 4 Usd students and seniors, free for members and visitors 16 and under