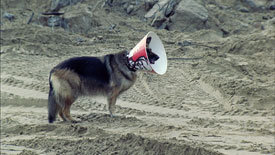 Two video projects by Allora & Calzadilla, two places separated by a great distance, and two different events that came to the attention of the media: On the 29th of August 2005, Hurricane Katrina devastated entire districts of New Orleans. Many people died in the floods. Most of the population had to flee or be evacuated. Looting took place. Today, some inhabitants have still not returned. Public housing project districts have not been repaired. Provision was intentionally made for fewer residents than before.
At the end of 2008, bulldozers demolished the last remains of the Palast der Republic in Berlin, a building central to public life in the GDR as the location of the Volkskammer and as a venue for culture. In 1950 the socialist government had blown up Berlin's old Stadtschloss, damaged during the Second World War, which formerly stood on the same site. Most of this building dated from the 17th or 18th centuries. In 2007 the Bundestag and the region of Berlin decided to reconstruct the Stadtschloss's exterior in connection with the building of the new Humboldt Forum.

Changes in the balance of political power in Berlin and the uncontrollable power of nature in New Orleans have both lead to far-reaching urban 'revisions', to symbolic politicised architecture, to the loss of a population's social identity and to a discussion that gives these events and processes massive public relevance. This is the background to the two video projects by Jennifer Allora (*1974 Philadelphia/USA) and Guillermo Calzadilla (*1971 Havana/Cuba) on display at Haus Esters: How To Appear Invisible, 2009 (Berlin), created specially for the Krefeld exhibition, and A Man Screaming Is Not a Dancing Bear, 2008 (New Orleans).
The two artists, who live in Puerto Rico, continually invoke such complex situations in their sculptures, performances, audio works and videos, drawing the observer into different social, political and historical spaces by means of fascinating, atmospheric 'images'.

Both of Allora & Calzadilla video projects express a pictorial aesthetic that unites documentary tone with a cinematic format. The images show the location after the event in the case of New Orleans and during the event in the case of Berlin. In A Man Screaming Is Not a Dancing Bear, sudden cross-cuts, rapid camera movement and images almost invariably in sharp focus create an impressive narrative. The viewer's eye ranges over three different situations, continually changing over abruptly: a river landscape with lush vegetation, the interior of an abandoned house, and a young man standing outside in front of the destroyed house's window. He beats out the rhythm of 'survival' on the slats of the blind with sticks.
In How To Appear Invisible, the bulldozers on the building site, biting ravenously into the stone remnants, look like monsters transported to central Berlin. A deserted, nondescript landscape is revealed within a major city usually known for its sex appeal. A German Shepherd dog is shown wearing a ruff with the world-famous Kentucky Fried Chicken trademark, one of America's largest formulaic chain restaurant franchises. It prowls around the demolition site, making it look as if the capitalist world, with its belief in myths, power and symbols, is seeking the remnants of a bygone utopia.

Allora & Calzadilla have matched their two video projects to the exhibition venue. Museum Haus Esters in Krefeld is itself an architectonic space bearing the marks of social, functional, societal and historic architectural changes. Designed in 1927 as a family home, it was built by one of the most renowned architects of the so-called International Style, Ludwig Mies van der Rohe. It has been used as a venue for contemporary art exhibitions since 1981. The rooms have lost their homely appearance and are now hybrids of the White Cube and a house's rooms.

A catalogue in German and English is published to accompany the exhibition, with texts by Carsten Ruhl (architecture historian), Raimar Stange (art critic) and Sylvia Martin (art historian).