Tuesday to Saturday 10am to 6pm

Works on Paper. Alice Neel's pencil, ink and gouache compositions from the 1930s - 1960s reveal a distinct practice counterpart to her paintings in the verity of their stark graphic forms and delineations. Portraits are accompanied by closely observed narrative scenes from daily urban life. 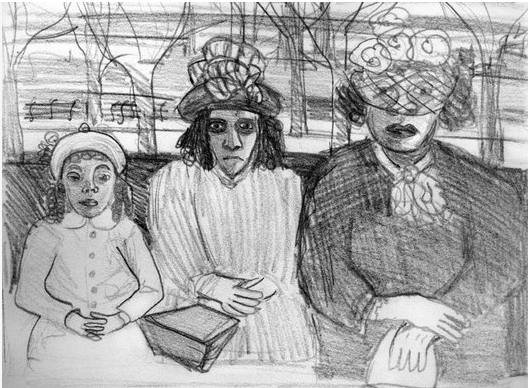 Victoria Miro is pleased to present the first exhibition of works on paper in the UK by the acclaimed figurative painter Alice Neel (1900-1984). Renowned for her portraits of friends, family, acquaintances, fellow artists and critics, Neel was among the most prolific and important American artists of her time. Throughout a career that spanned six decades, Neel chronicled the faces and scenes encountered on her journeys from Philadelphia to Cuba to New York City’s Greenwich Village, Spanish Harlem and the Upper West Side.

Neel’s pencil, ink and gouache compositions from the 1930s – 1960s reveal a distinct practice counterpart to her paintings in the verity of their stark graphic forms and delineations. Portraits are accompanied by closely observed narrative scenes from daily urban life – three women seated on a bus; a group of figures queuing to collect food; clusters of figures in the park, and a businessman meeting with clients. Offering a more immediate depiction of the scene at hand, they nonetheless betray the artist’s characteristic acute observation of her subjects. These works on paper presented an opportunity for the artist to test out different ideas, jot down scenes from memory, and work in a more portable manner. While evidencing her own stylistic tendencies, they also reveal a willingness to experiment with various forms and motifs, at times recalling the work of artists such as Honoré Daumier and Edward Munch.

The exhibition is organised in association with Jeremy Lewison Ltd

Biographical details: Alice Neel is widely collected and exhibited in America. Exhibitions include her centennial retrospective in 2000 - 2001 organised by the Philadelphia Museum of Art and shown at the Whitney Museum of American Art, New York and Walker Art Center, Minneapolis. Neel has been included in European anthologies, such as The Portrait Now (National Portrait Gallery 1993) and Masculinfeminin – le sexe de l’art (Centre Georges Pompidou 1995. There will be a major retrospective of Alice Neel beginning at Museum of Fine Arts, Houston in March 2010 and travelling to the Whitechapel Art Gallery and Moderna Museet, Malmo.