Featuring major works from five important artists - Stefan Bruggemann, Rita McBride, Corey McCorkle, Jason Rhoades and Ai Weiwei - the project explores the relationships between art, design, architecture, nature and technology. Objects, references, materials and shapes belonging to our daily environment are taken out of their utilitarian context in a carefully considered exhibition, which has heightened poignancy given the richly symbolic architectural backdrop of Lismore Castle. Curated by Philippe Pirotte. 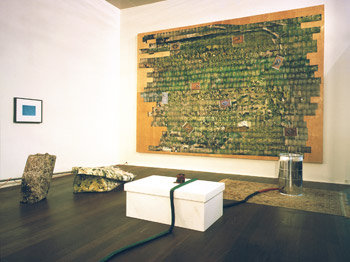 In Design and Crime, art historian and critic Hal Foster states that, at our time when aesthetics and utilitarianism are being subsumed into commercialism, everything – from architectural projects to art exhibitions, from genes to jeans – seems to be considered as design in a world driving towards cultural in-distinction. Featuring major works from five important artists - Stefan Brüggemann, Rita McBride, Corey McCorkle, Jason Rhoades and Ai Weiwei the exhibition United Technologies explores the relationships between art, design, architecture, nature and technology. Objects, references, materials and shapes belonging to our daily environment are taken out of their utilitarian context in a carefully considered exhibition, which has heightened poignancy given the richly symbolic architectural backdrop of Lismore Castle.

Rita McBride's sculptures provide an illusion of potential use, which in turn enlightens the fictional and critical power of the hi-jacked materials and forms featured in her work. Three significant works feature in the show, including Kells from her celebrated series of Templates and Wall, based on an old Irish wall, which characteristically explores, and blurs, the line between reality and fiction. Using extremely precious materials such as ancient wood or porcelain, Ai Weiwei questions the appropriation of heritage and the permanence of tradition. Oil Spills threatens to pollute the preserved territory of Lismore Castle. One Ton of Tea, a one square meter cube made of one ton of compressed black tea, is both a bitter-sweet homage to Minimal sculpture.

The concept of growth is assumed in Jason Rhoades' monumental, process-oriented installations like Perfect World. Parts of this mega-sculpture will be exhibited in United Technologies for the first time since its initial showing in Zurich in 2000, and View From Above is a fragment of the upper level of the installation featuring thousands of analog and digital photographs enlarged to an almost 1:1 format.

Corey McCorkle's work also finds an inspiring breeding ground in the gardens of Lismore Castle and the legacy of its 19th Century architect Joseph Paxton. The artist will produce Dandelion Wine after an ancient recipe, ironically celebrating the same weed that threatens to crowd out the cultivated plants that are the pride of Lismore Castle's Gardens. McCorkle has also designed seven wooden canes, which will lean against the walls of the gallery, waiting for visitors to take one out for support during their stroll in the gardens.

In Stefan Brüggemann's installation the words Conceptual Decoration are printed on silver wallpaper that covers the main gallery space in its entirety, and so becomes a background for other works. Looking and meaning are inextricably shackled together as they are unable to function without each other.

United Technologies' narration pays tribute to the history of Decorative Arts and famous theoreticians such as Adolf Loos, William Morris and Augustus Pugin (who incidentally designed the furniture for Lismore Castle). In Design and Crime again, Hal Foster quotes the Canadian designer Bruce Mau who in Life Style wrote a candid praise for a wholly designed world: "In this environment, the only way to constitute a true capital is adding a value: wrapping the product in intelligence and culture. The apparent product, the object attached to the transaction, is not the real product at all. The real product is from now on intelligence and culture". In response to that context, United Technologies will reflect upon the status, the value and the destination of the work of art as part of a network of material and immaterial economies.

Philippe Pirotte
Currently Director of the Kunsthalle Bern in Switzerland where he is designing an internationally praised program, art historian, critic and curator Philippe Pirotte has been involved in numerous collaborations with institutions such as the Middelheim Museum, Antwerp; Vanabbemuseum Eindhoven, Museo Reina Sofia, Madrid and others. In addition to his project with Limore Castle Arts, he is currently working on projects for Contemporary Image Collective, Cairo and Bozar Brussels. He teaches at the RijksAkademie in Amsterdam. His writings include texts on Ivan Grubanov, Armen Eloyan, Corey McCorkle and Luc Tuymans.