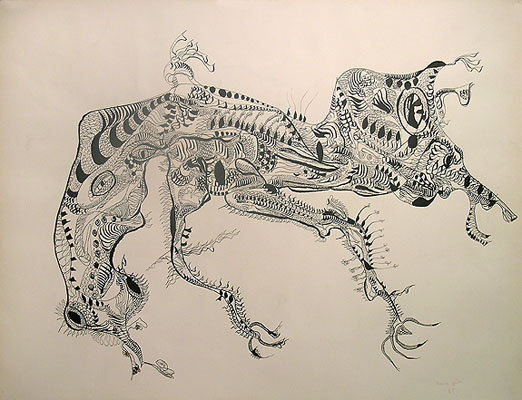 The Drawing Center is pleased to announce FAX, an exhibition that invites a multi-generational group of artists, as well as architects, designers, scientists and filmmakers, to conceive of the fax machine as a thinking and drawing tool. Participants will transmit fax-based work—some seminal examples of early telecommunications art—via the museum’s working fax line throughout the duration of the exhibition, on view in the Drawing Room from April 17 through July 23, 2009. The active accumulation of information—received in real time, in the exhibition space—will include drawings and texts, and the inevitable junk faxes and errors of transmission, creating an ongoing cumulative project concerned with reproduction, obsolescence, distribution, mediation, and generative systems. The exhibition is curated by João Ribas, curator of The Drawing Center, New York, and is accompanied Lisa Cooley Fine Art. by an illustrated catalogue co-published by iCI and The Drawing Center (available in September 2009). FAX is co-organized by The Drawing Center, New York, and Independent Curators International (iCI), New York, and circulated by iCI.

Although the technology for transmitting printed images and texts over distance dates from the nineteenth century—a machine for the purpose was patented in 1843 by Scottish mechanic Alexander Bainit was the introduction of the modern fax through commercially available machines in the 1970s that turned facsimiles into a ubiquitous communications medium for international business. Artists readily exploited its immediate, graphic, and interactive character, making it an important part of the history of telecommunications art, nestled between the legacy of mail art and the nascent practices of new media.

Faxes by close to 100 participants sent to the initial showing of FAX at The Drawing Center will form the core of this generative and accumulative exhibition; and subsequent institutions will each invite up to twenty additional artists to submit works to be presented at successive venues as a touring exhibition in collaboration with iCI.

FAX will travel to the Contemporary Museum, Baltimore, MD in the Fall of 2009 and will continue to tour through August 2012.

From April 17 through July 23, 2009, The Drawing Center will present Unica Zürn: Dark Spring, the first major museum exhibition in North America devoted to the work of the German artist and author, Unica Zürn (1916–1970). The exhibition will foreground the role of drawing in Zürn’s artistic career and will bring together for the first time 50 ink and watercolor works on paper spanning from the early 1950s until her death in 1970, as well as related texts, photographs, and personal correspondence. Unica Zürn: Dark Spring is curated by João Ribas.

Already an established author in postwar Berlin, Zürn was introduced in the early 1950s to the practice of automatic drawing, and to the Paris Surrealists with whom she would collaborate and exhibit, by her partner, Hans Bellmer. Though largely unrecognized contributions to late Surrealism, the resulting drawings and texts, the majority of which were produced during an intensely productive two decades also marked by a series of mental crises, are imbued with the movement’s fascination with the poetic force of madness and Zürn’s own vivid experience of illness. At once playful and haunting, Zürn’s body of work in drawing evinces one of the most febrile imaginations of the past century, tragically cut short by her suicide in 1970.

ABOUT THE ARTIST
Unica Zürn was born in Berlin-Grünewald in 1916, and lived and worked in Berlin and Paris. From the mid-1930s, Zürn first worked as an archivist, editor, and artistic advisor at the Berlin-based German national film production company, UFA, before devoting herself to writing. Zürn produced numerous expressionistic short stories that were published in German newspapers throughout the 1950s before moving to Paris with German Surrealist artist, Hans Bellmer. During the following decade and a half, Zürn produced paintings and drawings while living in Paris, becoming acquainted and exhibiting with many artists in the Surrealist circle, including André Breton, Max Ernst, Man Ray, and Marcel Duchamp. From 1953 to 1964, Zürn composed nearly 124 anagram poems, many of which provided the central framework for her later experiments with prose, including her autobiographical novella, Dark Spring (1969), and more avant-garde texts such as Im Hinterhalt (1963) and Die Trompeten von Jericho (1968). In the early sixties, she began suffering a series of mental crises leading to intermittent hospitalization during which she continued to draw and write poetry. In October 1970, having been released from a clinic, Zürn returned to Paris and Bellmer; on the morning of October 19, Zürn leapt to her death from the balcony of the apartment the couple shared on the rue de la Plaine—as she had described in the last pages of Dark Spring.

On Wednesday, May 13 at 7:00 pm, The Drawing Center will present House of Illnesses: Unica Zürn's Art and Madness, a panel discussion addressing the relationship between art and mental illness, in particular, Zürn’s own experience of schizophrenia and her tragic suicide at the age of 54 in 1970; the etiology of her illness and her treatment by the medical establishment; and its impact and relevance, if any, to a reading of her work. The panel, moderated by João Ribas, will include Caroline Rupprecht and others to be announced.

On Wednesday, May 20 at 6:30 pm, artist, writer, and filmmaker Eleanor Antin will read from her autobiography entitled Memories of Stalin. Antin’s work has been the subject of a major restrospective at the Los Angeles County Museum of Art and is she an emeritus Professor of Visual Arts at the University of California at San Diego.

In conjunction with the exhibition, The Drawing Center will publish Drawing Papers 86: Unica Zurn: Dark Spring featuring essays by João Ribas and Mary Ann Caws. The publication will be approximately 100 pages, with 50 color images, and will sell for $20.

The Drawing Center
35 Wooster Street, New York, NY 10013
Hours
Gallery hours are Tuesday through Friday, 10 am to 6 pm and Saturday, 11 am to 6 pm (closed Sundays and Mondays).