In her solo exhibition "10 9 8 7 6 5 4 3 2 1 0", the artist shows comprehensive installations, slide projections and films that express, in an abstract way, her intensive examination of a tangible reality. A direct language and the framing of cultural, political and ethnographic values are the parameters that mutually pervade in her works. Schultz has created an installation seizing fundamental sculptural questions. 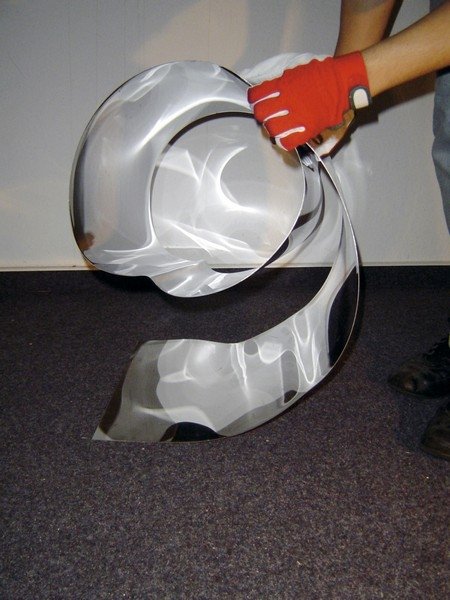 In her first institutional solo exhibition, 10 9 8 7 6 5 4 3 2 1 0, Nora Schultz (*1975) shows comprehensive installations, slide projections and films that express, in an abstract way, her intensive examination of a tangible reality. A direct language and the framing of cultural, political and ethnographic values are the parameters that mutually pervade in her works.

For the exhibition room Nora Schultz has created an installation seizing fundamental sculptural questions. The installation shows several chrome-plated pipes mounted firmly on the wall or hung on a rope. Like a mobile, they sometimes arrange themselves in a perfect balance resembling a set of scales, and sometimes they loose balance and seem to struggle for their position. Nora Schultz' sculptures countermand the well-balanced weight ratio of the contrapposto in classical sculpture. Her works offer no well-balanced relation between calmness and motion, tension and relaxation, or bondage and liberty of the body. The ratio of carrier and (self) weight incurs imbalance. Schultz' minimal sculptures consist of industrial materials, found objects, building materials and ship's ropes. Their texture suggests an association to the unfinished, to building and travelling. The authority of an “it has been so“ is dissipated by the doubling and reproduction of images and situations while offering at the same time another “authenticity“ arising from the animation of the shown objects.

Two slide projections in the rear part of the room complement the fragile sculptures. The first series of slides records three-dimensional objects via two-dimensional photographies taken from different angles. The image sequence is consequently dynamised and put into motion. Another slide projection welcomes the visitor in the last room, showing found and personal pictures of travels. The abstract indications of an (im)balance of masses and values are translated into far-reaching cultural and political images. Schultz establishes associative references to the French author and ethnologist Michel Leiris who, in his travel journeys and essays, offers an unsparing self analysis and an open, immediate impression of his experiences with foreign cultures. In his diary, L´Afrique Fantôme, Leiris describes African rituals of tribal civilizations that reflect not only their own history. The rituals comment and parody European civilizations and show that there never is just one ruling point of view onto a subject, but that this point of view entirely is thrown back.

Along with these new works, Nora Schultz shows further works corresponding with regards to content. Her arrow sculpture (2007) can be read as a typographic two-dimensional emblem operating as cross-reference and, at the same time, as a real object and visualisation of an arrow projectile. Similar to the set of scales, the status of the x-tables (2007) hovers between literal figure and object and shows an instability and reversal of the carrier⁄weight ratio. A slide projection in the basement raises the issue of the well known case of a failed balancing act: the story of Fidgety Philip from Heinrich Hoffmann's Slovenly Peter (Struwwelpeter ), a classical German children's story. In 1845, at the time of the German national revolution, Hoffmann, a doctor and director of the asylum in Frankfurt (Anstalt für Irre und Epileptische), wrote the story of a little boy who is unable to sit still at the table. The rebellious child defies all rules and educational methods of its parents and accomplishes acrobatic exercises on the chair. His attempt to balance on two chair legs fails and comes to a bad end. In the slide projection the table becomes the main player. The controversially discussed children's book has been translated into over 30 different languages; the illustrations show the diverse interpretations of this story given by different cultures all over the world.

Nora Schultz studied at the Städelschule in Frankfurt am Main, at the Willem de Kooning Akademie, Rotterdam, and at Bard College, New York. She took part in group exhibitions at the Kunstverein Braunschweig (2005), at the Zentrum Paul Klee Bern (2006), and at the Museum Kurhaus Kleve (2008). Most recently, her solo exhibitions were shown at the kjubh (2007), in the Dépendance, Brussels, and at Reena Spaulings Fine Art, New York (2008). This year her works will be shown in a solo exhibition in the Open Space at Isabella Bortolozzi, Berlin, and at Art Statements during the Art Basel at Sutton Lane, London⁄Paris. The Kölnischer Kunstverein presents her first institutional solo exhibition. In summer 2009 the artist will exhibit works together with Pernille Kapper Williams at the Grazer Kunstverein.

An accompanying publication will be released.