Continuity brings together a group of artists from different generations who grappled and continue to grapple with the features of modernity identified by Clement Greenberg in his essay Modernist Painting, written in 1961. Downstairs, a two person exhibition with works by Miranda Whall and Flora Whiteley. 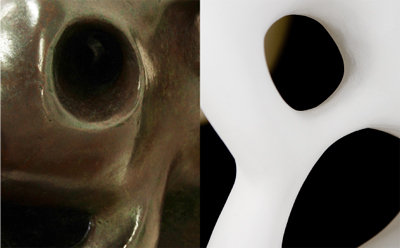 In his essay Modernist Painting, written in 1961, Clement Greenberg set out a defence of modern art based on the notion of historical continuity. This exhibition brings together a group of artists from different generations who grappled and continue to grapple with the features of modernity identified by Greenberg. Greenberg wrote: "Modernist art develops out of the past without gap or break, and wherever it ends up it will never stop being intelligible in terms of the continuity of art". This exhibition seeks to make links between contemporary art practice and that of earlier 20th century modernists in order to demonstrate that artistic concerns with shape, balance, scale and colour remain current. Similarities in colour and painterly texture may be found between the white paintings of Sam Francis and Sandra Blow, made in 1955 and 1961 respectively. At the same time, the intersection of horizontal and vertical planes in the recent work of Arabella Hope could be regarded as a contemporary echo of Blow's composition.

The sculptural works of Steven Gontarski, Barbara Hepworth, Des Hughes and Henry Moore included in this exhibition each address the notion of spatial completeness. In 1937 Moore observed that "A hole can itself have as much shape-meaning as a solid mass" and through their engagement with the interplay between mass and void, balance and scale, these artists demonstrate how qualities of the sculpted form continue to be of fundamental importance. For Greenberg, recognising art's historical lineage was important because he suggested that it is through art's engagement, response and divergence with the past that it is able to sustain itself into the future. Throughout his career Albert Irvin has consistently cited JMW Turner as a major influence; Hannah Maybank's textured monochrome works recall the organic underpinnings of Ben Nicholson's sculptural reliefs; while Lucy Stein's gestural oil canvases demonstrate how a contemporary female painter can productively respond to Expressionism. While post-modernism expanded the field of art practice, theory and subject matter, and Greenberg's writings have been widely critiqued and problematised, as this exhibition demonstrates, the questions of continuity and departure remain relevant.

Miranda Whall's work probes taboos and expectations surrounding female identity and expression within social, political, cultural, animal and natural environments by creating humorous and unlikely scenarios between herself and other things. Most well known for her watercolour animations and paintings combining giant garden birds perched on the knees and heads of masturbating self portraits, her new video triptych takes its starting point from Gustave Courbet's painting L'Origine du monde, 1866. While Courbet's semi-pornographic depiction of female genitalia portrays a mute, passive and disembodied fragment of a woman, presented for voyeuristic titillation, Whall's video work is active, vocal and literally full of life. Whall has digitally transplanted the genitals of Courbet's model onto her own body in its 29th week of pregnancy. Literally lying behind the fragment of Courbet's painting, Whall presents herself as both sexually demonstrative and obviously procreative. While she recites a list of gynaecological symptoms experienced during pregnancy and describes explicit sexual needs, her round belly moves with her breath and unborn life.

Miranda Whall received her MA in Fine Art from the Royal Academy Schools in 1996. She has exhibited widely including the solo exhibition Twirly Whirly at Glasgow International, 2006 and recent group shows The Future Can Wait, Schuster Gallery, Berlin, 2009; The Animal Gaze, Plymouth Arts Centre, 2009; Future50, LS1 Project Space, Leeds, 2008; The Golden Record, The Collective Gallery, Edinburgh, 2008; and You Shall Know Your Velocity, Baltic, Gateshead, 2006.

Seen collectively Flora Whiteley's paintings construct uncertain and inconclusive narratives. Although her scenes are familiar- a girl smiling and waving, a group of people dancing, a tired face resting on a desk top- they nonetheless remain strange and unfathomable. Whiteley's use of unnaturalistic colour, including acid green and bright pink, suggests that these paintings are heightened fragments, the product of a sharp but also hazy memory. Exploring the melodrama of everyday life, Whiteley sources her compositional elements from found images, in magazines, photographs, and newspapers. However, although these scenes might have originated from the real world, Whiteley's painterly treatment embellishes and distances them from it. Exploring the difficulty of communication and the construction of narrative in visual formats, her paintings explore the fluidity and ambiguity of time and place.

Flora Whiteley received her MA in Fine Art from Chelsea College of Art and Design in 2008. She has exhibited in numerous exhibitions including Day after day after day, The Star and Shadow, Newcastle upon Tyne, 2009; Harry Smith Anthology Remixed, Sensoria Festival, Sheffield, touring to The Centre for Contemporary Arts, Glasgow, 2008; and Better Place Portraiture, collaborative performance with Darren Banks, at mima, Middlesbrough, 2006. Her solo show Through dark glasses was held at Vane, Newcastle upon Tyne in 2008. She was recently awarded an Arts Council England Research and Development grant.