The exhibition takes as the point of departure the life and work of seminal artist Kurt Schwitters, who spent many years in the area of More and Romsdal in Norway during his exile from Germany in the 1930s. The project delves into this particular moment in the local history as the selected artists investigate the geopolitical conditions Schwitters had to navigate during these years. Curated by Lina Dzuverovic. 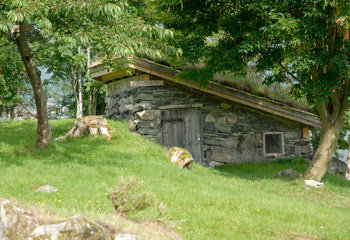 27 Senses takes as the point of departure the life and work of seminal artist Kurt Schwitters (1887 – 1948), who spent many years in the area of Møre and Romsdal in Norway during his exile from Germany in the 1930s. Much of his time was spent on the island of Hjertøya near Molde where he lived and worked in a summer hut, now named Schwitters' Hütte (pictured).

27 Senses is the first contemporary art exhibition to solely engage with the time Schwitters spent in Norway. The project delves into this particular moment in the local history as the selected artists investigate the geopolitical conditions Schwitters had to navigate during these years.  27 Senses investigates how certain ideas central to Schwitters' oeuvre are manifesting themselves today across the visual arts, performance and sound based practices. Schwitters' eclectic practice spanned across painting, immersive installation, performance, sound poetry, typography, collage and sculpture and has had a crucial, but often overlooked, influence on contemporary artistic and performative practices. The participating artists are all involved in a dialogue with the playful eclecticism and explorative spirit so closely associated with Schwitters.

Artist/ poet Kenneth Goldsmith, the founding editor of UbuWeb presents a selection from his web-based archive of avant-garde material as well as an associated wall collage of found material collected over the years. Swedish artist Karl Holmqvist creates an ambitious remake of German artist Charlotte Posenenske's Revolving Vanes Series E complemented by a site-specific sculptural duo. Further participating artists include composer and artist Carl Michael von Hausswolff who presents The Fire, a film about Selmer Nilsen, a former spy who not unlike Schwitters found himself exiled in northern Norway. The influential New York-based artist and theoretician Jutta Koether brings together two essential strands of Schwitters' practice in a series of paintings combining his landscape renditions and assemblage practices. Koether's resulting suite is installed in a glass structure modelled upon the Schwitters Hütte. Norwegian artist Eline McGeorge presents a series of works comprising sculpture, animation,photography, collages and drawings.

The first stage of the project took place in the summer of 2007 in the form of a visit to the region by the selected artists. This research trip served as an initial on-site exploration of the presence of Schwitters in the area, and as a basis for the creation of site-specific works. With this context-sensitive orientation in mind, the exhibition begins with a day of performances around the Schwitters' Hütte located on the island of Hjertøya, not usually open to the public. The hut is covered in Schwitters' collages, small handwritten notes on the walls and the beginning of a Merzbau-like structure along one of the walls.

The title, 27 Senses comes from the opening line of Schwitters' Merz love poem An Anna Blume. In it Schwitters alludes to the five senses not being enough to describe the object of his desire. This notion of synesthetic experience carries through all of Schwitters' works and is manifested in his wish for Merz 'to create connections, preferably between everything in this world'. In his quest for an experience not unlike a Wagnerian Gesamtkunswerk, Schwitters longed for all of his works to be perceived as one lifelike experience. It is precisely such an experience that 27 Senses seeks to create through combining the exploration of the local area with the works in the museum.

About Kunstmuseet KUBE:  Since its foundation in 2005, Kunstmuseet KUBE has involved artists working across the visual arts, performance and applied arts. Located in Ålesund, Norway the museum has a close relationship with its surrounding community yet has, via ambitious contemporary art exhibitions, also gained a more international orientation.

For further information about the exhibition and details of travel to Alesund and accommodation please email: electra@electra-productions.com