Wow That's Mean and Other Vegan Cuisine. The artist has created a body of work that has evolved into the sprawling, mythic tale of the Mounds, a gentle, human-plant hybrid, and the Vegans, an evil, tofu-worshipping mutant species of ape man who want to destroy all Mounds. Each of Hancock's uniquely crafted exhibitions is an opportunity for him to further develop a particular chapter or incident in the narrative through his paintings, drawings, prints, wallpapers and installations. 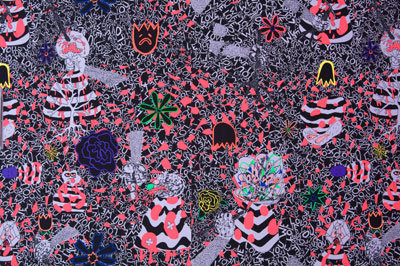 The Institute of Contemporary Art is pleased to present a site-specific installation by Trenton Doyle Hancock on view in ICA's Ramp and Project spaces April 25-August 3, 2008. Since 1997 Trenton Doyle Hancock (b. 1974, Oklahoma City, OK) has created a body of work that has evolved into the sprawling, mythic tale of the Mounds, a gentle, human-plant hybrid, and the Vegans, an evil, tofu-worshipping mutant species of ape man who want to destroy all Mounds. Each of Hancock's uniquely crafted exhibitions is an opportunity for him to further develop a particular chapter or incident in the narrative through his paintings, drawings, prints, wallpapers and installations.

This year marks the 10th anniversary of the Vegans, which Hancock first created while a graduate student at Philadelphia's Tyler School of Art. His exhibition "Wow That's Mean And Other Vegan Cuisine" at ICA will honor the occasion by exploring, in greater detail, their formation. The 90-foot Ramp will be hung with Hancock's new, custom-made glow-in-the-dark wallpaper. Visitors will be bombarded by the colorful imagery on the walls depicting "The Great Mound Massacre," the violent murder of several hundred baby mounds by their half brother and sister, ape man and woman, Brouthescam and Cromalyna. Throughout the day, the wallpaper will change appearing, in daylight hours, as more flat and subdued, but becoming significantly more vibrant and colorful, even seemingly three dimensional as night falls with only the black lights to illuminate the images.

From the Ramp, visitors will move directly into the Project Space and see work that depicts the subsequent creation of the Vegans. Hancock has arranged a composition of paintings and drawings, both new and old, along with an assemblage of objects purchased by the artist from area thrift stores and explicated by wall drawings made on site. In Hancock's narrative Brouthescam and Cromalyna, are banished to the underworld for the murders and procreate producing the Vegan race. A small group of the included works will also deal with the evolution of the Vegans as a visual element based on the artist's experiences living with staunch vegans while in graduate school.

Hancock represents one of several contemporary artists, among them Polly Apfelbaum, Kerry James Marshall, Layla Ali and Takashi Murakami, who cite comics as important source material, in terms of imagery or technique, for their work. Hancock uses the ongoing serial output, consistent with comics, as a method of production and always returns to his overarching narrative of the struggle between the Mounds and Vegans. He even includes a super-hero character (his alter ego!) Torpedo Boy. But like Luca Buvoli, Matthew Ritchie, and Matthew Barney, Hancock's work also incorporates an elaborate mythology that is generative involving a highly developed cast of characters that play integral roles in the plot that Hancock has captured in a variety of media.

Hancock lives and works in Houston where he was a 2002 Core Artist in Residence at the Glassell School of Art of the Museum of Fine Arts, Houston. He earned his BFA from Texas A&M University, Commerce and his MFA from the Tyler School of Art at Temple University in Philadelphia. He has most recently been the subject of a major exhibition, "The Wayward Thinker," his first in Europe, which was curated by the Fruitmarket Gallery in Edinburgh, Scotland and traveled to the Museum Boijmans Van Beuningen, Rotterdam, The Netherlands. Hancock was featured in the 2000 and 2002 Whitney Biennial exhibitions. His work has been the subject of one-person exhibitions at the Contemporary Arts Museum, Houston, the Modern Art Museum of Fort Worth, and the Museum of Contemporary Art, North Miami. He has also been featured in an episode of Art 21, a TV series about contemporary art, dealing with storytelling.

View a clip from Cult of Color: Call To Color, a new ballet commissioned by Ballet Austin and created by Trenton Doyle Hancock, choreographer Stephen Mills and composer Graham Reynolds. Ballet performances were held at the AustinVentures StudioTheater at Ballet Austin in April 2008.

This exhibition is organized by Assistant Curator Elyse Gonzales, and will be accompanied by a brochure publication.

The saga of the Mounds continues. Find out what the Vegans are plotting next. Join artist Trenton Doyle Hancock as he discusses his work, which he describes as: "Naughty. Nice. Unpredictable." Hancock earned his MFA from Tyler School of Art, and in 2000 he became one of the youngest artists ever included in the Whitney Biennial.

Whenever Wednesday: Hancock's House of Horrors Film Series
May 14 , June 4 and June 25@ dusk

Horror-film aficionado Trenton Doyle Hancock has selected cult favorites The Beyond, The Baby and The Driller Killer to screen on Whenever Wednesdays in May and June at dusk, following the lecture or performance. This summer, Whenever Wednesdays are all double features!

From the legendary horror maestro comes a hair-raising gorefest that is also a sanguine commentary on life and death: linking zombies to "the idea that all of life is often really a terrible nightmare and that our only refuge is to remain in this world, but outside time." Complete with crucifixions, eyeball impalements, sulfuric acid meltdowns, flesh-eating tarantulas, and throat-shredding demon dogs.

This darkly funny yet macabre film has been called "one of the weirdest movies to grace the silver screen." A social worker must determine whether the son in her odd new case study, a grown man who wears a diaper, gurgles and crawls around in a playpen, is mentally unsound, or if there are more sinister reasons for his underdevelopment. A disturbing journey into psychological abuse and male fear, with an unexpected, twisted finale.

In his low-budget first major film, Ferrara (Bad Lieutenant, The King of New York) himself stars as an artist who, driven mad by the pressures of New York life, takes to the streets and begins murdering homeless people with a power drill. A moody, gritty hybrid of Taxi Driver and The Texas Chainsaw Massacre.

ICA is grateful to the Iris and James Marden Exhibition Fund for sponsoring this Project Space exhibition and to the William Penn Foundation for primary sponsorship of the Ramp. ICA acknowledges the support of The Horace W. Goldsmith Foundation, the Commonwealth of Pennsylvania Council on the Arts, The Dietrich Foundation, Inc., the Overseers Board for the Institute of Contemporary Art, friends and members of ICA, and the University of Pennsylvania. We are also grateful for the in-kind support of the James Cohan Gallery, New York and Dunn and Brown Contemporary, Dallas.

Institute of Contemporary Art University of Pennsylvania
118 S. 36th Street, Philadelphia, PA 19104
ICA is open to the public from 12pm to 8pm on Wednesday through Friday and
from 11am to 5pm on Saturday and Sunday.
Admission is FREE everyday.
Free admission to the Institute of Contemporary Art at the University of
Pennsylvania for the public is sponsored by Glenn R. Fuhrman (W87/WG88)
Fund.