'Appropriation' brings together new work by eight leading artists of their generation and reflects the diversity and complexity of current visual art practice in Ireland. 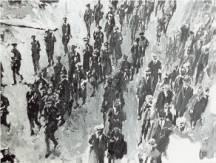 'Appropriation' brings together new work by eight leading artists of their generation and reflects the diversity and complexity of current visual art practice in Ireland. The exhibition examines our relationship to landscape, politics, science and popular culture and as the title suggests reflects the way in which much current visual art practice whether intentionally or inadvertently assimilates art historical and contemporary cultural references.

John Paul McAree's paintings look at the mythical status within Irish history and popular culture of political figures such as Michael Collins and Eamon de Valera. The works refer to a hybrid of styles from Richter to Auerbach to Yeats the paintings are deliberately deceptive in that they at first seem nostalgic, scenic and uncontroversial until the sources for the images reveal themselves to be sites or signifiers of troubled histories. No less controversial are the paintings/drawings of Ian Charlesworth in which he replicates UVF graffiti found in public lavatories. The paintings move from almost total abstraction to the stark graphic symbolism of the UVF text. The work seeks to question the affiliations and authorship ascribed to in this and other paramilitary graffiti. Mary McIntyre's new series of photographs can be traced to the 19th century German Romantic and Dutch landscape paintings of Casper David Friedrich and Jacob Van Ruisdael. Incorporating the allegory of traditional painting McIntyre comments on our current relationship with the industrial and rural landscape.

Martin Healy's series of photographs 'Looking For Jody': Amityville (2001) starts as an exploration of the town of Amityville, New York which was the subject of a book and feature film in the 1970's. Healy is interested in exploring the crossover point of memory based on cinematic experience and the memory of real-life events, specifically how they blend to create a new fiction. Susan MacWilliam also draws on cinematic references in her new video work based on Dario Argentos obscure 1971 film 'Four Flies on Grey Velvet', MacWilliam's work 'After Image' delves into the bizarre and the extraordinary exploring the myth that the last image seen before death is retained on the retina of the eye. Dan Shipsides, Allan Hughes and Niamh McCann similarly make reference to such diverse source material as sport, science and military camouflage to create an exhibition, which is as rich in meaning as it is in medium.