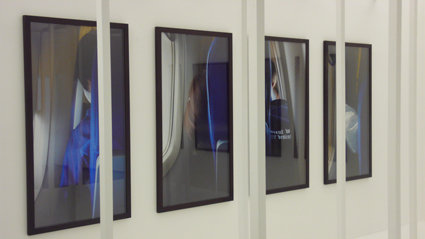 Rui Calçada Bastos’ CABIN FEVER, a work which explores the experiential borders of travel and frames a peripatetic vision, showcases from the 23 April – 23 May 2009 at Appleton Square. This exhibition presents a new collaborative endeavor between Vera Cortês Art Agency and Appleton Square.

Presenting a selection of 8 large-format photographs, the installation is combined with a structural intervention, where the artist has constructed a labyrinthine grid through which viewers must maneuver, in order to view the images up close. Contrary to how we may habitually expect to move through an exhibition space, CABIN FEVER thus probes at the destabilization of our perspectives by necessitating the sensation of constantly shifting navigational axes.
The series of photographs in the installation was developed over the span of more than a year, presenting a non-linear, fragmentary narrative of the artist’s journeys. Taken on different plane trips, each photograph frames a restricted viewpoint from Bastos’ allocated window seat. Rather than a full frontal portrait, the rear view of the dormant, dozing stranger occupying the seat in front expresses a formal aesthetic of its own, yet also reveals the partiality of individual perspective. Consequently, the artist expresses through his vision the unknowability of an Other that mirrors the opacity of our Selves.
Certainly, the hours of our existence in mid-air are the hours in which we live in a state of limbo. Miles above the ground, time zones and outlines of continents begin to converge. Routine activities that we normally perform from day to day and to a particular time schedule morph into interrupted sequences of movement. Oftentimes, we sleep when we would normally be awake, waking when we would otherwise sleep. The act of traveling, of being “on the road”, becomes an act of modification that affects our daily rhythms of living, at least for the duration in which we find ourselves caught in this somnambulistic non-place. Akin to being in a state of sleep, the mind roams between consciousness and dream. Within this liminal space, we can neither name a ‘here’ nor a ‘there’, or say that we have ‘arrived’ or ‘departed’. Moving within the maze-like structure of Bastos’ work, we unconsciously re-enact our movements and modes of existence on board airplanes. The boundaries of geographical borders and time may seem to collapse in this situation, yet our physical and private spaces simultaneously shrink. How many times does the disturbing notion occur, that we are somehow breathing the same limited oxygen, recycled air?
While the notion of travel and of being in a non-place is often associated with a utopian, universalizing vision of global liberty and of the freedom of movement, its opposite is a dystopian one – that of cabin fever. Idiomatic and almost mythic in its description, cabin fever refers to a claustrophobic reaction, mostly believed to be a psychological syndrome, that occurs when a person or persons are confined in the same space for an extended period. Rui Calçada Bastos’ CABIN FEVER evokes a vivid consideration of the romantic and anti-romantic associations of travel in a single, poetic gesture.

“Now behind the modern blue of this glass airport, she rests like a sleeping black moth, her vague umbra cast across the floor from an inchoate source of light. A ghost caught in some inexact moment, calling into being what the living wish to forget. I almost know her. I sit for awhile beside her, looking out at the tarmac beyond the viewing gallery. Here, a Boeing 747 sits diagonally across us. There, ground aviation crew stroll across a clear runway. Leftover stars recede into orange and white streaks smeared across a gradually lightening sky.
I am far from someone you would call romantic, although I am enjoying this natural spectacle of change before me; that which always follows after me and despite of me.
Night to dawn. Dawn to day. Sky. Blue sky.
The red navigation lights on the aircraft wings blink on and off.
A rush of claustrophobia hits me. I travel too often.
Fatigue lingers on. Nausea. My eyelids grow suddenly heavy; at the brink of being stolen again by sleep at the wrong hour. I have missed a few flights this way before, waking up short of the clock; miles away, with the feeling that I was born too late.”