Viagens com a minha tia. Solo show. "The archive is about the adminstration of things and lives, about a featly to facts, a positivism that is challenged by Blaufuks' poetic and evocative work.(...) Much as the things copied and preserved might be connected with the life of the artist, what they mean to us is central, they are cues to our recollections and associations." (Dario Oliveira) 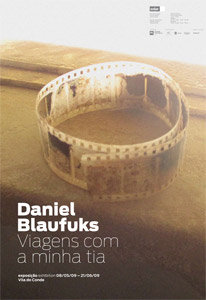 Once I met a well-travelled man, who kept all the papers that came into his possessions. Letters and books, but also bills, vouchers, photographs, cinema and museum tickets, newspaper clips and tax declarations. He archived it all away in file cases and boxes year after year. This was a scrupulous journal of his life, of what he did, what he spent, what and where he ate, but did not include any personal notes, no records of his thoughts or feelings.

This note by Daniel Blaufuks might be seen to describe Album, 2008, a book of a collection of fragments, of journeys and journeying: of used tickets— for the Taj Mahal, for Madame Butterfly, for Joan Baez— of handwritten notes, typed pop lyrics, the backs and fronts of photographs, a lucky four-leaf clover, the packaging for photographs, strips of colour negatives, the backs and fronts of envelopes, receipts, postcards and so on. Like much of Blaufuks’ work, the book speaks about limits, about how much can be said about experience through details and traces, what residues of a life might remain. This is the stuff of archives. Only the ordering system and cataloguing associated with the archive is set against the meandering, associational drift the fragments set in motion. The archive is about the adminstration of things and lives, about a featly to facts, a positivism that is challenged by Blaufuks’ poetic and evocative work.

In his beautiful and emotive film, Under Strange Skies, 2002, Blaufuks deals with the refugee experience of his Jewish German grandparents, who fled Nazi Germany to settle in Lisbon in 1936. Blaufuks grew up on the fifth floor of the same building where his grandparents lived and in the film conjures up traces of their experience through testimonies, stories, films, photographs, documents, visas, and personal letters. It is an emotive response to affective material, a story about dislocation, loss, fear, love, forced exile and the desire to find a sense of belonging.

In Album details of the exit and entrance visas on a passport, the refugee identity card, connect the qualities of this book with the experience of exile. And in many senses it is about travel, of placelessness, the movement of letters, tokens of journeys: the ashtray from Jerusalem, the souvenir slide collection of Holy Views, the back of an airmail letter with the address telling us where it was sent from, Tangier, Morocco, and there is even a 3-D postcard of the Twin Towers, that now strikes a traumatic and rather dissonant note.

There is no photography as such in Album, photographs crop up as pictures and everything is presented in the form of photographic reproductions, as flat material objects that have been laid out and copied in colour against the white pages of the book. Album describes a life through details. But whose life? That the recipient of many of the letters and the notes is Daniel Blaufuks, might invite us to think of all these things being about the author, a kind of self-portrait, but like the well-travelled man in the opening quote, there are no records of his thoughts or feelings. Subjectivity is kept in check.

The book is nevertheless about an affective relation to things, such material is valuable and valued. The tatty little ticket is a memento of an experience that remains beyond description. Each artefact is a little prompt, or cue to something else, something bigger. The use and the texture of use is important here, the things that are depicted are never unused, never mint. Much of the material is given a certain historic look, even the memory drive of the computer on the book’s last page is given an odd, rather antique cast.

Memory’s relation to photography and film is integral to much of Blaufuks’ work. One page in Album presents a package for films saying ‘MEMORIES FADE, YOUR PICTURES SHOULDN’T’ and in his book of texts, The Archive, Blaufuks includes a quotation from John Berger which says how: “All photographs are there to remind us of what we forget.” Before Album we are invited to remember. Much as the things copied and preserved might be connected with the life of the artist, what they mean to us is central, they are cues to our recollections and associations. We do the memory work.

In contrast, the video work Now Remember, 2008, invites its subjects to talk alone to a static camera for fifteen minutes with the direction they must say what they remember. They do the memory work. In some senses the videos deal with the genre of portraiture. This is emotional and slightly voyeuristic for the viewer, an encounter with strangers through the intimate technological form of the Ipod, which is used for their display. Now Remember takes its cue from Andy Warhol’s Screen Tests, where subjects were left alone before a running camera. The Screen Tests were silent and slightly slowed down and black and white. Blaufuks’ videos are raw and crude by comparison, the production techniques are low and unrefined, there is no recourse to the eroticism of the face, which becomes a defining characteristic of Warhol’s films. And unlike Warhol’s subjects who are told to simply sit and face the camera, Blaufuks’ subjects are given something to do. They have a task.

Their disclosures of what constitutes a life links to the archival propensity of this work, so much detail. Immersed in the recollections of other people, one should begin to question whether this is about empathy or difference. The humanist premise about what is common and what unities us all begins to unravel in this work. These are not so much confessional videos, though at one point a woman suggests it is confessional when she tells the camera (and us) about an abortion she had. The videos, in many senses, are about what events are important, places seen, childhood events, family, friends, the pleasures and also pains of experience. Blaufuks did not know what might be dredged up in this process. One might assume this work is about being human, about what we may have in common. But there is something about the details, about the accumulation of information we have that starts to constitute a very different kind of document, much as we might relate to some of the recollections, others are more shocking and stark— “I remember the single drop of blood on the couch on the day that my friend Ray shot himself in the head.” Cumulatively the details describe something other, the strangeness of these lives of other people. What is recalled here has a relation with the succession of details preserved in Album, memory traces that simply accumulate, one after the other, but follow no clear narrative or structure. Both Now Remember and Album are about the texture of lives, lives seen through details.

In his video Perfect Day, Blaufuks deals not with details but with the stereotype and the generic, the blanket uniformity of popular mass forms of representation, the cloying clichés of a succession of sunny postcard views of mountains, lakes, hotels and cities. The repetition of such ideal and perfect imagery brings out their artifice and fakery. Lou Reed’s well-known song Perfect Day is edited and looped to provide a rather elegiac and dirge-like soundtrack to the video. The project was conceived and presented in New York after September 11th, which according to witnesses was such a perfect day.

It is in terms of the ideal and trauma, that Blaufuks has made a work closely drawing upon the Holocaust. In the film, Terezin, he colours red and slows down fragments of filmed footage the Nazis made in the ghetto of Theresienstadt, now called Terezin, a propaganda film that disguises the horrific reality in the concentration camp, made at the time of a visit by the Red Cross commission when the camp had been subject to a cleaning up programme. Blaufuks is fascinated by the falsity of this film. His transformation of the fragments takes its cue from a story by W.G.Sebald, Austerlitz, where the central character named in the title, tells the narrator about his obsession with this film, slowing it down in order to try and see if he can find a picture of his mother, who he believes died in the camp. Once the document was extended to four times its length, it revealed previously hidden people and objects, and created a different film altogether, closer to the horrors of the camps the Reich were covering up— a darker, nightmarish and grotesque world, in which “The men and women employed in the workshops now looked as if they were toiling in their sleep, so long did it take them to draw needle and thread through the air as they stitched, so heavily did their eyelids sink, so slowly did their lips move as they looked wearily up at the camera.”

The connection with Sebald stemmed from Blaufuks’ fascination with a chilling photograph in Austerlitz, one of many photographs dispersed throughout the story, giving a certain evidential and historical weight to the fiction. The photograph shows a room filled with open shelves up to the ceiling where the files on the prisoners in the Theresienstadt concentration camp were kept. Blaufuks went to Terezin, and took his own picture of the room, which is closed off by a glass door and now forms part of the small museum where the prison was. He says how he initially saw the photograph in Sebald’s book “as a metaphor for his own work.” As a picture of an archive one can see the relation to his own art, his own obsession with archival material, the fragments and traces of lives, from his own family to the people, young and old, he videos for Now Remember. It also relates the archive to the Nazi’s Final Solution. And it is in relation to the Holocaust that one begins to fully understand the importance and centrality of memory to Blaufuks’ distinctive, affecting and haunting art.

Mark Durden is Professor in Photography at Newport School of Art, Media and Design, University of Wales, UK. He has published over a hundred reviews and articles on contemporary art and photography. His most recent book, co-authored with David Campbell, Variable Capital, considers the relationship between art and consumer culture and was published by Liverpool University Press in 2007. Together with Campbell and Ian Brown, Durden exhibits as the artists’ group, Common Culture. They will have a solo show at Solar in Autumn 2009.

OPENING RECEPTION ON THE 8TH OF MAY AT 22H