The Triennial of art in France. A multiplicity of places, scenes and circuits 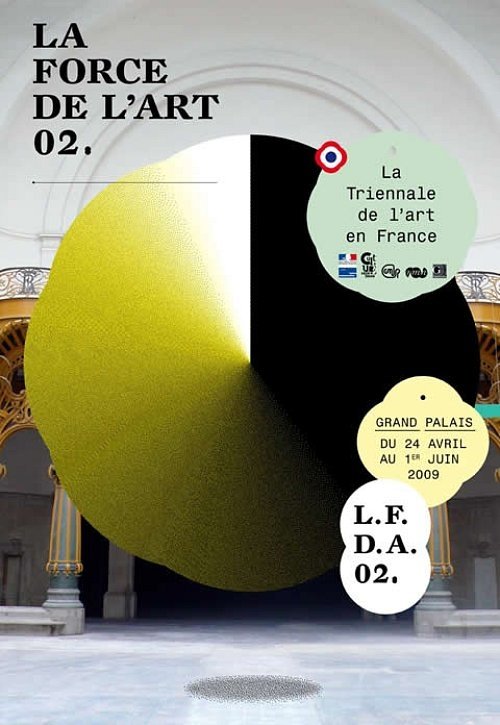 A triennial event organized at initiative of the Ministry of Culture and Communication, LA FORCE DE L’ART aims to put on stage contemporary French creation and the artists who bring it about, with all the diversity of their origins and aesthetic choices. This second FORCE DE L’ART 02 will be presented in the Nave of the Grand Palais in Paris, from April 24th to June 1st 2009.

Three renowned figures are responsible for curating LA FORCE DE L’ART 02: Jean-Louis Froment, Jean-Yves Jouannais and Didier Ottinger. They associated architect Philippe Rahm with their project, choosing him for the original and creative rapport he maintains with the space; he would construct an installation equal to the project's ambitions.

LA FORCE DE L’ART 02 splits into four Space-Times. A multiplicity of places, scenes and circuits, offering visitors original, varied and intense artistic experiences. So many events and singular worlds, responding to and encountering each other. So many works, selected for their expressive force, each bearing witness to the itinerary in view for a given contemporary artist, his commitments and his aesthetic choices.

In the spectacular Nave of the Grand Palais, the White Geology creates the first Space-Time, which receives the works of the Residents. A world of tectonic plates, surmounted with volumes springing from the ground, unfurling and dividing itself in accordance with the singular expression of each exhibited work or group of works. It is a world of substance, an abun- dant and a rich space, the movements and figures of which are shaped as an architectural environment, halfway between village and landscape. This world of artistic situations, close and intimate, or widely opened outward, create the condi- tions for a dynamic relationship between the works, the public and the space preceding them, transforming the visit into an intensely poetic experience.

Another time, other scenes: LA FORCE DE L’ART 02 will also spread outside the Grand Palais, unexpectedly taking place in other "mythic" places symbolic of the Capital. Through a series of events, sometimes surprising, always unexpected, the Visitors, renowned French artists, will reinvent the living performance that is art. Throughout the entire period of the exhibition, the Guest artists will succeed each other in the Nave of the Grand Palais, creating a continual festival of events and performances: musical initiatives, live performance, speaking, borrowing and exchanging. Through about a dozen evenings, built on the principle of encounter, difference and the intermingling of disciplines, will weave multiple exchanges and dialogues between artists, occasions for strange blendings, where each art work and each gesture will reveal the unexpected.

Finally, LA FORCE DE L’ART 02 will take place entirely on the national scene, thanks to private and public initiatives, including Art Centres, the FRACs (Regional Contemporary Art Funds), museums and foundations which will enrich this second triennial with their offerings.

The goal of LA FORCE DE L’ART 02 is to permit all, including the youngest publics, to perceive the challenges of contemporary art, by offering a chance to approach the most varied subjects and debates of current society, through an intense artistic experience, deeply rooted in the richness of its originality and its diversity. To contribute to this, a policy of innovative and committed mediated learning will be carried out. This approach means the most varied publics can be welcomed and accompanied, through coordination with the Centre National des Arts Plastiques.
Specialized mediators will welcome and orient individual visitors; themed guided visits will be offered. A well documen- ted website will make it possible to go into greater depth to prepare the visit; video interviews can be found there, together with themed texts, photo galleries and numerous other documents.

Special learning initiatives will be undertaken to reach school groups. Numerous visit and workshop formats will be proposed for school groups ranging from age 3 to age 17, in partnership with the Ministry of National Education and French local education authorities. The proposed approaches will match school programmes which today are making a place for art education and the history of the art.

A catalogue of 144 pages will be published for the occasion and available from the event opening, to accompany the visitor.

LA FORCE DE L’ART 02 will offer a unique programme for all publics to have an encounter with creation in our time. By multiplying into so many events and in so many new sites, this new FORCE DE L’ART invents a new means of access, one that is greater and more open, to the art events of today.

- Jean-Louis Froment founded and directed the the capcMusée d’art contemporain in Bordeaux, from 1973 to 1996. He is now an independent curator of international exhibitions: the Biennale de Venise in 1990 and 1993; Jean Nouvel architecture at the Louisiana Museum of Modern Art in Denmark (2006); Chanel, l’art comme univers at the Pushkin Museum of Fine Arts, Moscow (2007).

- Jean-Yves Jouannais is a writer and art critic. He was editor-in-chief of the review Art Press from 1991 to 1999, and has taught contemporary art at the University of Paris. He has organised numerous exhibitions including the 1995 Venice Biennale; Le Fou dédoublé ('Madness and Folly in 20th-century art'), in Moscow and the Château d’Oiron in 2000, etc.

The architecture - Philippe Rahm is an architect practising in Paris and Lausanne. He teaches in London and elsewhere, and represented Switzerland at the Venice Architecture Biennale in 2002. His work has been exhibited all over the world (Archilab in 2000, Mori Museum, Tokyo, in 2005 etc.,)

The Grand Palais
Recently renovated, the Grand Palais is considered an historical site in Paris and worldwide. Designed for the 1900 World Exhibition, it is endowed with an architecture of monumental dimensions. Its immense glass-roofed space rises to 45 meters at the high point of its dome; its nave over 200 metres long covers an unobstructed single surface area of 13,500 square meters. The Grand Palais welcomes numerous important cultural events, in particular various contemporary art events (Monumenta, the FIAC, etc.). For LA FORCE DE L’ART, the Nave is home to Resident artists, and Guest artists.
For further information: http://www.grandpalais.fr

The Eiffel Tower
The Eiffel Tower, 324 m high and weighing 10,100 tonnes, was built for the 1889 World Exhibition. Representing both technical prowess and emblematic modernity, the "Great Iron Lady" has become legendary, an international symbol for Paris. It is today one of the most visited sites in the world. Bertrand Lavier will tinker with the glittering lights on this universally symbolic monument for LA FORCE DE L’ART 02.
For further information: http://www.tour-eiffel.fr

Le Palais de la découverte
Jean Perrin founded the Palais de la Découverte in 1937 for the International Exhibition “Art and Technique in Modern Life”; at the time the west wing of the Grand Palais was set aside for this purpose. Although it was not intended to last, its success has made it a part of Paris’ heritage. In seeking to make science more accessible with a view to arousing curiosity and awakening of a critical outlook, it was a natural for receiving an installation by Annette Messager, which will send planets into orbit there.
For further information: http://www.palais-decouverte.fr

The Musée Grévin Dreamed up by Arthur Meyer, it was Alfred Grévin and his wax statues which made it live in 1882. Its incontestable success turned it into a temple to glorious history, as well as the strange, the spectacular and the sensational. A mythical place of illusions, the Musée Grévin offers the public an incredible opportunity to “get close to” the well-known figures who made history or the celebrities who make today’s news. ORLAN will be the first contemporary artist to be present at the Grévin owing to the installation of one of her artworks there throughout the event.
For further information: http://www.grevin.com

The Eglise Saint Eustache
In the centre of Paris, the church of Saint-Eustache, built in 1532, is a Gothic jewel appreciated by many important figures in French history: Louis XIV, Richelieu, Molière and Mirabeau, to name just a few. Attached both to the spiritual life and to human solidarity and culture, it has participated actively in the Nuit Blanche all-night music festival, the Autumn Festival of Paris, as well as LA FORCE DE L’ART 02 event. It is at Saint-Eustache that Pierre and Gilles will create their first Virgin with Child for one of its large side chapels.
For further information: http://www.saint-eustache.org

The Musée du Louvre
The imposing former home to the kings of France, the Louvre Palace has gradually become the mythical Louvre Museum, today one of the world’s most important and visited museums. Since its creation it has embodied a universal vision of what a museum should be and has determinedly opened itself to contemporary art by maintaining a dialogue, an essential one, between masters of the past and artists of today. It is here that Gérard Collin Thiébaut will present his Transcriptions, puzzle-artworks linked to the most famous paintings in the museum's collection.
For further information: http://www.louvre.fr

Department of Information and Communications
01 40158011 service-de-presse@culture.fr

To facilitate contact between contemporary creation and the widest possible public, prices for the FORCE DE L’ART 02 exhibition will be very accessible: admission will cost only 6 euros and the discount rate will be 4 euros. Free Under 13
Opening hours
Every day, except Tuesday
From 10 AM until 7 PM, Monday and Wednesday
From 10 AM until 11 PM, from Thursday to Sunday