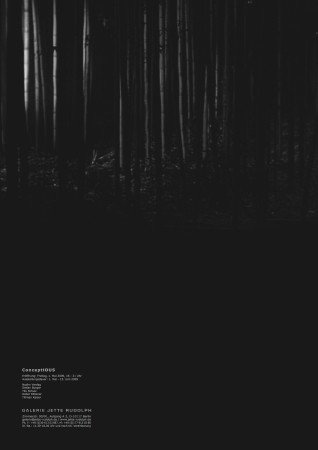 The exhibition title is a created neologism and consciously formulated in the grammatical form of an adjective to determine and underline the conceptual thought of the 60´s & 70´s of the 20th century.
The group show entitled „ConceptIOUS“, assembles international emergent artists positions; meanwhile, operating with approaches based on diverse theories they enter the transcendental draft beyond the art- immanent discussion.

NADIM VARDAG (*1980 i. Regensburg/ Ger., lives and works i. Vienna/ A) quotes motifs and narrative styles of found images, specifically in the context of the moving image in cinema and television, separates the scenes from their original storylines and redesigns minimal settings. The montages of his photographs, drawings, video loops and light projections activate the seemingly incidental: overexposed windows, guttering lights, buzzing sounds suggestive of an ongoing experience with an open ended frame of reference for associations of the recipient.

Likewise STEFAN BURGER (*1977 i. Mühlheim/ Ger., lives and works i. Zurich/ CH) experiments with medial interconnections, where the photographic image is presented in the form of wallpapers or standing objects and gains an installed character, linked to the assembly as an action. Burger´s motifs are construed objects and in spatial arrangements they customize the art historical references to the readymade as a serviceable projection.

One could draw a parallel between Stefan Burger and TILO SCHULZ (*1972 i. Leipzig/ Ger., lives and works i. Berlin/ Ger.) and their closer examination of strategies of current artistic modes of production.
He focuses on aesthetic discussions frequently combined with political-sociological impressions and enters into the local and historical conditions of issues of place/ the place of exhibitions.

DIDIER RITTENER (*1969; lives and works i. Lausanne/ CH) well known for his “transfers” – drawings with motifs taken from media sources like newspapers, art catalogues et al., transferred onto new carriers/ substrates via chemical processes. Based on potentiation of the removal of the original motif as well as the duct being the hand of the artist an abstracting time difference is created.

TILLMAN KAISER (*1972 i. Graz; lives and works i. Vienna/ A) works in traditional media of painting and sculpture, enhanced by the techniques of silkscreen and applications of found objects. Apparently abstract compositions linking to art historical shapes of the modern, within its declining resistance potential, thus become a generally available vocabulary. In combination with the ethnologic and the everyday occurrence Kaiser`s works trail some psychological but unfamiliar terrain.