Kandl's works, resulting from collaborative projects, personal contacts and research in Yugoslavia, Azerbaijan, Russia, Rumania, the Republic of Georgia and the Czech Republic, deal with the West's different political, economic, social and cultural perceptions of the East and vice-versa. 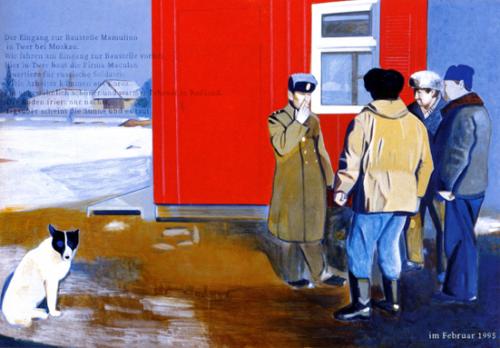 In 1994, Johanna Kandl began to work on a project looking into the withdrawal of troops from the Russian (former Soviet) garrison in WÃ¼nsdorf. Kandl, herself raised in a Vienna quarter that was under Soviet occupation from 1945-55, remembers the anecdotes circulating about the Russians, although the occupying forces had already long withdrawn. In these accounts the Russians were always mysterious figures. In the WÃ¼nsdorf project that includes paintings, photographs and installations, Kandl focuses her attention on life in a secluded enclave, and the moment in which the people living there encounter others. Her works capture both the Russians' gradual opening-up towards the Germans as well as their resettlement in areas north and northwest of Moscow. Whilst the photographs at first serve to document this process in snapshots, they are also methodically incorporated into critical notes and paintings.

In a work realised in collaboration with her husband, Helmut Kandl, Johanna Kandl concentrates on the Austro-Czech border region. Inextricably linked for centuries, Laa and Znaim were hermetically separated for the past 40 years. The period of post-war renovation was thus experienced in different ways: English was taught on the one side of the border, Russian on the other; Austrians preferably spent their holidays in Italy, the Czechs in Bulgaria or Rumania. The Kandls used vacation photographs firstly to investigate definitions of the foreign and the exotic, and secondly to promote communicative exchange in the areas where the project took place.

In her various projects, Johanna Kandl consciously exposes herself to foreign people and situations in which she is also perceived as a foreigner: "It is important for me to learn things about people who don't belong to my social class and who don't share my opinions. I see this looking into a different context as my primary task as an artist" (J. Kandl). Her paintings and collaborative works with Helmut Kandl deal with the collision of different cultures and modes of perception, but also economic predicaments. She evolves in word and image a variety of scenarios reflecting social coexistence, thereby investigating the role of the artist and his/her position in society.
Curated by Barbara Steiner