Anne Landa Award for Video and New Media Arts 2009. Each of the works articulates a double take by considering what it means to transform the self into another persona - as a doppelganger, a karaoke performer, an avatar, a robot, or as a fantasy alter-ego. TV Moore, Gabriella Mangano and Silvana Mangano create performances on video. Lisa Reihana's photographs present friends and family posing as ancestral Maori figures. Mari Velonaki creates robotic avatars, while Cao Fei and Phil Collins bring together loose collectives of people around a desire to adopt imaginary identities. 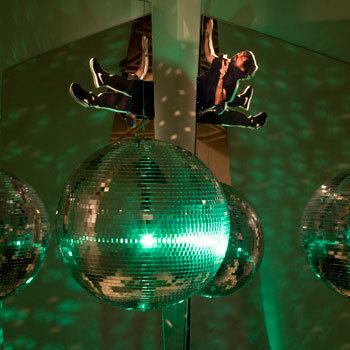 Each of the works in this exhibition articulates a double take by considering what it means to transform the self into another persona – as a doppelgänger, a karaoke performer, an avatar, a robot, or as a fantasy alter-ego. TV Moore, Gabriella Mangano and Silvana Mangano create private performances on video. Lisa Reihana's digital photographs present friends and family posing as ancestral Mâori spirit figures. Mari Velonaki creates robotic avatars, while Cao Fei and Phil Collins bring together loose collectives of people around a desire to adopt imaginary identities.

Such performances are not the pure fantasies we find in popular digital culture, where it is so easy to masquerade as another persona. Rather, these artists are more circumspect. Real time lurks within. This is the 'double', for the 'performances' have a presence in our everyday world while simultaneously engendering an imaginary guise. They shuttle between two worlds – reality and fantasy – inquiring in the prospects of a double life.

While the yearning to become someone else or to have multiple selves is not new, this exhibition approaches these age-old human desires in a new way, asking: How can we be both the self, and an other at the same time; both a self, and an out-of-body split self? What is lost and what is gained in such double visions? What is imagined and what is realised?

This reinterpretation of the self has further consequences. On the one hand, it is a way of accessing our alter-egos. At another level, it also strikes at the meanings of what it is to be different. We cannot really understand the 'other' until we acknowledge that we are all comprised of many selves. If we consider what it means to actually be an alternative persona, then the division between the self and the 'other' becomes more fluid.

The Anne Landa Award is the first biennial exhibition in Australia for moving image and new media work with an acquisitive award of 25,000 USD. The award was established in honour of Anne Landa, a Trustee of the Art Gallery of NSW who died in 2002. The acquisitive part of the award applies to Australian resident artists only.

Phil Collins
Shortlisted for the Turner Prize in 2006, UK artist Phil Collins has exhibited his videos and photographs world-wide. For his video trilogy, the world won't listen, 2004-07, Collins worked with local musicians in Bogatá to produce a fully functioning karaoke machine. The artist then spent extensive periods of time in Colombia, Istanbul, Jakarta and Bandung inviting fans to be filmed performing karaoke to the band's music. The exhibition includes the third and final chapter of the trilogy, dunia tak akan mendengar, 2007.

Cao Fei
Internationally acclaimed artist, Cao Fei, has had numerous solo exhibitions in China, UK, USA and Hong Kong. Her video Whose Utopia, 2006 is the result of a collaborative action the artist created in the Siemens OSRAM factory in Foshan, China. Workers express their dreams, fantasies and desires in the form of dance, song and performance against the spectacular proportions of the OSRAM factory.

TV Moore
TV Moore has been included in numerous group and solo exhibitions in San Francisco, Berlin, The Netherlands and Sydney. His work considers altered states such as: being under hypnosis, group therapy, brainwashing, LSD experiences, trance and sleepwalking. Moore is creating new work for the exhibition.

Lisa Reihana
Since 2006, Mâori artist Lisa Reihana has had major solo exhibitions in New Zealand and Italy and been included in numerous international group exhibitions. Digital marae 2007, is conceived as a both a double and a transformation of the ancestral meeting house. Her life-size digital prints depict friends and family dressed as contemporary male deities (atua) that appear in Mâori creation stories.

Guest curator: Victoria Lynn
Victoria is an independent curator and writer based in Melbourne. She has recently been appointed the Visual Art Curator for the 2010 Adelaide Festival.