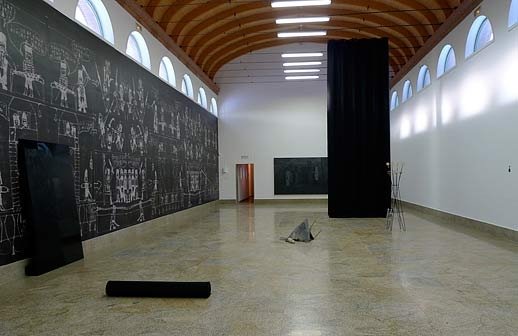 Gladstone Gallery is pleased to announce the first solo exhibition in New York of Romanian artist Victor Man. Branching across media, Man’s paintings, sculptures and installations are steeped in a sense of mysticism both beguiling and confusing. He appropriates found images and renders them in sooty tones, as if conjured out of the ash of their original context. In doing so, Man evacuates complete meaning and replaces it with a tenebrous omission that creates a subjective discourse in lieu of narrative foreclosure. This deconstructed creation of signification imparts a sense of both desire and trauma, seducing and violating any attempt at exegesis.

Man’s resistance to facile interpretation extends beyond the haunting poetry of his paintings and into his dynamic interplay of space and object. His sculptures and installations seem to haunt each other rather than present a linear logic, as their disparate materials each contribute a history of its own depleted context. As Tom Morton says in his essay accompanying his exhibition at GAMEC, Bergamo: “Instead—through the conduit of a shared material, or a common emotional pitch, or even the whispered echo of a form—meaning flames back and forth across their constituent parts, flaring and guttering, and always threatening to burn itself out.” In burying the narrative impulse, Man raises the uncanny threats of storytelling, reminding the viewer that he must ultimately confront the story he forces himself to tell. Man’s images and objects remain knowingly mute, eliciting desire even while policing their own secretive historiographies.

Victor Man was born in 1974 and lives and works in Cluj-Napoca, Romania. He has been the subject of a number of solo exhibitions at museums world wide including GAMEC, Bergamo, Italy, and Ikon Gallery, Birmingham, England. He has simultaneous exhibitions currently on view at CIAP in Île-de-Vassivière, France , and Museum Boijmans van Beuningen, Rotterdam. Man has also been included in a number of group exhibitions including “Whose (His)story,” Kunstverein in Hamburg; “Back to Black,” Kestner Gesellschaft Hannover, Germany; “Art Focus 5,” International Biennial of Contemporary Art, Jerusalem; and “ Reframing, “ CCA, Andratx/Mallorca, Spain. His work was also exhibited in the Romanian Pavilion at Venice Biennale 52 in 2007, the 2 nd Prague Biennial, and the 2008 Busan Biennial. This October, Victor Man will have a solo exhibition at the Hayward Gallery, London.