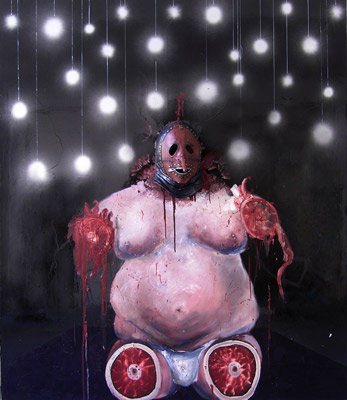 Ralf Ziervogel’s obsessively detailed drawings of human bodies exposed to apocalyptic cruelties are well known. In his words, it is a "game of systems" that acts as a continuous artistic test run. By choosing to depict his monochromatic drawings in extreme detail, the mapped out sceneries function as caricatures and pseudo-realist fantasies of violence spreading over the layers of paper as ornamental patterns. His so-called "declinations on the human body" allowed Ziervogel to develop a technique to test certain systems in order to push them towards an unknown territory.

For his solo show at Arndt & Partner, Young German Art, Ziervogel created a three-dimensional installation that continues the systematic approach of declinations. However, the theme of brutalities executed on human bodies seems to be abandoned or exposed to a process of abstraction. Juxtaposed out of reduced mathematical formulas or, in the case of his new work, A+B+Z (infinite+infinite) (2009), a simplified code of letters, each system completely dissolves into a legible constellation composed out of fragments.

Using non-hierarchical orders based on numbers, dice dots, letters and figures, Ziervogel’s art has some parallels with the conceptual art Sol LeWitt pioneered in the late 1960s, with its serial processes and formulae. However, Ziervogel deliberately undermines all the mystic auras these conceptual artists1 associated themselves with, and breaks the system with its own means. In infinite+infinite (2009), an installation that consists of over 60 drawings on a black background, a seemingly random succession of letters suddenly forms complete sentences like "If you read this, your second child will die of cancer." These sentences are not intended to shock, but rather to expose the semantic import separate letters acquire when put together in words and sentences. The sentences target the associations inherent in particular constellations of letters and the thoughts they conjure up in our minds; the rational system of the alphabetical order thus serves to activate the irrational power of our superstitions.

Untitled (2009) also works with the "declination on the human body". Black and white figures and skeletons are playfully combined in one big composition of black dots sprayed on paper. The gesture of spraying intervenes in the system of figures while also imposing an order upon them. The physical nature of this intervention is central to Ziervogel’s work, whose compressed intensity should always be understood as an act of physical labor. The figures he draws on paper confront us as forceful gestures, gestures that invariably lead us back to the body as our basis.

Ziervogel has appropriated the medium of drawing to channel his artistic explosions of pseudo systems and fantasies, which he elaborates and perfects to the tiniest detail. He plays on the visual appeal of his work to draw us in, only to seize on the connotative associations that populate our thoughts. At first glance, his drawings seem familiar and pleasingly aesthetic. In formal terms, their appeal is heightened by the focus on black and white contrasts. But as a closer look quickly tells us this is nothing more than an elegantly designed trap.

The title of the exhibition bears special mention. By calling his exhibition Young German Art, Ziervogel takes aim at the clichés that have attached themselves to discussions on contemporary art. Similar to the YBAs of the 1990s (Young British Artists), the term Young German Art has come to stand for the institutionalization of an art form that the two adjectives Young and German supposedly suffice to define.

Born in 1975 in Clausthal-Zellerfeld, Germany, Ralf Ziervogel lives and works in Berlin. In addition to solo shows at the Modern Art Museum of Fort Worth, Texas (2007), the Künstlerhaus Bethanien, Berlin (2008) and galleries in Germany, Austria, Israel and the United States, his work has been shown at many national and international group exhibitions including panic room, Deste Foundation for Contemporary Art, Athens (2006), the 52nd Venice Biennial (2007) and Made in Germany, Sprengel Museum, Kunstverein Hannover and the Hanover kestnergesellschaft (2007). His most recent solo exhibition was at the Kunstverein Ulm.

1) Sol LeWitt: "Conceptual artists are mystics rather than rationalists" in "Paragraphs on Conceptual Art", Artforum (June 1967)

The first impression created by Andreas Golder’s paintings and sculptures is one of expressive directness. Golder clearly identifies to some extent with those young Berlin artists whose bold, forceful immediacy aims to challenge the orderliness of the Leipzig School. The impact created by the way in which he applies paint and the dense working of the canvas in combination with the Baconesque fragmentation of the human body reveal a high level of energy and expression. This energy may be an act of self-liberation from the rigid structures of the academic realism that Golder encountered during his training in Communist Russia. He and his family moved to Germany in 1990 after the fall of the Berlin Wall. The demons he conjures up in his paintings reveal an uncompromising confrontational strategy. At the same time, a subtle irony always permeates his works – either by his choice of titles or by the continuous integration of the grotesque. Brutally deformed body parts are hung over a clothes line (Drama in pyjamas, 2007) and skeletons taking cocaine function as a cynical commentary on contemporary party culture (Disco hangover, 2007). The titles of his deformed sculpture heads – such as Potential hat rack and Still smiling – a medium Golder rediscovered very recently, also turn into an integral element of slapstick.

In terms of content, Golder conflates contemporary references from pop, consumer and (local) party culture with existential themes such as death, pain and faith – indicating the artist’s high degree of engagement with himself and the world around him. In his search for a language to realise an idea or a thought about the world or its imagery, Golder ultimately perceives his paintings as being "abstract". Although some elements reappear in various works, such as the light bulb in his series The artist’s studio (2005), the works never function as narratives. Rather, they are fragments or image constellations of a deconstructed world.

Golder’s fascination with artists such as Francesco de Goya or Hieronymus Bosch is evident both in terms of technique and content. Traditional elements, such as the skull as a memento mori, function as symbols that turn into direct references. The artist consciously utilises a connotative artistic language that allows viewers to decode the works, though only in part and only on the surface. Golder takes his inspiration not only from art and reference books such as the standard encyclopaedia of anatomy, but also from the imagery of contemporary magazines and music culture, from death metal to punk.

Following a very traditional approach, Golder primes his canvases and covers them with a layer of black acrylic, then he applies a clear varnish to achieve the appearance of high-gloss enamel. The quality of directness inherent in the medium of painting is particularly appealing to Golder. It allows him to formally counteract contrasts of content: In his newest works, the high-gloss aesthetic of the canvas is violated by the assemblage character of the work – cigarette butts, gloves or even the artist’s own trousers, as in Angel of Crisis with my last pair of trousers (2009), turn into Golder’s physical signature on the canvas and function as tools of his creativity.

Formally speaking, the oscillation between abstraction and figuration unites expressionistic and realistic forms of expression, becoming a celebration of the artistic act itself and painting in general. Golder perceives his own works not in terms of the gruesomeness or ruthlessness of its content, but in terms of the haptic beauty of colour and paint application.1 What Gilles Deleuze defines in the works of Francis Bacon based on Cézanne’s notion of colouring sensation2 thus finds a parallel in the radical process of defiguration that occurs in the works of Andreas Golder. Sensations of a complex and personal world are transmitted, and Golder’s canvases turn into a constant testing ground for his ongoing search.