A series of art projects 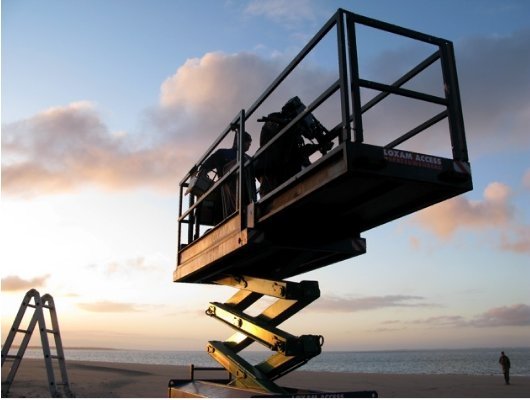 An accummulative series of newly commissioned projects in and around Maasvlakte 2, the extension of the Port of Rotterdam, The Netherlands, throughout 2009

'Portscapes' is an accummulative series of newly commissioned projects taking place throughout 2009 alongside the construction of Rotterdam's [51° 55' N 4° 29' E] Maasvlakte 2 (MV2) – an extension to Europe's largest seaport and industrial area which will be realised between 2008 and 2013 by reclaiming 2,000 hectare area of reclaimed land that will extend the Port of Rotterdam, Europe's largest seaport and industrial area by 20%. With the involvement of Dutch and international artists, 'Portscapes' aims to consider the physical and conceptual implications of the new lands of Maasvlakte 2, as well as the city-port as a distributive network – a hub of exchange across different registers at once artistic, marine and mercantile.

'Portscapes' will evolve around the leitmotif itineraries and destinations by creating events varied in size and scale such as temporary interventions, performances and site-specific audio tours, for example, Portscapes will evolve as a cultural guidebook to the port area, focusing on the future and Maasvlakte 2. 'Portscapes' will explore the material, historical, artistic, architectural, political, social, ecological pasts, presents and futures of the development as well as the ripe contexts of trade and energy.

On Sunday 8 February 2009 the inaugural 'Portscapes' project took place with the filming of '6 Hours Tide Object with Correction of Perspective' by the Dutch Conceptual artist Jan Dibbets (1941). Originally filmed in February 1969 in 16mm and titled '12 Hours Tide Object...', the film was included in Gerry Schum's seminal 'Land Art' series of films screened that same year on German public TV. Members of the press, Portscapes artists and invited guests witnessed the drawing of a isosceles trapezoid in the sand using a bulldozer – the shape will consequently appear as a square in the resultant film due to the angle of perspective. The new 2009 realisation was filmed 40 years later to the month on the beach of the Maasvlakte, an area that will soon be transformed with the construction of Maasvlakte 2. The resulting film will be presented in the Spring 09 (date TBA) – production stills here.

'Portscapes' also had a stand during Art Rotterdam (5–8 February 2009) distributing a prologue publication designed by Ben Laloua / Didier Pascal with contributions by Jorge Satorre, Paulien Oltheten, Maria Barnas and Erick Wesselo amongst others.

A second and third cluster of projects will take place during the Spring coinciding with the official inauguration of the visitor's centre 'Futureland' and in September/October, coinciding with Wereldhavendagen (World Port Day, 4–6 September) and the International Architecture Biennial Rotterdam (24 September 2009–10 January 2010).

Latitudes’ site visits photo documentation from May, July and November 2008 can be seen here.

Portscapes is commissioned by the Port of Rotterdam Authority with advice and financial support from SKOR (Foundation for Art and Public Space, Amterdam) and is curated by Latitudes.

Why Portscapes
At the extremity of The Netherlands, to the west of Rotterdam, an extension to the port of Rotterdam has been underway since September 2008. With the construction of Maasvlakte 2, The Netherlands will become 2,000 hectares larger and the port, already the biggest in Europe, will increase in size by 20%. The construction of Maasvlakte 2 prompted the Port of Rotterdam Authority to join with SKOR (Foundation Art and Public Space) in asking artists to reflect on the port, its expansion and its function. Under the title 'Portscapes', an artistic voyage of discovery will take place throughout 2009, touching on the port's architectural, political, social and ecological past, present and future.

Artists
Portscapes involves artists from The Netherlands, China, Mexico, Austria and the United States. By creating events varied in scale, temporary art works, performances, excursions and screenings in the port area, for example, Portscapes will evolve as a kind of cultural guidebook to the port area, focusing on the future and Maasvlakte 2.

Programme
Portscapes' projects will take place at different times and locations. The launch takes place during Art Rotterdam in February. The opening of Futureland, the information centre for Maasvlakte 2, is a further occasion around which art works will be presented (end of April). Other projects will be realized to coincide with the World Port Days and the Rotterdam Architecture Biennale (September, October). Check the agenda on this site.

Construction work on Maasvlakte 2 will continue until 2013. Following 2009 as a pilot year, the Port Authority plans to commission art projects annually during the next four years in cooperation with SKOR. Through the diversity of artists taking part in Portscapes and the different perspectives their work will suggest, a range of possibilities for future artistic engagement will be explored.

Organisation
Portscapes is a Port of Rotterdam Authority initiative developed with advice from SKOR (Foundation Art and Public Space) and programmed by the curatorial duo Latitudes (Max Andrews & Mariana Cánepa Luna). Latitudes is invited on the basis of its international experience with exhibitions and publications in the field of land art and ecology.