Tyson's four rooms display a universe of objects, paintings, photographic works and installations that reveal elements of our reality constructions and explanation models in material form, using a wide variety of artistic styles. The painter Dawson deliberately chooses a "naÃ¯ve" style for his painting, so that he can make the presence of ancient explanation models for time and reality visible as effective elements within our present. 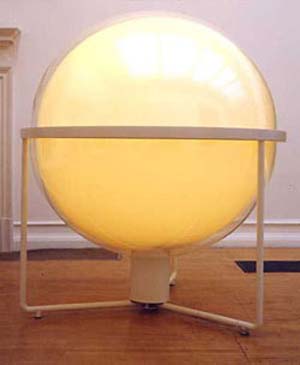 Keith Tyson's four rooms display a universe of objects, paintings, photographic works and installations that reveal elements of our reality constructions and explanation models in material form, using a wide variety of artistic styles. Philosophy, science, technology, language and description patterns for forms of nature and culture are all ordering structures for reality. Tyson shifts them through a number of transitory formations and an infinite list of possibilities in his laboratory. He realizes works that relate chaos and order, space and time, possibility and actuality to the individual viewer as he or she stands confronted with a landscape showing the simultaneity of micro- and macrocosm.

In Keith Tyson's work we are confronted simultaneously, as an idea and in material form, with the library of Babel: an infinite number of rooms and books that themselves open up rooms and ideas, multi-dimensionally and to infinity, as described by the writer Jorge Luis Borges. This universe contains no two books (or things) that are identical, it is infinite both in its spatial extent and its spatial reduction; it is perhaps only time. But we also find ourselves facing an image of the internet, the nervous system and Marcel Duchamp's conceptual and parascientific strategies, or taking a wild ride along the boundaries of scientific models that are Science Fiction and reality at the same time.

The exhibits in the exhibition are hybrid forms - they generate locations in the form of games, images, machines or mechanisms, from which literature, inventories and phenomena unfold their linguistic, mathematical and physical elements into spatially and temporally infinite spheres. The artist started on the basis of a new group of his works created for his one-man show in the South London Gallery this year, then extended the exhibition to include some very recent and some older works: a "Supercollider", 2001, is based on the idea of the Cern particle accelerator. It brings descriptions and illustrations of existing elements of reality together multi-dimensionally in one place and condenses existing "material" as a network of logical and illogical simultaneities; this appears with the "Think Tank", 2002, a neuronal network of forms and descriptions that interweaves fictions and is expotentiated in its turn by the work "Escape Mechanism", 2002, which uses linguistic lists of events to make time and space collaborate. A wall painting that reveals a view of a cellular structure as a gigantic landscape finds its counterpart in a photograph of banal aluminium foil, simulating the image of the universe existing on the basis of just one element. A closed system ("Tiny Bubble of Complexity", 2001) generates an infinity of colours in reaction to itself; a sculptor equipped with planetary rocks circles lazily around itself. "Night in a Billion", 2001, offers unimaginable masses of possible groupings. The view of stellar constellations consists of twelve individual water-colour sheets that can create sky in more that four hundred million combinations.

"Random Tangler (Recursive Transition Knot)", 2001, also produced endless variations: this work is a game that can be played by any number of players. Like Keith Tyson's "Art Machine" based works, which are already familiar, it delivers a linguistic definition of a work that the players create themselves. In this game, systematics and freedom, chance and intention, authorless definitions and individual interpretation generate all conceivable styles and appearance-forms for works of art simultaneously. His computer-assisted "Art Machine" works related to a potentially infinite information network of internet resources, but the "Random Tanglers" play-box deals with the potentially infinite network of individual subjects and the variations, transformations and varieties that the interplay of "systems" that we would call subjective or objective can create. Two other works in the exhibitions also makes the system called "human being" central when confronted with the landscape of the system called "reality": "Now Capacitor (Mirror)", 2002, and "AMCHII - Angelmaker Part 1 (15 Seconds before the Apocalypse)", 1999, show time and lay it open to experience: the shortest time-span in which the brain can register an image is a hundredth of a second. A digital clock in the mirror of the "Now Capacitor", in which the viewers are reflected as images themselves, counts the average length of a human life of 76.5 years in these units, while the video "Angelmaker" carries the images the individual has imagined to the outside. Thinking thinking and seeing.

deliberately chooses a "naÃ¯ve" style for his painting, so that he can make the presence of ancient explanation models for time and reality visible as effective elements within our present. Portraits of historical figures, landscapes that amalgamate creation myths with phenomena of the modern world, still lifes and abstract pictorial compositions risk taking a clear-eyed look at concepts of tradition and modernity and are metaphorical images of a cultural and historical way of looking at things that sees history not as research but as the origin of our reality. Was George Washington a good person because he decided to become not the king but the president of America, and what social phenomena generated this? What influence on culture is exerted by real figures like the "Unabomber", who sent a letter-bomb once a year as a protest against the dominance of high-tech, or the fictitious character of Barone Ramparte in Italo Calvino's "The Baron in the Trees", who moved into the treetops as a protest against reality? Has our relationship with numerology, astrology or rituals changed, even though we still call the days of the week after heavenly bodies? Is "the wild" natural and good and civilization always a problem? The "Big Bear" in Verne Dawson's painting is looking circumspectly from the starry sky at an auspiciously distant point at which an observatory can be seen in the wild landscape: the "wild" bear, the bear in the constellation and the scientific facility for researching the images that were read in the skies to provide direction and assurance even in ancient times, are bought together in a single image. Thus the artist's pictures are anything but naÃ¯ve in terms of content, and constantly deal with the relationship of civilization or culture to what we customarily call nature; they are asking that morally interpretative analyses and approaches should be revised.