The Cooperative for Proletarian Art of Friedrich Brass

The Collection of the German Avant-guard in the Soviet Russia 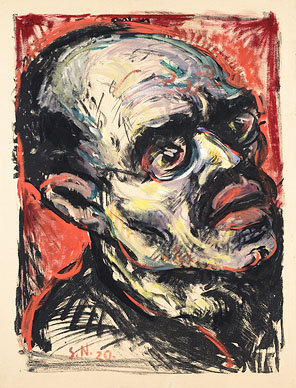 The Exhibition in the Twelve Column Hall of the New Hermitage is dedicated to the history of the first collection of the modern European art, brought to the Soviet Russia after the Revolution. The exposition, which represents 170 graphic arts, was organized by the State Hermitage Museum together with the Scholarly Research Museum of the Russian Academy of Arts and the Library of the Russian Academy of Arts.

The Cooperative for the Proletarian Art (Genossenschaft für proletarische Kunst), founded in Berlin in 1920, consolidated the goals of the business venture, that was in fact the cooperative, which united artists, who jointly dealt their works of art, and was also an organization of strictly social and political character. Among the members of the Genossenschaft were already well-known masters of the German Expressionism - Erich Heckel, Karl Schmidt-Rottluff, Otto Mueller, Christian Rohlfs, as well as the artists of the new generation, whose artistic career started after the end of the First World War. Among them are the Berliners George Grosz, Ludwig Meidner, Max Kaus, Erich Godal, Conrad Felixmuller and Walter Jacob from Dresden, Rudiger Berlit from Leipzig, Gustav Heinrich Wolf, Walter Gramatte and Karl Opfermann from Hamburg, Franz Seiwert from Cologne, Arnold Schmidt-Niechiol from Worswede, Max Burchartz and Reinhard Hilker from Hagen, Rudolf Hainisch from Frankfurt-on-Main and others. The variety of artists’ names represented in the collection is of great value, offering an overview of German art around 1920, encompassing different trends of widely differing artistic and aesthetic merits.

The Genossenschaft presented the newest trends of the modern German art from jugendstyle (Siegfriend Behrend) and early Expressionists artists from the group Die Brücke (Schmidt-Rottluff, Heckel) to Dadaisme (George Grosz). Despite different artistic views all those artists were united for a short time by the idea of ‘proletarian’ art.

The founder of The Cooperative for Proletarian Art was Friedrich Wilhelm Brass. He was born in the Rhineside province of Prussia in the town of Krefeld in 1873 in a working class family. He described himself in surviving documents as an artisan or a dealer in works of art. For some time he was working in Krefeld at a lithographic shop and was possibly printer by profession. Between 1905-1908 Brass had art gallery in Krefeld where he dealt in old and modern art, books and magazines about art. That undertaking soon collapsed.

Brass’s undertaking in Berlin in 1920 were supposed to combine commerce and politics, apparently he hoped that in the situation of revolutionary appraisal the new art would be demanded by the general working public. Brass was going to deal in mostly inexpensive printed graphic arts, considerable part of which had political propagandistic character. However the lack of substantial financial means had great effect on Brass’s plans. The Genossenschaft didn’t have its own exhibition premises. Brass established The Genossenschaft publishing house but managed to publish just lithographs series Revolution by Erich Godal and portraits of Karl Liebknecht made by Arnold Schmidt-Niechiol. That venture existed for a short period of time and was eliminated. All that the Genossenschaft owned was sold to Russia in October 1920.

The History of Purchasing the Collection

The Collection of The Cooperative for Proletarian Art (Genossenschaft für proletarische Kunst) was brought to Russia in November 1920, when the Russian delegation returned to Petrograd from Germany. That delegation was headed by Grigory Zinoviev, Chairman of the Executive Committee of the Comintern, who attended the Congress of the German Independent Social Democratic Party. It was the first international trip by any Soviet leader after the Revolution.

Zinoviev was accompanied by Ilya Ionovich Ionov (1887-1942), a professional revoluationary who had spent many years in prison and exile. Ionov took great interest in literature and was writing poems. In his early youth he used to work at the print shop for some time. After the Revolution Ilya Ionov was appointed head of the State Publishing House in Petrograd. He organized a publishing house that published political, scholarly, academic literature and fiction, controlled all publishing activities in the city, private print shops and for some time he even worked as a censor. During his short trip to Germany, Ionov made many purchases of items which arrived by sea in Petrograd. Amongst the shipload lists of goods purchased by Ionov we find ‘sent by Brass 4 crates, roll and package of books’. This is how the collection of The Cooperative for Proletarian Art (Genossenschaft für proletarische Kunst) ended in Russia.

Probably Ionov, who had access to Comintern’s money, bought all that Brass had as the property of The Genossenschaft. All the prints and drawing in the collection bear an ink stamp with the word ‘Genossenschaft’ and an inscription made by Brass. The attempt to find works with such stamp in the museums of Germany failed.

In the beginning the collection was kept in the State Publishing House in Petrograd that was situated on Nevsky Prospect in the Book House. Since no inventory was made in 1920, we can not be certain of the precise composition the collection in Russia. Today we know of 260 graphic works to be found in St. Petersburg in the State Hermitage Museum, the Scholarly Research Museum of the Russian Academy of Arts and the Library of the Russian Academy of Arts. Together with Brass collection several rare items ended up in Petrograd - full set of war time publication - Kriegszeit and Bilderman as well as quires Schaffenden from 1919-1920, in which the most significant graphic artists of Germany of that time participated (in total about 400 engravings and lithographs). Hereby, by the end of 1920 the most represented collection of modern German graphic art outside Germany was brought together. By means of the highest-level works of art this collection demonstrated the development of German Art during the first decade of the 20th century.

In the beginning of 1920s many of the works found their way to the hands of the city’s leading collectors of contemporary works on paper: Iosif Rybakov, Vsevolod Voinov, Georgy Vereysky, Y. Kaplan. Gradually those works by German artists of the Genossenschaft that had been in private hands made their way into the Hermitage, from the 1920s and 1930s right into the 1980s. From the beginning of 1920s the Hermitage saw the formation of a collection of contemporary Western art as a key priority. Works from Brass collection formed the basis of the museum’s collection of contemporary German art.

Howerver, appearing in Petrograd in the autumn of 1920 the collection found no interest. For Soviet Avant-guard woks of German artists were perceived as insufficiently revolutionary especially after experimental art of Malevich, Tatlin, Filonov. For the artists of the realistic trends there was no need for German revolutionary art.

For several years certain works from the collection became the exhibits of a large-scale Printed Works Exhibition of 15th - 20th centuries that took place in the Russian Academy of Arts Museums between 1927-1929. Later on for a long period of time they languished in the reserves of the Academy of Arts and the Hermitage. During the prewar times and later German Expressionist art was in effect banned. Only in the second half of 1950s works from Brass collection were allowed to be presented at the exhibition of German graphic art from the end of 19th till the beginning of the 20th century in the Hermitage. By that time the story behind the works was forgotten. German Expressionism was now perceived without that political element that had so irritated viewers and was perceived simply within the overall context of the transformations taking part in European art at the start of the twentieth century.

The Cooperative for Proletarian Art of Friedrich Brass was also forgotten in Germany. During the fight against ‘degenerative’ art the Nazi destroyed most part of the Expressionists’ works that were stored in the museums of Germany. At present German Art Collections preserved just a few pages printed at Brass’s publishing house. The history was also cruel towards the young artists who were cooperating with the Genossenschaft. Their biographies, destinies, destinies of their works were closely intertwined with devastating events of fascist terror in the field of art and war. They were prohibited, persecuted, their works were mercilessly destroyed by fires and bombings. That is why the value of the Genossenschaft’s Collection, preserved in Russia, is so high. It presents a unique image of full and diverse artistic life in Berlin in 1920.

For the first time once again the Exhibition in the Hermitage united all the works descending from the Genossenschaft für proletarische Kunst and aimed at attracting attention of the public to that interesting episode of Russian-German artistic connections and to the artistic organization of Brass, that was forgotten even in Germany.