A Retrospective. The Dusseldorf photographer presents more than 30 large-scale photographs, as well as an installation that reflects the author's ongoing fascination with the theme of the individual and the crowd. She works on the concept of the mass - by parades, choirs, refugees, concert-goers, rallies, football fans, exiles. Aided by the writings of Siegfried Krackauer and Elias Canetti, the artist developed her own "aesthetic of uniformity". 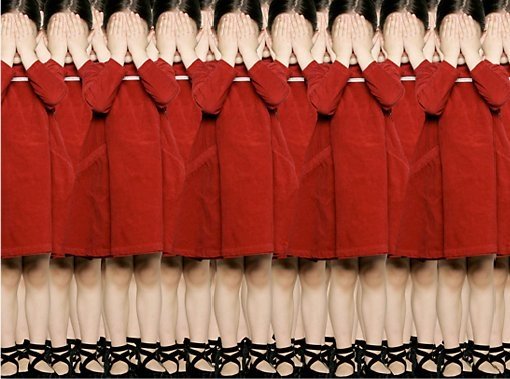 Moscow Museum of Modern Art together with pARTnerproject gallery opens the first solo museum exhibition of Claudia Rogge, the well-known Düsseldorf photographer. "A Retrospective" presents more than 30 large-scale photographs, as well as an installation that reflects the author’s ongoing fascination with the theme of the individual and the crowd. The show is curated by David Galloway, art critic for the International Herald Tribune and former Chief Curator of the Tehran Museum of Contemporary Art.

For the last several years, Claudia Rogge has reflected on the two seemingly paradoxical and contrasting phenomena, individualism and mass society. She has sounded out her subject matter in different ways and with different strategies. The artist has also evolved a fascinating theoretical underpinning for her idiom, originating in her study of social and communications sciences in Berlin and Essen, where Claudia began to work with video. She became increasingly fascinated by the concept of the mass – by parades, choirs, refugees, concert-goers, rallies, football fans, exiles. Aided by the writings of Siegfried Krackauer and Elias Canetti, Claudia Rogge developed her own "aesthetic of uniformity."

Though she had already drawn praise as a video artist, Claudia first received major attention in 2002 with a project entitled "Mob," suggesting both mobility and an uncontrolled mass. It consisted of a truck whose transparent trailer was loaded with 5.000 hairless identical doll heads. Rogge drove the installation around Europe and triggered off an open discussion at any place she stopped. Such shifting, mobile ensembles were the prelude to the first photo series, "Rapport," for which a single figure was repeated in such a way as to create geometric patterns. Such elegant but essentially static works were soon followed by "Uniform," for which the protagonists were joined into increasingly dramatic compositions that owed a clear debt to the genre of performance.

In composing her intricate photographic ensembles, Claudia Rogge is simultaneously ringmaster, choreographer, and collagist. Each new series of works typically begins with all-night sessions in which the artist takes as many as 10.000 individual photos, later assembling selected images on the computer to give the impression of single moments in a group performance. In fact, Rogge asks each of her solo players to demonstrate the same simple tasks or motions. Dance, theater and – above all – opera are major sources of inspiration here.

The retrospective exhibition at the Moscow Museum of Modern art documents the evolution of Rogge’s "aesthetic of uniformity," from the early pattern-pictures to the latest examples of the remarkable visual choreography with which she explores the human comedy or tragedy.

The present exhibition has been realized with the generous support of Galerie Voss, Düsseldorf, as well as various private lenders.