The University of Trash / Rashid Johnson / In Practice Summer '09 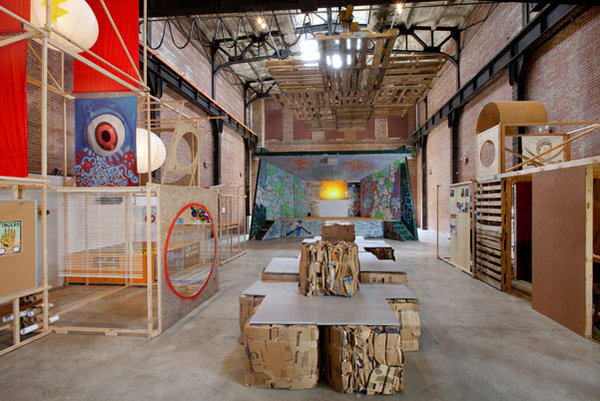 SculptureCenter is pleased to present The University of Trash, a project by Michael Cataldi and Nils Norman. The University of Trash will be on view May 10-August 3, 2009 with an opening reception on Sunday, May 10, 2009 from 5-7pm. The exhibition will run parallel to an extensive series of related workshops, talks, concerts, and film screenings

The University of Trash is an experiment in alternative architecture, urbanism, and pedagogy taking place in SculptureCenter's main space. Drawing from utopian ideals and radical urban projects undertaken since the 1960s, the artists will create an installation that functions as a temporary, makeshift University - hosting courses, lectures, presentations, and workshops. A Free Skool program will operate within the University, offering the public the opportunity to propose their own courses - open and free for all who sign up and attend throughout the duration of the exhibition.

Working collaboratively with students, local organizations, activists, and academics, the artists have been gathering and researching material related to activities of the 1960s countercultural Appropriate Technology movement, experimental pedagogy, adventure playgrounds, Non-plan, emergency and low-impact design, the vernacular of informal housing, and historical sites of activism.

The University of Trash partly stems from Norman's research of Adventure Playgrounds. A popular movement that began in the late 1930s, Adventure Playgrounds reclaimed bombed out or otherwise derelict urban spaces as spaces for play as open ended ground for experimentation. Building on Cataldi's research on New York's Lower East Side, the artists will construct a functional model of the Tompkins Square Park Bandshell in collaboration with Just Seeds/Visual Resistance Artists' Cooperative.

High School students from City-As-School have been working with the artists to create The Skool of Refuse and Appropriation, a vernacular living/working node as part of the installation. Research, discussion, drawing, and model making determine the form and function of the structures. The University of Trash is also hosting the House Magic Bureau of Foreign Correspondence, a working research office dedicated to squatted social center movements throughout Europe, containing images, documents, and videos collected by Alan Moore and members of ABC No Rio visual arts collective in New York.

Throughout the exhibition there will be a mix of workshops, screenings, and presentations focusing on grass roots, self-organized urbanism, DIY architecture and the evolving aesthetics and politics of public space. Scheduled programs include a low-power radio transmitter building workshop, and presentations and film programs by collaborators including Free 103.9 & Prometheus Radio, Neurotransmitter, CUP (Center for Urban Pedagogy), Build it Green, NYC, and Alastair Gordon. Max Goldfarb's M49 mobile radio truck will broadcast Summer Sessions, a series of outdoor concerts on weekend evenings in June and July. A schedule of events will be released in a separate press release and updated regularly on SculptureCenter's website.

The University of Trash is presented in dialogue with Red Lines Housing Crisis Learning Center, an exhibition by Damon Rich at the Queens Museum of Art. These two exhibitions are collaborating to co-host public programs, in addition, each exhibition will include one element from the other.

Michael Cataldi (born 1982, Philadelphia) is an artist whose work intervenes in the public sphere. Cataldi's site generated projects, ranging from ad hoc architectures to improvised play structures, propose the re-imagination and re-use of space and place.

Nils Norman (born 1966, UK) is known worldwide as an artist and activist in the fields of art and urbanism. Specializing in political and economical theories of utopia and distopia, Norman uses his knowledge to examine and critique existing structures and social situations, particularly within urban landscapes.

For his first solo museum show in New York, Rashid Johnson will present a number of new large-scale sculptural works that suggest altars, entertainment consoles, or constructivist-like abstractions alongside photographs and works in other media. Considered one of the up and coming artists whose work has been termed "post-black", Johnson engages with racial identity but in ways that insist on fluidity and contradiction. Johnson uses materials such as steel, poured wax, and shea butter, while juxtaposing relics and artifacts in an approach that flirts with the shamanistic.

SculptureCenter is proud to present new works by Michael Ashkin, Michael Blum, David Dixon, Simone Leigh, Cindy Loehr, and Virginia Overton in the twelfth installment of In Practice. The exhibition will be on view May 10-August 3, 2009 with an opening reception on Sunday, May 10 from 5-7pm.

Michael Ashkin: Untitled (where each new sunrise promises only the continuation of yesterday), [an abridged title, the first of twenty-one lines], 2009
Michael Ashkin's project consists of a miniaturized model of a fictional urban agglomeration at a scale of 1:128. Built entirely of found cardboard, stretching the length of the central basement tunnel at SculptureCenter the piece emulates a stretch that would extend for two miles and can be only be observed from one point of view situated well beyond its area of maximum density. The model is based on an architectural/urban typology increasingly found on the outskirts of many cities as a result of rapid urbanization. Though it reflects no actual location, various specifics have been pulled from a wide selection of photographs and global satellite imagery.

Michael Blum: Psychics VIII : Debra Huelsebusch & Marion Hedger / The Sculpture Center, 44-19 Purves Street, LIC, NY 11101, 2009
Michael Blum's project invites two psychics to amble and react to the upper and lower level of SculptureCenter's gallery spaces. The two women communicate their experience and impression of the space as they freely walk through it in the presence of a camera. The unedited video is part of a series of psychic readings of spaces, first realized in Cape Town, South Africa in 2003. The project was conceived as an attempt at connecting with the past of domestic or exhibition spaces outside the limitations of rational discourse.

David Dixon: The Grave is Empty, 2009
One of the elements in David Dixon's installation is a gravity defying rock stack. It has been used as a prop in two separate films, once as a miraculous occurrence, and in the other as a sculptural occurrence of questionable merit. To the artist, "art requires the expression of difference, choice, or originality. Rock stacking does not try to do this, it only delimits natural forces: gravity, friction etc. There is the choice to stack one rock on top of another but there is nothing original in this, [it has] been done before, for centuries. It could be argued that rock stacking is the original, and best, expression of the modernist notion of truth to materials, yet, here, in Styrofoam, deceit has been employed to go beyond the material." Dixon is also interested in how the stack can acquire different meanings within different contexts, undermining its existence as a stand-alone object.

Cindy Loehr: The Advisor, 2009
The Advisor says, "the revelation we're ready for is the revelation we'll get." The Advisor's ghost-like figure is inspired by a cut out pattern from an old paper project book. Though larger-than-life, it is unassuming in its construction: simple pattern pieces held together by nuts and bolts. Between decoy and protagonist, the humorous figure of the Advisor delivers philosophy and idiosyncratic ruminations, on life, death and hope. Combining prosaic descriptions of life in the city with aphoristic existential advice, small books of the speech are available for visitors to take home.

Simone Leigh: The Gods Must be Crazy, 2009
Simone Leigh's new video work departing from the opening sequence of the film The Gods Must Be Crazy (1980) presents conflicting narratives concerning authorship, labor, and recent artifacts. Leigh uses the anthropological term skeuomorph as a central concept to her exhibition, describing a derivative object that retains some sort of physical or metaphorical elements of the original, a substitute used to ease a sense of loss. Leigh's installation also includes a video portrait of Zira, the heroine of Planet of the Apes, a surrogate for a woman with an unclear racial identity. The objects and videos in Leigh's installation investigate the ethnographic object, the black body and feminisms.

Virginia Overton: Untitled, 2009
Virginia Overton's sculptures use material such as beams, pallets squished between walls with shims, and large sonotubes. Overton prefers to highlight what she calls "unskilled skills" - like driving a truck and stacking chairs or pallets. Often delicately levitating, the lightness of the works contrasts with the sturdy materials, rough edges, and spills involved in the process of making them.


Image: Installation view of The University of Trash, 2009.

Opening reception on Sunday, May 10 from 5-7pm.