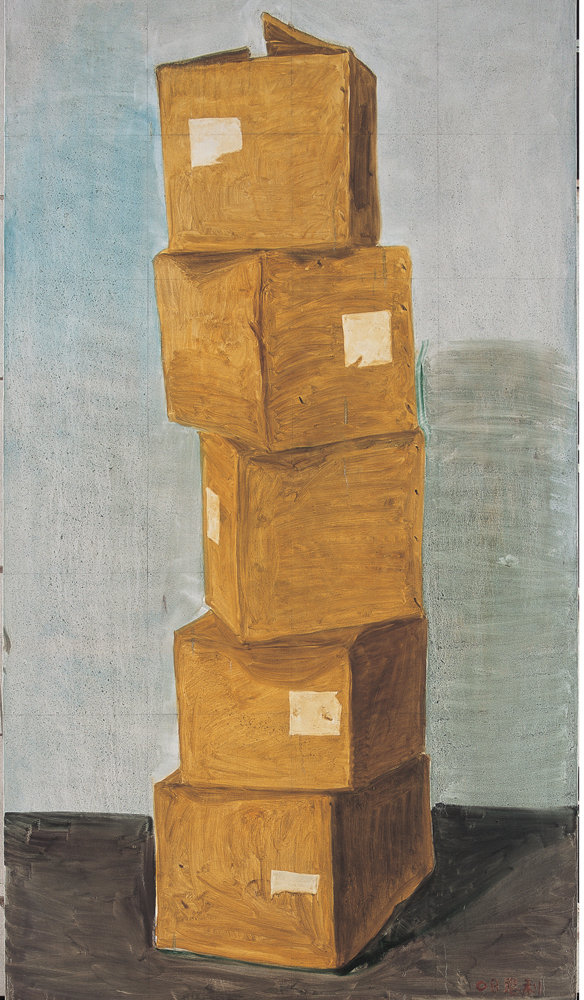 Zhang Enli
For his first institutional solo exhibition in Switzerland, Shanghai-based artist Zhang Enli will show a selection of his most recent paintings. Zhang Enli occupies a special position within contemporary Chinese art, because his style evolved independently from the big Chinese currents in painting such as Political Pop, Kitsch Art or Cynical Realism. Simultaneously opposing and prolonging the programme of a revolutionary socialist art, Zhang Enli's paintings, though interpreting a certain leftist orthodoxy in their subject matter, engage with the "real" to such an extent that they move beyond any symbolic or imaginative function. The 'reality' he wants to expose is not veiled by formal conventions and jaded images of an ideological programme or bourgeois culture, but seems to have much more to do with a 'threatening' real characterised by a weird tenacity. But Zhang Enli's paintings also invoke the artificiality of our reality. His studio in Moganshan Road (the centre of Shanghai's contemporary art scene) is almost windowless, so he depends on artificial light sources. This is discernible in the paintings – he uses the peculiar circumstances in his studio to his advantage; they lend his paintings an urban, yet also slightly strange aura.

Zhang Enli guides the viewers' gaze towards the incidental, towards that which is often overlooked. However, his works are not an attempt to exalt our paltry everyday reality either. Instead, Zhang Enli simply and in a distanced facture depicts a presence, which is only accessible to the attentive viewer. Ordinary objects like buckets, light bulbs, beds, chairs and shoes are his motifs. His gaze is focused on particular details, which are rendered from unusual perspectives that evoke photographs. In the tradition of the still life, Zhang Enli precisely directs our attention to the gloss of a table's surface or to a piece of cloth covering two chairs. Human figures are completely absent from his paintings, but it is exactly this absence that alludes to their potential presence. Zhang Enli is never alluding to metaphysical dimensions, but rather to an understanding of objectivity as a construct in an ever-changing universe. In a patient and decisive way, Zhang Enli creates a universe that is close to himself, by scanning its surfaces, but in the endgame the positioning of the onlooker in relation to what is depicted becomes decisive, whereby the authority of the work enables somebody to come closer or not.

Zhang Enli was born in the rural town of Biacheng in the northeast of China. He graduated from the Arts & Design Institute at the Wuxi Technical University in 1989. Only one year later, he participated in a group exhibition of works by promising young artists at the Shanghai Museum of Art. Zhang has lived and works in Shanghai for twenty years now.

Curated by Jonathan Watkins and Philippe Pirotte, the exhibition is conceived and organised in collaboration with Ikon Gallery, Birmingham and is generously supported by the department of Culture of the City of Bern, Hauser & Wirth Gallery, Zürich/ London, and ShanghART Gallery, Shanghai.

A fully illustrated book, Zhang Enli -- Container, with a text by Philippe Pirotte has been published by Steidl Hauser & Wirth in 2008

Wednesday 3 June, 7 pm:
Ulrike Öttinger: Exil Shanghai
Germany/Israel 1997, 275 minutes
Historical and contemporary documents are used to evoke the lives of Jews (six German, Austrian and Russian) and their shared exile in the city of Shanghai. Öttinger's much lauded and award-winning documentary presents an often-ignored aspect of history.

Wednesday, 24 June, 7 pm:
Lou Ye: Suzhou River
China/D 2000, 83 minutes
This feature film tells a mythical parable on love and the quest for love from different perspectives and on several temporal levels. The editing and the rhythm of the movie, as well as its setting -- the Shanghai docks -- create a harsh, urban poetry.

Wednesday, 1 July, 7 pm
Animation
Ca. 130 minutes
Animation has been an important part of the Chinese film industry since the 1950s, and Shanghai has always been the genre's creative nexus. The presentation consists of a selection of animated movies, in which different periods, techniques and styles are represented.