Works from the Frac Bourgogne collection 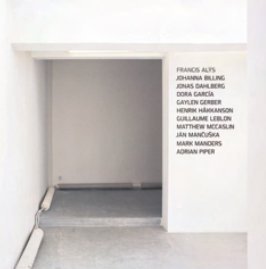 The group exhibition The Eventual is the brainchild of Eva González-Sancho, director of the Burgundy Regional Contemporary Art Collection [FRAC Bourgogne, Dijon], who reworks a first presentation of four artists at the Frac Bourgogne in 2007. It is supported by the Maison de Bourgogne in Prague (CZ) and by the European and International Direction of the Burgundy Regional Council (FR). After Naturalia in 2005, this second collaboration with Futura contributes to the spreading abroad of a project created in Dijon (FR), by the Frac Bourgogne.

These works suggest different landscapes in which an event or situation may occur at any time, greatly altering them. The works create a state of suspension, interruption, and deliberate unfinishedness, in which nothing seems to be happening, and nothing is explicitly said, either, but where, precisely for these reasons, everything becomes possible.

All works presented here belong to the Frac Bourgogne collection except Ján Mancuska’s one which has been borrowed for the occasion to another French public collection: Frac Lorraine (Metz).

The eleven works brought together incorporate video, sound, sculpture, text and site specific installations in the exhibition area like so many ways of suggesting to visitors that they grasp a present state. Indeed, by different devices, the works dilated the here-and-now, and came up with its essence, honing both consciousness and experience. Within the visit, the public will face and improve the little by little possible irruption of an event.

These different densities of the present offered by the works in the show The Eventual are so many ways of asserting the work as a way of being in the world, through the different forms in which narrative and performance have been redeployed, after the radical breaks of the 1970s, less for their aesthetic dimension than for the way in which they address the spectator. A bilingual catalogue about the two times of this exhibition will be published in 2009.

This project is supported by the Maison de Bourgogne in Prague (CZ) and by the European and International Direction of the Burgundy Regional Council (FR).

Opening on Friday May 15 th from 6 pm