With Sumo, the Helmut Newton Foundation presents what might just be the most spectacular and expensive photography book project ever. Ten years ago, publisher Benedikt Taschen persuaded Helmut Newton to agree to produce a gigantic book with a print run of 10,000 copies, all signed by the photographer. Accompanied by a custom-made book holder by Philippe Starck, the book found its way into the homes of well-heeled buyers. In parallel a selection of photographic work by Mark Arbeit, George Holz and Just Loomis. 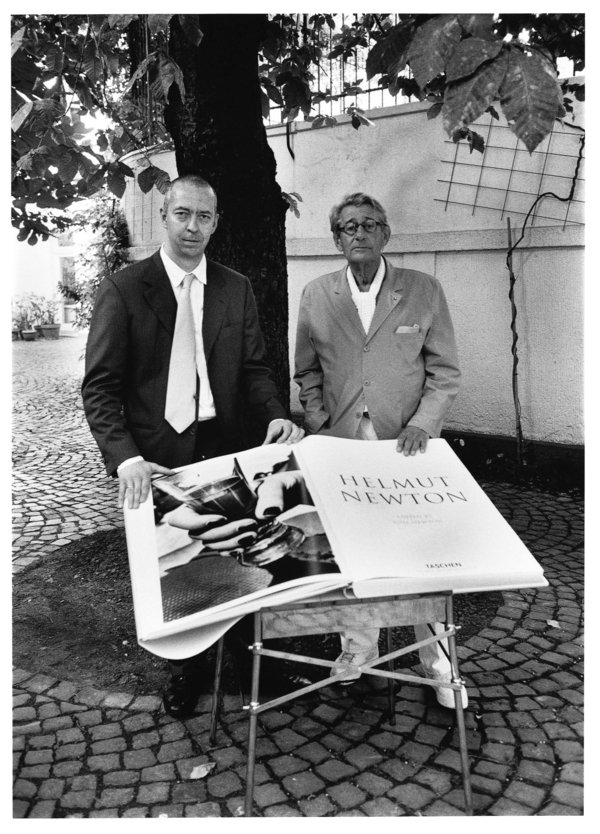 With SUMO, the Helmut Newton Foundation presents what might just be the most spectacular and expensive photography book project ever. Ten years ago, publisher Benedikt Taschen persuaded Helmut Newton to agree to produce a gigantic book with a print run of 10,000 copies, all signed by the photographer. Accompanied by a custom-made book holder by Philippe Starck, the book found its way into the homes of well-heeled buyers.

Now, for the first time, its 394 photographs will go on display to mark the 10th anniversary of a photography publication that today is a much sought-after collector´s item. To accompany this presentation, Taschen will publish a smaller and revised version of the book for the regular book market.

But it was with SUMO that the Newton/Taschen team topped them all in the field of photo books. Such monumental tomes already existed in the history of books and bookmaking, but these were bibles, books of hours and atlases, followed later - in the second half of the 19th century - by illustrated travelogues with inserts of original large format prints.
This presentation of the corpus of images comprising SUMO traces the book's unique history. All of the book's pictures appear 1:1 as framed pages; additionally, there is a selection of original photographs, in black & white and color. Still other prints document the book's own elaborate production and glamorous presentation. Newton's fashion and nude photography, portraiture as well as advertising images hang side by side in equal standing. Some of these images can be found in other Newton publications, while others premiered in the book and may only now for the first time be seen on exhibit.

In addition to SUMO, Mark Arbeit, George Holz and Just Loomis will be presented at the Helmut Newton Foundation with their photography under the title `Three Boys from Pasadena´. In the late 70s, they were students at the Art Center College of Design in Pasadena, California and later became assistants of Helmut Newton.

As with previous exhibitions at the Helmut Newton Foundation, the work of Newton's companions will be presented in parallel to SUMO. Mark Arbeit, George Holz and Just Loomis were students at the Art Center College of Design in Pasadena, California, when they met Newton in the late 1970s; later they would assist him regularly.
Now in their first group exhibition, the "three boys from Pasadena" have been invited by June Newton to present a selection of their own photographic work. This will be complemented with memorabilia from their decades-long and close friendship with Helmut and June Newton.

Some of Mark Arbeit's pictures are formally quite unusual. In his photo-technical experiments with deconstructed Polaroids enlarged onto photo paper, he reveals the other, flip side of the photographic image and its creation. Here and in his collages with African tribal art, Arbeit makes reference to experimental phases in the history of nude photography, for example in Surrealism. In another series, he portrays nudes in Parisian artist ateliers. The painters themselves are absent, represented only through their works on the easels and walls. The nudes in the studio medially paraphrase the paintings through their presence.

In addition to his contract celebrity portraiture that includes the likes of Brad Pitt, Angelina Jolie and Madonna, George Holz also looks to the female form, naked and life-sized, in interiors or natural settings. Some of his more stylized images evoke stills from early Fritz Lang films, while others are strictly unaccessorized - such as his photograph of Rachele, reclining poolside in Hollywood. The reciprocal sexual attraction often evident in his images evokes a pastoral affinity reaching towards a mystical fusion of man and nature. What captures Holz's eye here is timeless, natural nudity, occasionally cast by refined shadows varying subtly across the body's surfaces.

Just Loomis opts for a direct and unadorned look at American everyday life. In black & white and color, we see the faces of young waitresses, skateboarders or passers-by looking back at us, uninvolved and unaffected. Independent projects that have emerged from his magazine work in fashion and beauty, such as his documentations of the fashion industry backstage or images from on the road, are now on display at the Helmut Newton Foundation. Hardly anything seems staged - these are intensely visual encounters with strangers. Timeless and yet contemporary, the portraits of Just Loomis play with the beauty and the banality of the moment.


Image: Helmut Newton and Benedikt Taschen with one of the first copies of Sumo, Cologne 1999 © Alice Springs