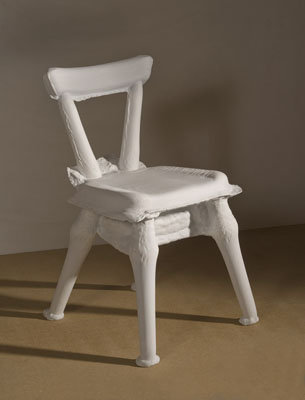 Originally from England and currently living in Canada, where he has spent the greater part of his life, Eric Cameron is a major figure in Canadian art and a meticulous analyst of his own artistic practice. A multidisciplinary artist, critic and professor, he is the author of a series of masterful works as well as numerous essays about his own work and that of other artists.

Among his creations, Eric Cameron is best known for his Thick Paintings, a series of conceptual sculptures composed of a significant object having belonged to someone close to the artist and progressively covered with countless layers of gesso, which little by little, modify the object's initial shape. White and matte, compact and often strange in appearance, this unusual corpus of works contains something quite significant: the memory of all of the gestures that have been laid upon them. Lettuce, Exposed/ Concealed: Laura Baird VIII, Alice's Yellow Rose, etc, share the artist's quotidian life within varying lengths of time, and each work is continuously transformed until acquired by a buyer. The philosophical as well as aesthetic importance of Cameron's work is brilliantly and tenaciously in line with the greater practice of sculpture and actively participates in the renewal of issues surrounding contemporary sculpture.

Record of Work exposes artistic creation but also the notion of work. The exhibition presents a group of sculptures from the series "in progress" entitled Thick Paintings (to be continued), as well as a selection of "Sheets of check marks" which have considerable documentary importance as they attest to Cameron's work programme over the last thirty years. In an exhaustive manner, Cameron has been tirelessly making notes to remind himself of what – that is to say, what material and what number of operations – has gone into each object he has created; and, in passing, of what has gone into his own life, in so far as it has been largely devoted to the creation of these objects. Grouped together in a Ledger, the "Sheets of check marks" are in some way the mathematical portrait of the artist in the continuity and discontinuity of his cumulated gestures. The exhibition Record of Work aims to reveal the nature of this unusual relationship to a work of art and to a document.

A new version of this exhibition, produced in collaboration with Maurice Fréchuret, will be presented at the Musée Chagall in Nice, France in the spring of 2010.