The exhibition focuses on the work of Matisse between 1917 and 1941, during which time Matisse developed his most individual and distinctive style but which has been the subject of less attention than the early and late phases of his activity. Marked by the shadow of World War I and the menace of the impending conflict, this period was of crucial importance for the dissemination and consolidation of modern art, a process in which Matisse undoubtedly played a central role. 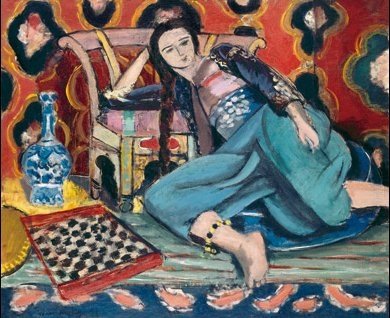 Matisse’s career can be divided into three major periods: the years running from the end of the 19th century up to 1917; a middle period from 1917 to 1941; and a final period from 1941 until the artist’s death in 1953. The present exhibition focuses on the middle period, which is the longest and the least well understood. Marked by the shadow of World War I and by forebodings of the next worldwide conflict, this period can be divided into two very different halves; the first one, spanning the 1920s, was characterised by the growing acceptance of modern art both by society and institutions, a process in which Matisse was the leading figure together with Picasso; and the second half, which was dominated by the world financial crisis of 1929, the Depression, the serious social and political tensions the 1930s, and finally World War II.

In 1917, with increasing signs that World War I was coming to an end, Matisse decided to confront the new era that seemed to be dawning by completely devoting his attentions to pictorial investigation. He moved away from Paris, leaving his family behind, and settled in Nice. Abandoning his large-format paintings of flat colours characteristic of his early period, which he himself termed his “decorative” paintings, Matisse aimed to establish a closer relationship with the viewer’s gaze, focusing on a type of work that he called “painting of intimacy”. In order to do so the artist believed that he needed to re-introduce into his painting the feeling of volume and space that he had abandoned in the previous period, achieving this through the use of colour and form but avoiding chiaroscuro and traditional perspective. While Matisse’s points of reference had previously been the great decorative traditions of art, particularly Byzantine and Islamic, he now looked for inspiration in the intimate manner of 17th-century Dutch painting while pursuing his interest in Cézanne more deeply. He did so without abandoning the formalist aesthetic that had always guided his concept of painting, a formalism inspired by his reading of two of the great founding poets of modern culture, Baudelaire and Mallarmé, and one based on the conviction of the autonomy of art in relation to life.

However, as the years passed Matisse’s isolation and the uncertainties of his new quest weighed on him increasingly. From 1927 his output declined in quantity and he eventually ceased painting altogether. In 1930 he received a commission that enabled him to emerge from this crisis, returning to “decorative” painting. Alfred Barnes, a Philadelphia businessman who had assembled a remarkable collection of Impressionist and modern painting, asked Matisse to paint a large mural composition for the building that Barnes had constructed to house his collection. Matisse decided to return to the theme of The Dance, which he had depicted on various occasions before the war, particularly in two large canvases of 1909-1910. His new version required almost three years of work, was much larger than the previous ones and was conceived in a more epic, abstract tone.

When Matisse returned to his “painting of intimacy” in 1934 the historical climate had changed and his investigations became increasingly self-absorbed and inward looking. He gradually abandoned his intention to express volume and space through colour, and his compositions now concentrated on line. When the German army occupied France in 1940 Matisse decided to remain in the country, unlike many other artists and writers who moved to the United States. In 1941 he underwent a major operation and was almost on the point of death. The artist never fully recovered and from then onwards had to remain in bed for most of his time. This did not, however, prevent him from working, submerging himself in his creative activities and focusing on a series of drawings that he entitled Thèmes et variations. The exhibition concludes with this endeavour, which for Matisse marked the end of an era.