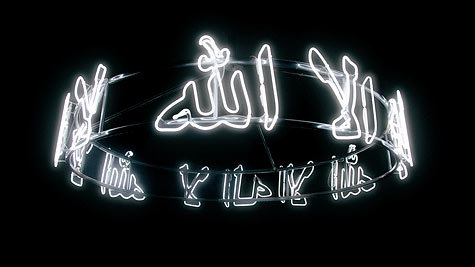 He who knows himself and others
Here will also see,
That the East and West, like brothers,
Parted ne'er shall be.

Thoughtfully to float for ever
'Tween two worlds, be man's endeavour!
So between the East and West
To revolve, be my behest!

Turquoise Mountain is delighted to present East-West Divan: Contemporary Art from Afghanistan, Iran and Pakistan during the Biennale di Venezia 2009.

The exhibition will present recent works by ten artists from three countries, better known in the West for stereotypes of terrorism and Islamic extremism than for their rich artistic heritage and vibrant contemporary cultures.

East-West Divan will challenge these negative perceptions with works by both emerging and established artists, who are engaged in an ongoing dialogue between the artistic traditions of East and West. Nowhere is this dialogue more present than in the grand architecture and decorative traditions of Venice, whose lucrative trade routes with the East produced some of the most spectacular fusions of Eastern and Western art and architecture.

East-West Divan meditates upon the links between the artistic traditions of Venice and the Persian artistic heritage shared by all three countries in this exhibition. The exhibition will include new works of art responding to traditions such as miniature painting, calligraphy and Islamic geometric design, revealing how contemporary artists, far from being overburdened by an ‘anxiety of influence’ from their rich cultural past, have found new ways to challenge and transform this cultural inheritance.

Playing with a broad range of references which bring together Pop art and Shi’ite shrines, modernist abstraction and Islamic architecture, the exhibition will reflect on how culture and history can co-exist with today’s globalised, melting pot society. The title of the exhibition is taken from a collection of poems by Johann Wolfgang von Goethe, inspired by the Persian poet Hafez, and refers to the ‘divan’ or council chamber, as a physical symbol of the coming together of different cultures.

East-West Divan presents a subtle and complex meditation upon the realities and perceptions of contemporary life, history and politics in the Middle East, South and Central Asia, unraveling – just a little - the tightly knotted relationship between East and West.

Turquoise Mountain is investing in the regeneration of the historic commercial centre of Kabul, providing basic services, saving historic buildings and constructing a new bazaar and galleries for traditional craft businesses. It has established Afghanistan's first Higher Education Institute for Afghan Arts & Architecture gathering some of the greatest Masters in Afghanistan and training students to produce masterpieces in wood, calligraphy and ceramics.

The Institute has been used to develop new Afghan designs, promote Afghan handicrafts through national and international exhibitions and media campaigns, open new markets, restore key parts of the Kabul museum collection, renovate public spaces and build capacity in the government and universities.

Most importantly however, the Foundation uses the resources and skills of the Institute to serve Afghan communities. Its particular focus has been the area of Murad Khane in the old city but it has also worked in a fort in Kart-e-Parwan and invested in the potter's community in the village of Istalif. In each case, the Foundation has delivered services to the community, supported local businesses, trained local students, protected historic areas, attracted visitors and improved living standards.