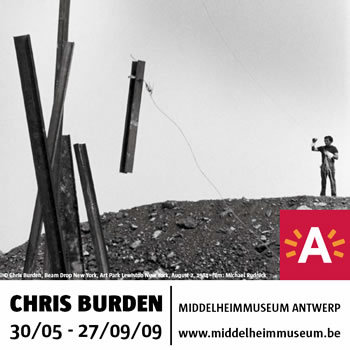 The American artist Chris Burden will display a number of sculptures and installations at the Middelheim Museum summer exhibition this year. He will furthermore perform the spectacular live installation of Beam Drop Antwerp – in which steel beams will be dropped into concrete from a height of 35 metres – for the general public in the sculpture park on 30 May.

Chris Burden (1946, Boston, Massachusetts) can without exaggeration be regarded as a key player in contemporary art. His performances in the 1970s redefined the possibilities of the medium; the sculptures and installations he made in later years opened up new horizons of what is physically possible in the visual arts.

With his celebrated early performances, such as Shoot (1971), for which he let a friend shoot him in the arm, or Trans-fixed (1974), for which he let himself be crucified on a Volkswagen Beetle, he not only established his reputation as an infamous iconoclast, he furthermore created a number of absolute icons of contemporary art (paradoxically enough) quite early on in his career.

His later installations and sculptures deftly combined incredible technical skill with an uncompromising eye for detail. Whether he was demanding the utmost from his body, constructing scale models of bridges with Meccano, designing cost-effective vehicles, making phantom ships that sailed unmanned or letting steamrollers fly: he relentlessly attempted to transcend the physical, while studying the psychological impact of actions and objects, thereby placing the relationship between artist and spectator under the greatest possible amount of pressure.

The exhibition in the Middelheim Museum clearly demonstrates that the artist's style has significantly changed since the days of those early hard-hitting performances, although the same basic underlying ideas are still present in them. It offers visitors a unique combination of work from the early stages of Burden's career as well as some of his recent work.

The climax of the exhibition is Beam Drop Antwerp on Saturday 30 May. This live installation is the physical manifestation of the concept of creating a large abstract expressionist sculpture using coincidence and gravity. The first Beam Drop took place in Art Park, New York, in 1984. The installation was dismantled – along with the rest of Art Park – and destroyed by the US government in 1987.

The installation at the Middelheim Museum is created by dropping approximately 60 large steel beams (some up to 12 metres in length and weighing 1000 kg per piece) from a great height into a large pit of wet concrete. Each beam is lifted to a height of 35 metres, and then released in freefall with the aid of a specially designed trigger. The gigantic effect of gravity, applied to these massive construction materials, is as natural to the spectator as the hand of the artist making an abstract impressionist painting. The installation is open to the public from 10 am to 8 pm on 30th May.

The Middelheim Museum will also display an entirely different application of the raw material steel. Chris Burden will display a selection of his bridges in the Braem Pavilion and Middelheim Castle. These scale models of special bridges from around the world (Victoria Falls Bridge, Tower Bridge in London, Antique Bridge, Indo-China Bridge, etc.) are made entirely of Meccano and its American counterpart, Erector. As pure as they look from the outside, they are ingeniously constructed on the inside. The very limited number of different basic pieces of the Meccano sets necessitates a great creative feat to exactly replicate the existing bridges – often miracles of ingenuity themselves. The result is near-classic sculptures that add a whole new meaning to the role of the sculptor. In addition, five video installations will help situate these sculptures in the context of the artist's oeuvre.

With the live installation, videos and sculptures by Chris Burden, the Middelheimmuseum will once again be shining the spotlight on a pioneering artist; an artist who not only changed the history of visual arts forever, but even today is singlehandedly reinventing modern sculpture.