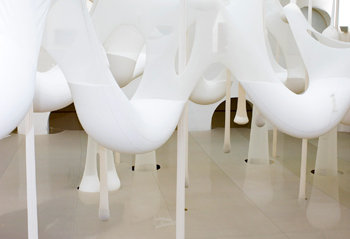 Pursuing the video investigations of the last few years and their focus on the animal world – The Quarry (2003), Façade (2006), Roaming (2008) – in 2007 Tania Mouraud set off to film migrating grey whales in the lagoons of Baja, in Mexico. Every year some two thousand of these whales come here to reproduce, before continuing on to Alaska in April with their young. Drawing inspiration from the Maritime history of Nantes, the artist has used her images to create a new video installation to be shown in the Chapel choir, together with a wrecked boat and a soundwork using on-site recordings. Ad Infinitum expresses life's power, but also its fragility and mystery.

As part of the second Estuaire festival, the Musée des Beaux-Arts de Nantes has invited Tania Mouraud to present a work in the Chapelle de l'Oratoire.

Catalogue published by Fage
This exhibition has the generous backing of GDF SUEZ.

The Musée des Beaux-Arts de Nantes has invited Ernesto Neto to present a work on the museum patio to mark the second Estuaire festival. The artist will partially recreate Leviathan Toth, originally commissioned by the Ministry of Culture and shown at the Panthéon in Paris during the 2006 Autumn Festival.

The museum regularly calls on artists to bring a new work to the patio. Previous invitees include Sarkis (1997), François Morellet (2007) and Anish Kapoor for the first Estuaire in 2007.

A Culpa Civilizada (Civilised Guilt) is a concentrate of Neto's practice, a suspended sculpture of soft, transparent polyamide tulle whose filling of polystyrene beads, sand and sugar gives it a multisensory dimension.

Neto always takes care to set up a link between the exhibition venue and the work being shown. Here on the patio the discrepancy between the museum's architectural austerity and the work is flagrant; and the same kind of tension is in the sculpture itself, in which substance and gravity contrast with the transparency of the nylon and sheer size with the fragility of the material.

In addition the patio can be viewed from the first floor, which means visitors can approach the work from all angles : from above, from below and, of course, from inside.

A Culpa Civilizada implicitly calls up an episode in the history of Nantes, that of the "triangular trade". Visiting the Nantes History Museum, the artist was particularly touched by the way this system functioned: raw materials and manufactured goods in exchange for slaves. And so the presence of sugar in the work points up the mercantile practices of the time.

The exhibitions will be open every day, including Tuesdays during the Estuaire festival (5 June - 16 August).