Suspens (suspend). Since the late 1980s, Cecile Bart has induced viewers to experience seeing as an integral part of the world instead of detached from it. The paintings are sometimes decor, sometimes moving bodies, and also part of an exhibition of the scenes created by the paintings themselves, to which are added the presence of the visitors. 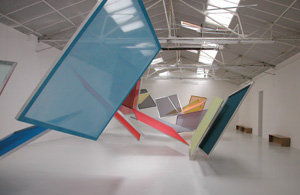 All through the summer and up until October 24, the works of artist Cécile Bart will fill the premises of the Frac Bourgogne in the context of a commissioned exhibition. Since the late 80s, Cécile Bart has induced viewers to experience seeing as an integral part of the world instead of detached from it. The exhibition, which is entitled Suspens [Suspend], uses peintures/écrans [paintings/screens] to explore sensations of weight and elevation. An interplay of space, bodies, light and colors invites the public to partake of an experience which is at once dense and light, concentrated and joyful. This is the particular dynamic which characterizes the artist’s work.

As a continuation of the propositions Cécile Bart made with her exhibitions Habiter (at the Villa Arson in Nice in 1995) and Tanzen (at the Kunsthaus of Aarau in 1998), the exhibition at the Frac Bourgogne will put her peintures/écrans [paintings/screens] in the space as if on stage. In Dijon, as in past exhibitions, the paintings are sometimes décor, sometimes moving bodies, and also part of an exhibition of the scenes created by the paintings themselves, to which are added the presence of the visitors.

Indeed, Cécile Bart’s paintings are sensitive tools for exploring the reality of a place and everything that gives life to it. This investigation is carried out by means of an association between different framings in space, which are called peintures/écrans. These consist of see-through “canvases” made of voile stretched on aluminum frames of various sizes and hand-painted in different colors. The paint is applied and wiped dry as many times as is necessary to obtain the desired density of color.
This choice of medium for the paintings is essential. Once placed in the space, the painting remains translucent; light space (are they reaching toward the ground or rising up from it?) and to time, in the same way that an image of a film can be frozen – cinema being one of the artist’s favorite media. The perception of each peintures/écrans is provoked, nourished and ceaselessly transformed by the elements of its arrangement in space taken as an ensemble. In fact, paintings/screens become part of the space. Cécile Bart likes calling this practice “staging” rather than “installation.” This reference to the performing arts highlights the fact that the work really exists in so far as it is experienced, in a reality which includes temporality. “The ideal viewer would be one who takes his time, finds his own rhythm. The perception of the work would change during a stroll which takes a certain time, with pauses and readjustments... It’s like scouting a location. You approach a place, spread out and then find what you’re looking for 2.”

Cécile Bart conceives her exhibitions by very precisely organizing the peintures/écrans. The preparatory collages and models she makes give insight into the importance that the combinations in space have. Within the exhibition itself, the material aspect of the layout is assumed to be part of the work. It enables Bart to produce brilliance, bursts of energy, levity. This concrete passes through it and it can be seen through. Its material aspect immediately distinguishes it from the autonomous painting since it is almost impossible to look at the color alone. Everything which enters into the frame of the transparent painting/screen: other frames and other colors, the place, its particular architecture and light, other viewers... is projected onto it.

For the Dijon exhibition, Cécile Bart has worked with the panoramic vision which one has from the entrance, as well as the depth of the exhibition space and the light which bathes the place from high over head. The visitor can choose to stay on the edge with not much depth of vision, as if in the front row of a theater or cinema. He/she can look at the work from just outside or enter the stage, plunge into it. In neither case is the spectator static, but rather can accept the invitation to move around, and let his eyes playfully explore the colored forms suspended in space. “Seeing is no longer a passive function of the eye which records reality with fidelity, but rather a productive activity which takes place in time.”1 The forms in suspense remain unresolved both with regard to the procedure is nonetheless neither authoritarian nor closed, since on the one hand, the work doesn’t fill the whole space (there are holes, things out-of-bonds) and on the other, the artists leaves it open to what might happen. She doesn’t try to anticipate everything which might come and bring it to life – in particular, the nature of the wanderings of the visitors, and the infinite plays of light.

This is why Cécile Bart’s creations touch on questions of abstraction, organization of colored forms in space, pertinent to the present-day context. By integrating the body of the viewer, the temporality of his movement, the modulations of daylight, and multiple interactions with the space, Cécile Bart places painting on an equal footing with the world – open to the events which cross it, without getting suspended.

This exhibition is produced with the support of the Ministry of Culture and Communication (DRAC: Regional Direction of Cultural Affairs of Burgundy), the Burgundy Regional Council and the General Council of Côte-d'Or.