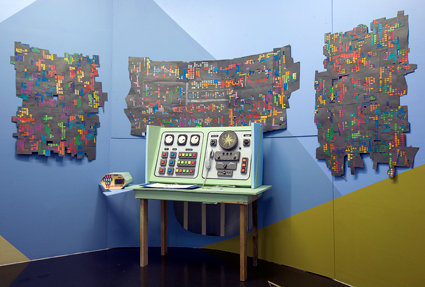 Curated by What, How and for Whom/WHW, Zagreb

"The most hackneyed communist platitude has more hierarchies of significance than contemporary bourgeois profundity, which only ever signifies apologetics."
Walter Benjamin, Letter, March 7, 1931.

The exhibition 'Red Thread' is conceived as a 'prologue' to 11th International Istanbul Biennial (12 September - 8 November, 2009). The Biennial is entitled 'What Keeps Mankind Alive?', which is the English translation of the protest song 'Denn wovon lebt der Mensch?' from The Three Penny Opera, written in 1928 by Bertolt Brecht, in collaboration with Elisabeth Hauptmann and Kurt Weill. 'The Three Penny Opera' thematises the process of redistribution of ownership within bourgeois society and sheds an unforgiving light onto a variety of elements of capitalist ideology. Brecht's assertion from this play, that 'a criminal is a bourgeois and a bourgeois is a criminal' is as true as ever, and the correspondences of rapid developments of liberal economy on disintegration of hitherto existing social consensus in 1928 and in present times are striking.

The concept of the Biennial proposes not to go back to Brecht as a classic that needs to be rediscovered and shown to new generations, but rather to reflect on latencies of the past in the present and investigate possibilities of art to re-examine old and open new relationships between social engagement and aesthetic gesture.

'Red Thread' exhibition presents artistic positions related to Biennial themes and process of its inception, creating fragmented narratives dealing with questions of auto-histories, self-positioning, post-colonial context, dataesthetics, corporeality, religious hypocrisy, reinterpretation of (art) history and critical artistic engagements in non-central zones of Western project of modernism. The title 'Red Thread' refers to the continuity of aspiration to imagine in reality the consequences of a new possibility repressed by the dominant state of affairs, as the guiding principle that threads and circulates through times and places. The thread may stretch, meander or bifurcate, but it never breaks. The 'Red Thread' is a metaphor for invisible but vital relations that in continuo link up different endeavors and explorations regardless of their spatio-temporal determinations.

The 'Red Thread' exhibition in Tanas continues the opened research process of 11th International Istanbul Biennial, started through a series of round table and public lectures under the same title, organized in Istanbul in 2008 and 2009.

TANAS is an initiative of the Vehbi Koç Foundation, Istanbul.