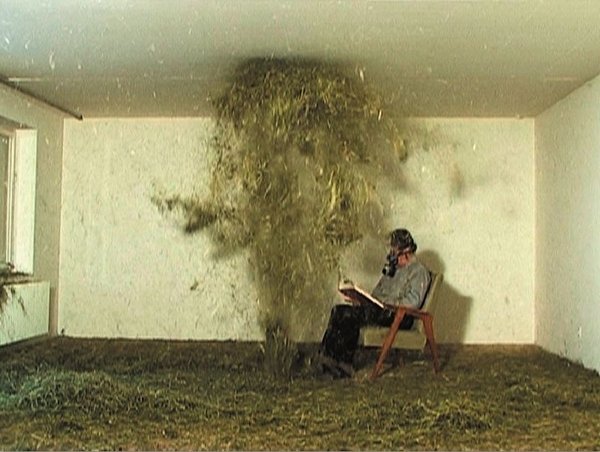 The Swiss artist Roman Signer works with time as if it were just another artistic material, using it to create what he calls “events”: sculptures that are transformed in and by time. Many of them have been documented on film or were conceived as filmed pieces. In his projections of films and videos Signer focuses on a central theme in his work: the exploration of materials and time in relation to the moving image. In cooperation with Helmhaus Zürich, the Hamburger Kunsthalle is presenting a selection of 33 of his film works spanning the period between 1975 and 2008.

Signer stages his sculptural “events” in collusion with and pitted against gravity. The sites where they occur are indeterminate: they could just as well be indoor contexts as outdoor landscapes like the banks of a river, a mountain, a forest, the entrance barrier of a car park or an old industrial chimney stack. The artist’s sculptural imagination combines them into an equally simple and expressive form, which is then documented on film. He also frequently works with concrete objects, setting them in motion and employing compelling poetic language to devise his sculptural designs and technical constructions. Signer became known for his works involving explosives. He uses detonations to temporarily suspend the inertia of things: chairs learn how to fly; water spouts out of a pair of gumboots; a streamer tied to a rocket meditatively draws a long line across the blue sky. Certain means of transport – the bicycle, the kayak and the model helicopter – are recurrent motifs in his sculptural oeuvre, which spans more than thirty years. He considers these objects as sculptures and at the same time invests them with a functional role.

For all their spectacular effects, his works also have a subtly humorous and detachedly tranquil side. A key dimension of his events is the period of their preparation and the hiatus of waiting for the decisive moment, joined with the wish to understand them. Such events are developed for the purpose of their observation. We grasp them intuitively and, in laughter, through the physical experience of the intellect. Natural forces such as water, wind, river currents or light are visualized in a sensuous and tangible form. Signer uses these objects and physical phenomena to create tragicomic images that address fundamental moments of the human condition such as suffering, innocence, injustice, shock or amazement.

Roman Signer (born in 1938 in Appenzell, Switzerland; currently lives in St. Gallen) has created an extensive and varied oeuvre comprising sculptural works, photography and drawings. Besides his works in public spaces, Signer has also been hosted in numerous exhibitions – e.g. in 1981 in the Kunsthaus Zürich, in 1988 in the Kunsthalle St. Gallen, in 1993/94 in the Kunstmuseum St. Gallen, in 1999 at the Venice Biennale, in 2000/01 in the Bonnefantenmuseum in Maastricht, in 2003 in the Collection Hauser & Wirth in St. Gallen, in 2005 in the OK Center for Contemporary Art in Linz, in 2006 in the Centro Galego de Arte Contemporánea in Santiago de Compostela, in 2007/08 in the Fruitmarket Gallery in Edinburgh and in 2008 in the Rochester Art Center.

Signer’s most recent video works were created in collaboration with Aufdi Aufdermauer. The 33 projections being shown by the Hamburger Kunsthalle will be presented in specially constructed spaces on the basement floor of the Galerie der Gegenwart. These are joined by two monitor installations, one sculpture, an action and a kinetic installation in the atrium of the Galerie der Gegenwart. The title of the exhibition, “Projections”, reflects the character of these works as visionary and prospective drafts.

The catalogue (English edition) Roman Signer: Projections. Super-8 Films and Videos 1975–2008 is published by Steidl, Göttingen (German edition published by Scheidegger & Spiess, Zurich). The publication has been conceived as an oeuvre raisonné of the artist’s entire production of super-8 films and videos and provides stills from each work. The catalogue is available from the museum shop for EUR 65.