The Zurich Trial, Part 1: Witness for the Prosecution 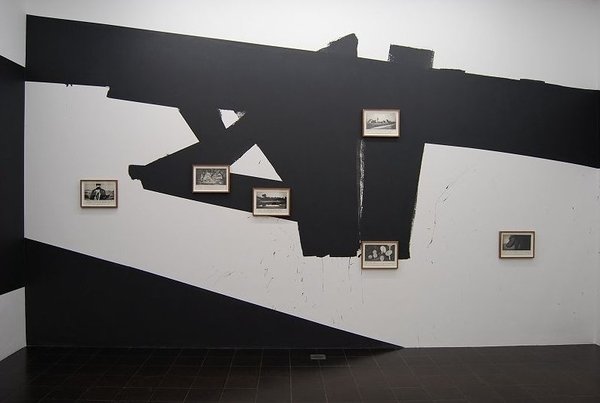 Born in 1965 in The Hague, Marcel van Eeden is one of the leading draughtsmen of his generation on the international art scene. In extensive series of drawings he combines real biographies with fictional narratives to reconstruct the history of the period from the 1920s to the 1960s. Since 1993, van Eeden has produced at least one drawing a day that he posts on the internet and also incorporates into his large-scale series. The predominantly black-and-white drawings he creates are based on images from magazines and films dating from before 1965 – the year he was born. In his choice of subjects, however, van Eeden deliberately avoids well-known historical events or locations, focussing instead on everyday places and banal situations which he reformulates and subordinates to his own visual narrative. The works often feature passages of texts from T. S. Eliot’s play The Cocktail Party combined with van Eeden’s visual motifs.

Van Eeden employs the same distinctive drawing technique – involving Nero pencil on paper – throughout his work, and the format of his black-and-white drawings rarely varies; usually small in size, they seem like surrogates for a bygone era. There is an air of cool detachment about them, but at the same time they are often poetic or humorous due to the juxtaposition of text and image.

Marcel van Eeden became widely known in 2006 for his extensive series K. M. Wiegand. Life and Work (2005/06), which was his contribution to the 4th berlin biennial. Over the last few years he has developed a distinctive and complex oeuvre that includes other large-scale series of drawings such as Celia (2004–2006) and The Archaeologist. The Travels of Oswald Sollmann (2007). In his most recent series, Witness for the Prosecution (2008–2009), van Eeden brings together stories and protagonists from his other works, opening up a new set of possibilities and at the same time offering resolutions to the previous narrative threads.

Witness for the Prosecution will be shown for the first time as a complete series at the Hamburger Kunsthalle. It comprises around 150 drawings, a third of which were made over the last few months. Van Eeden has developed a special form of presentation for this new series, creating large-scale wall drawings that not only provide a striking backdrop for the works on display but also break down the traditional notion of exhibition hanging.

A fully illustrated publication accompanies the exhibition and is available from the museum shops for EUR 14.