Huge landscapes directly painted by Yan Pei-Ming on the walls of UCCA's Big Hall frame a series of painted flags representing portraits of 34 children. Imagined as an abounding walk trough faces and urban views, the exhibition powerfully conveys his intentions and gives the audience an opportunity to discover a striking vision of our world in a landscape of crisis and beyond. As part of the Curated by series, Temperature is an exhibition of emerging artist Yan Bing. Isabelle Huppert: Woman of Many Faces gathers about 100 photo and video portraits of French actress created by an international group of leading photographers. 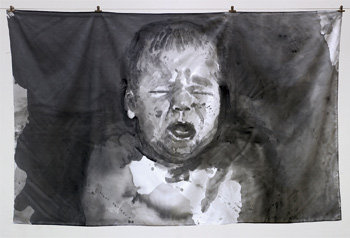 "Yan Pei-Ming has become the ultimate artist portraying the iconic characters of our time. His work stands as a major reference on the international contemporary art scene and this show should remain a milestone in history since it features the icons of tomorrow: the next generation of Chinese citizens framed into an empty landscape, the future'', says Jérôme Sans, UCCA Director and co-curator of Landscape of Childhood.

Huge landscapes directly painted on the walls of UCCA's Big Hall frame a series of painted flags representing portraits of 34 children. Imagined as an abounding walk trough faces and urban views, the exhibition powerfully conveys Yan Pei-Ming's intentions and gives the audience an opportunity to discover a striking vision of our world in a landscape of crisis and beyond.

Yan Pei-Ming is famous for his monochromatic large portraits executed in either black and white or red shades. "I have never felt it necessary to put some things around the persons; I just want to draw portraits," explains the artist.

Born in Shanghai in 1960 and living in Dijon, France, since the early 1980s, Yan Pei-Ming has always been interested in the concepts of individuality and anonymity expressed in the portraits and landscapes he paints. He has been one of the first Chinese artists to settle and build his career abroad.

As part of the Curated by series, UCCA is pleased to present Temperature, an intriguing exhibition of emerging artist Yan Bing Curated by leading Chinese painter Liu Xiaodong. The show displays installations and paintings made with organic material and form. Earth, cow skin, animal shapes and rough surfaces create genuine art works interweaved with the artist's memory and nostalgia.

"Yan Bing demonstrates an extraordinary maturity in his works, recalling a certain inspiration from the Arte Poverra movement yet imposing his own sense of material and shape to create this artistic universe whose heart beat is highly palpable," feels Jerome Sans, UCCA Director.

Among the reasons why he has chosen Yan Bing for this edition of Curated by, Liu Xiaodong explains: "In the age of globalization and superfast consumption, we don't need to care about anything. Computers help us remember everything, and flesh and soul can be easily swapped like excess commodities. Even battlefields are no longer littered with corpses, just as electronic games leave us with no traces. However, Yan Bing brings us traces, traces with a temperature. Yan Bing's trace is in fact a handful of soil, which suddenly becomes so concrete in his hand, so incredible and with a temperature". Being still in front of this temperature…we reflect on what we have done, what we ought to do and ought not to.

For Yan Bing, "if all things have their own spirits, then a spade shall have its personality and a pile of mud shall have its own temper. When all the details of this world have been over-defined, are we embodied with more wisdom or less? When all we see has been conceptualized and thus has lost what makes it interesting, I would rather go back to the age of innocence".

The Artist
Yan Bing, born in 1980, in Gansu Province, graduated from the Third Studio of Oil Painting Department of the Central Academy of Fine Arts in 2007. He now lives and works in Beijing. Temperature is his first exhibition in an institution.


Curated by is UCCA's branded initiative to support the next generation of Chinese artists. Intending to give artists their first opportunity for a solo show, Curated by will make a series of exhibitions at UCCA in 2009.

UCCA presents, as part of Croisements Festival 2009, Isabelle Huppert: Woman of Many Faces, an ambitious photo show initiated by the Museum of Modern Art / P.S.1, New York, for the first time in China. The exhibition gathers about 100 photo and video portraits of French actress Isabelle Huppert created by a multi generational, international group of leading photographers. For this unique Chinese issue, the project will include new works by the upcoming generation of Chinese artists: Yang Fudong, Wen Fang and Shi Xiaofan.

"The idea of having young Chinese photographers giving their very own creative vision of a Legendary French star broadens the 'Huppert' myth and give it an unprecedented resonance in China. We are glad to be the place where the two worlds meet". Said Jerome Sans, UCCA Director and co-curator of Isabelle Huppert: Woman of Many Faces.

Isabelle Huppert: Woman of Many Faces has already been presented in over seven important institutions, including the Musée d'art Moderne/Couvent des Cordeliers in Paris, the Galerie C/O in Berlin, the Gallery of the Botanical Garden in Madrid, the Metropolitan Museum of Photography (Tokyo). The exhibition is actually shown at the Gemeentemuseum of Den Haag (The Netherlands) until June 17th 2007.

The more than 250.000 visitors who have visited the show so far, confirm the public's interest in this exhibition, which can be further described as a « history of the photographic portrait in the last decades of 20th Century ».

This exhibition is organised as part of Croisements Festival with the support of the French Embassy. It is produced by Joany Edition. Croisements Festival (www.faguowenhua.com) has been taking place every year since 2006. Organised by the French Embassy, it aims at promoting exchanges and collaborative works between Chinese and French artists and cultural institutions.

Sponsors and Partners for the production